(American Actress Who was Known for Playing Unsympathetic, Sardonic Characters)

“Why am I so good at playing bitches?” Bette Davis, the legendary Hollywood actress, once asked in an interview. “I think it’s because I’m not a bitch,” she answered in the same breath and did not forget to add, “Maybe that’s why [Joan Crawford] always plays ladies.” That was Bette Davis; straight and to the point, never mincing her words. In fact, many of her friends believed that she actually enjoyed being labeled an ‘A Class Bitch’ and that too in an era when ladies who spoke their mind were sent home. However, her personality and acting skills were such that she could be despised, but never dismissed. She went on to become the ‘First Lady of Film’ and won innumerable awards throughout her acting career, which spanned 60 years. From historical and period movies to contemporary crime thrillers and romantic films, this two-time ‘Academy Award’ winner acted in more than 100 films. Moreover, she never flinched from taking up unsympathetic roles; instead she took them up as a challenge. Bette Davis was truly a genius who is revered by many, years after her death. Priscilla Presley
5th April In History
DID WE MISS SOMEONE?
CLICK HERE AND TELL US
WE'LL MAKE SURE
THEY'RE HERE A.S.A.P
Quick Facts

Bette Davis was born Ruth Elizabeth Davis on 5 April 1908, in Lowell, a city in the state of Massachusetts in the United States of America. Her father Harlow Morrell Davis was a patent attorney and her mother was Ruth Augusta. Bette also had a younger sister named Barbara Harriet or Bobby.

Her parents separated in 1915, when Bette was barely seven years old. She and Bobby were raised by their mother Ruth. They were initially sent to ‘Crestalban,’ a Spartan boarding school in Lanesborough. Later, Bette attended ‘Cushing Academy,’ which is said to be the oldest coeducational boarding school in the United States.

In 1921, Bette moved to New York City with her mother and sister. Here, Bette was introduced to the glamorous world of entertainment. She initially wanted to become a dancer, but later found acting to be more alluring. To hone her acting skills, she joined the ‘John Murray Anderson School of Theatre.’ 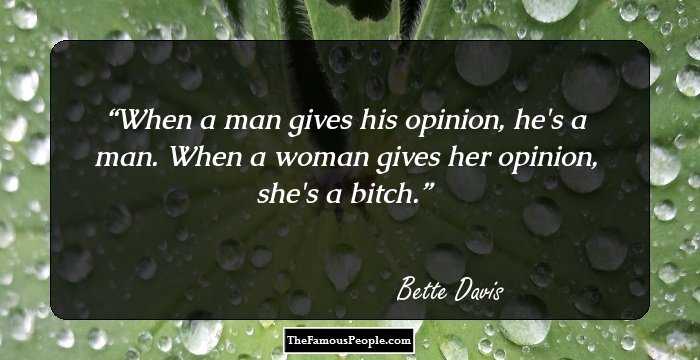 In 1928, Bette Davis started her career as a chorus girl in the play ‘Broadway’ in George Cukor's stock theater company. It was only a one-week stint; nonetheless, it was the first paid acting assignment she got.

She made her stage debut in the 1929 play ‘The Earth Between’ at Greenwich Village's ‘Provincetown Playhouse.’

In 1929, Bette made her Broadway debut with a role in the comedy ‘Broken Dishes.’ She also acted in ‘Solid South.’ While acting in these shows, Bette Davis was spotted by a talent scout from ‘Universal Studio’ and was invited for a screen test.

Accompanied by her mother, Bette set out for Hollywood in 1930. However, she not only failed the initial screen tests, but was also humiliated in every possible way. Yet, she did not give up.

In 1931, she made her film debut in the movie ‘Bad Sister.’ The film failed at the box office. In the same year, she acted in two other films under ‘Universal Studio’: ‘Seed’ and ‘Waterloo Bridge.’

1932 was an important year for Bette Davis. Still a part of the ‘Universal Studio,’ Bette was first lent to ‘Columbia Studio’ for a role in the movie ‘The Menace’ and then to ‘Capital Films’ for the movie ‘Hell’s House.’ However, none of the movies succeeded at the box office and so her contract with the ‘Universal Studio’ was terminated. Bette decided to go back to New York. But the fate willed otherwise.

As Bette was packing to go back to New York, she received a call from actor and filmmaker George Arliss, who offered her the lead role in the ‘Warner Brothers’ movie ‘The Man Who Played God’ (1932). She accepted the offer and played the character of ‘Grace Blair’ in the film, which eventually became the turning point in her life. ‘Warner Brother’ also offered to employ her, starting with a weekly salary of $400. The contract was signed for five years.

In 1934, Bette Davis played the character of ‘Mildred Rogers’ in the movie ‘Of Human Bondage’ and earned huge critical acclaim for her performance. It was a negative character, which many other actresses had refused. However, Bette Davis found in it an opportunity to showcase her versatility and took it up willingly. She received a significant number of ‘Write-in-Votes’ for the ‘Best Actress Oscar’ for her role in this film; but ultimately failed to win the award.

Bette won her first ‘Academy Award’ for ‘Best Actress’ in 1935 for her role in the movie ‘Dangerous.’ Unfortunately, she was mostly offered mediocre roles during this period and the production house did not allow her to work independently. Consequently, she tried to cancel her contract with ‘Warner Brothers.’

In 1936, Bette Davis was entangled in a legal case with ‘Warner Brothers.’ Ultimately, she lost the case and had to resume acting under their banner. Eventually, her relationship with the company became cordial.

From 1937 to 1949, she appeared in many successful films and even received an ‘Academy Award’ nomination for her role in the movie ‘Jezebel’ (1938). The movie ‘All This, and Heaven Too’ (1940) also earned a huge profit at the box office. The movie ‘The Letter’ (1940) was another hugely popular film of this period. However, when her contract with ‘Warner Brothers’ ended in 1949, her career graph reached an all-time low. She then struggled to land good roles.

Bette Davis made a comeback in 1950 with the role of an aging actress in the movie ‘All About Eve.’ However, very soon, her career came to a standstill.

Not the one to give up, Bette made another comeback in 1962 and received an ‘Oscar’ nomination for her role as a former child star in the movie ‘What Ever Happened to Baby Jane?’ ‘Strangers: The Story of a Mother and Daughter’ (1979) also earned her rave reviews.

In the 1980s, she worked in several TV shows and films. ‘The Whales of August’ (1987) is one such film, which received much critical acclaim. 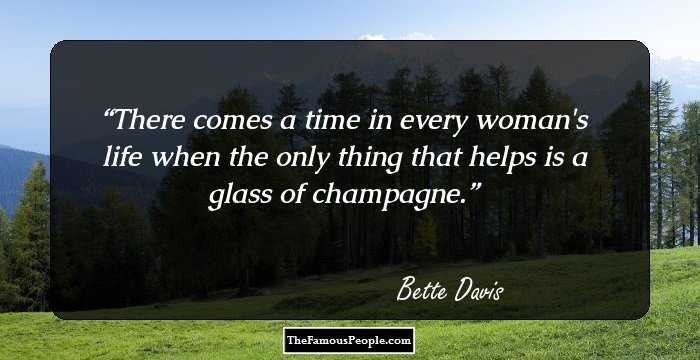 Bette Davis’ performance in movies like ‘Of Human Bondage’ and ‘Dangerous’ garnered her rave reviews. She received an ‘Oscar’ nomination for the former and won an ‘Oscar’ award for ‘Best Actress’ for the latter. Her performance as the spoiled Southern belle in the movie ‘Jezebel’ was also highly appreciated. Her role in the film earned her another ‘Academy Award.’ ‘The Lonely Life’ is the first autobiography written by Bette Davis. The book, published in 1962, talks about the most important part of her acting career. ‘This 'N That’ is her second memoir. It was co-authored by Michael Herskowitz and was first published in 1987. The book mainly talks about her life post 1962. Apart from her acting career of the 1970s and 1980s, it also talks about her illness and recovery from a major stroke.

In 1936, Bette Davis won her first ‘Academy Award’ for ‘Best Actress’ for her role of a troubled actress in ‘Dangerous.’

In 1939, she won the ‘Academy Award’ for ‘Best Actress’ for her role in ‘Jezebel.’ In this movie, she played the part of ‘Julie Marsden,’ a spoiled and strong-willed girl.

In 1979, Bette won the ‘Primetime Emmy Award’ for ‘Outstanding Lead Actress in a Limited Series or a Movie’ for her role in ‘Strangers: The Story of a Mother and Daughter.’

For her outstanding contribution to the world of entertainment, Bette won the ‘Golden Globe Cecil B. De Mille Award’ in 1974 and ‘AFI Life Achievement Award’ in 1977.

In 2008, the ‘United States Postal Service’ honored her with a commemorative postage stamp. 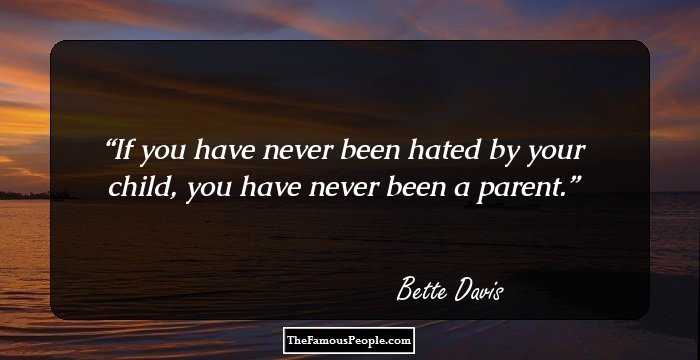 Bette Davis was married four times. She married Harmon Nelson in 1932. However, Nelson was not as successful as Bette in his career and this had a negative repercussion on their married life. They divorced in 1938.

Bette then met William Grant Sherry. The couple got married in 1945 and had a daughter named Barbara Davis Hyman. This marriage too did not last long. They divorced in 1950. Her relationship with her daughter deteriorated in later years. Ultimately, Bette disinherited her.

In 1950, Bette married Gary Merrill, an American actor. Apart from Barbara, the couple adopted two more children, Margo and Michael. This marriage too ended in divorce in 1960.

Bette died from breast cancer on October 6, 1989, at the ‘American Hospital’ in Neuilly-sur-Seine, France. She was 81, and was returning home from Spain after attending the ‘Donostia-San Sebastián International Film Festival.’ Her body was brought back to Hollywood to be interred alongside her mother Ruth Davis and sister Bobby. The epitaph on her grave stone sums up her life. It says, “She did it the hard way.”

Quotes By Bette Davis | Quote Of The Day | Top 100 Quotes

See the events in life of Bette Davis in Chronological Order