Roseanne Cherrie Barr is a famous American standup comedian, television, film and theatre actress, writer, director, and producer. She is famous for her quick wit, caustic comments and intelligent as well as funny insights into the relationship between man and woman and a woman’s struggle as ‘domestic goddess’. She started off her career as a standup comedian by doing standup acts in local clubs of Denver and Colorado, after running away from her parents’ home at the age of 18. Soon her perfect comic timing was recognized on the American television when she first came up with her own show on HBO, ‘The Roseanne Barr Show’. She was offered, what became the most prominent work in the entertainment career, ‘Roseanne’ on ABC. It ran for a successful nine seasons and earned her awards like, Emmy, Golden Globe, etc. After that, she had many shows of her own, co-hosted many famous shows, worked in movies, theatre, gave voiceovers, wrote books, etc. With her liberal political views, she also tried for 2012 presidential elections. Barr had a tough childhood, which has reflected in her personal relationships from time to time - she has been married for three times and has five children from her different marriages. 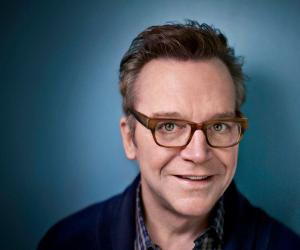 American People
Actresses
Comedians
American Women
Utah Actresses
Childhood & Early Life
Roseanne Barr was born on November 3, 1952, in Salt Lake City to Helen and Jerome Hershel Barr. Her father was a salesman while mother a bookkeeper. She belonged to a working-class Jewish family.
Barr had a difficult childhood as she suffered from Bell’s palsy when she was three years old. She also suffered with a traumatic brain injury at the age of 16, which led to her institutionalization at Utah State Hospital. 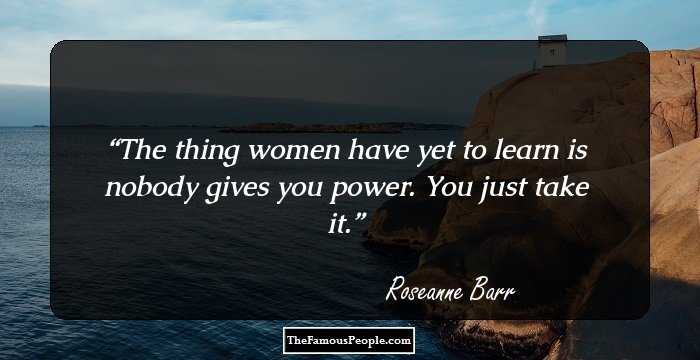 Quotes: You, Women, Power
Continue Reading Below
You May Like

Famous Beautiful Women With Green Eyes
Career
During the early 80s, Burr decided to become a stand-up comedian, for which she used her experiences as a mother and a wife as her comic material and performed at local clubs in Denver and Colorado.
She also made little appearances on major shows like, ‘The Comedy Store’, ‘The Tonight Show’, ‘Late Night with David Letterman’ and in 1987, she had her own show on HBO, ‘The Roseanne Barr Show’.
From 1988-1997, Barr became a popular television figure with her own show on ABC, ‘Roseanne’. She played herself in the sitcom—hard and soft, wise-cracking mother. It won her many awards like, Emmy, Golden Globe, Kids’ Choice Award.
While she was still a rage on the television, Barr released her autobiography in 1989, titled ‘Roseanne - My Life As a Woman’. She also appeared in the movie, ‘She-Devil’ in the same year.
Throughout the ‘90s, she did variety of entertainment projects like: voice-over for ‘Look Who’s Talking Too (1991)’, appearances on ‘Saturday Night Live’ and released another autobiographical account, titled ‘My Life (1994)’.
Barr tried out theatre acting in 1998 and played the role of ‘Wicked Witch of the West’ in the Broadway production of ‘The Wizard of Oz’ at Madison Square Garden. She started her own talk show, ‘The Roseanne Show’ in the same year.
After ‘The Roseanne Show’ got cancelled in 2000, Barr took a big break from the entertainment business. She returned back on television once again as a stand-up comedian with ‘Roseanne Barr: Blonde N Bitchin’ in 2006.
In the late ‘2000s, Barr became more involved with television - hosted ‘The Search for the Funniest Mom in America’ on Nick, and also co-hosted an hour long political shown on KPFK. She was ‘roasted’ by Comedy Central in 2012.
She filed with the Federal Election Commission as a Green Party presidential candidate in 2012 and formally announced her candidacy for the party’s 2012 presidential nomination.
Continue Reading Below
She lost the nomination and announced that she would run on the Peace and Freedom Party ticket with activist Cindy Sheehan as a running mate. She won the nomination this time. 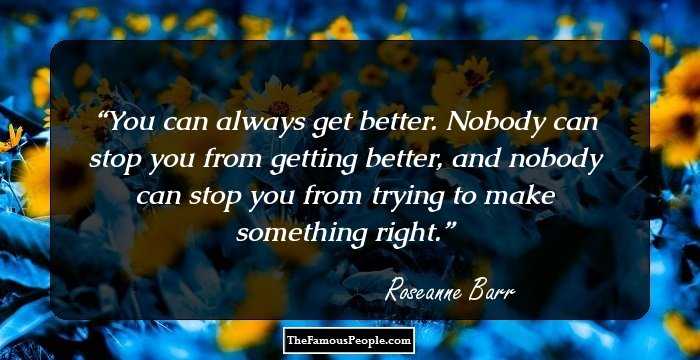 Quotes: You, Trying
Major Works
Barr’s most prominent work is considered to be her shown on ABC, ‘Roseanne’ that ran for 9 seasons. The portrayal of the character, which was close to her personal life, earned her prestigious awards like, Emmy, Golden Globe, etc.
Awards & Achievements
‘Roseanne’, which ran from 1988-1997, earned Burr awards like: five ‘People’ Choice Award’, three ‘American Comedy Award’, Emmy, Golden Globe, GLAAD Media Award and TV Land Award. 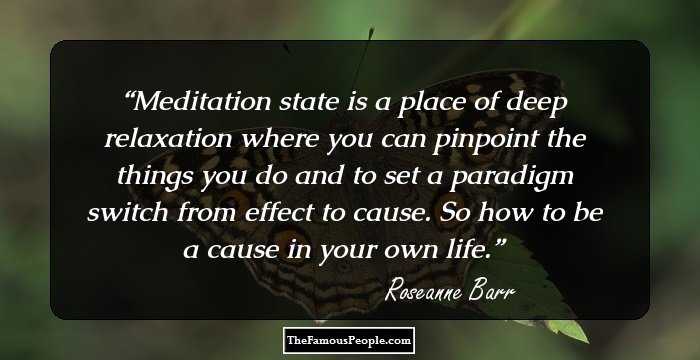 Quotes: You, Life
Personal Life & Legacy
In 1974, Barr married Bill Pentland, a motel clerk, in Colorado and the couple had three children: Jessica, Jennifer and Jake. The marriage worked out for 16 years and they got divorced in 1990.
Barr married a fellow comedian, Tom Arnold, in 1990. She met him for the first time in Minneapolis, where her stand-up act was opened by him. The marriage only lasted until 1994.
She got married for the third time to Ben Thomas, her personal security guard, in 1995. The couple went through in-vitro fertilization to have a son named Buck. Their marriage survived until 2002.
She began dating Johnny Argent in 2003 and lives with him in Hawaii.
Trivia
She has gone through surgeries like breast reduction, tummy tuck, nose job and gastric bypass surgery.
She is a Kabbalah disciple.
She has a lesbian sister, Geraldine Barr and a gay brother, Ben Barr.
She accused her parents of sexually abusing her as a child but later took the accusation back on ‘The Oprah Winfrey Show’.
At the age of 18, she moved out of her parents’ house and never returned back to them.
She got pregnant at 17 and gave birth to a baby but placed the baby for adoption. Many years later they were reunited.

Quotes By Roseanne Barr | Quote Of The Day | Top 100 Quotes

See the events in life of Roseanne Barr in Chronological Order