Robert Clark “Bob” Seger is a rock and roll musician best known for his album ‘Night Moves’. Initially a Detroit based singer and songwriter, he was a huge local success even before entering the national music scene in the U.S. The raspy voiced singer is also very talented at playing the guitar and piano. Primarily a roots rocker, his music deals with folk, blues, country music and the subsequent creation of sub-genres like country rock and southern rock. He was exposed to music from an early age as his father used to play several musical instruments and he was also inspired by musicians Little Richard and Elvis Presley. Seger’s songs are classical examples of heartland rock and focus on topics like love, women, issues of working class, etc. with which the common people could easily connect. His fame began to peak during the decades of 1970s and 1980s when heartland rock became one of the most popular rock genres in the U.S. His straightforward musical style combined with a concern for social causes endeared him to millions of U.S. citizens and made him a hugely popular rock star of his times. Bob Seger was born in Michigan to Stewart Seger, a medical technician and his wife Charlotte. He has one brother named George.

His father loved music and young Bob grew up listening to his father play various musical instruments. He was a big fan of Elvis Presley and Little Richard.

His parents had a troubled marriage and his father abandoned the family leaving his wife and kids to fend for themselves when Bob was just 10 years old.

He attended Pioneer High School and graduated in 1963.

Bob Seger formed his first band “the Decibels” in 1961 while he was still in high school with two of his school mates Pete Stanger and H.B. Hunter. 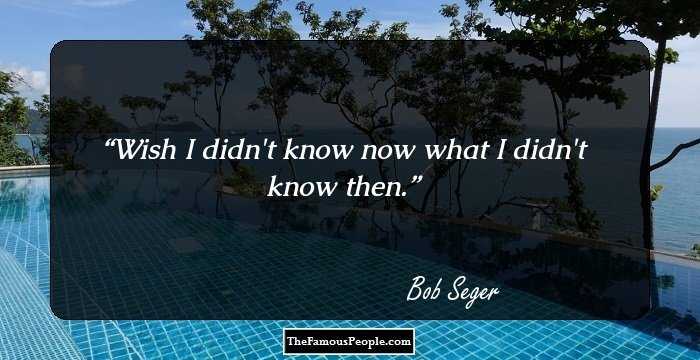 Bob Seger joined the band Town Criers as the lead vocalist. The other members included John Flis, Pep Perrine and Larry Mason. This band became very popular locally and had a steady following.

He left Town Criers to join a bigger band called the Omens headed by musician Doug Brown. It was with this band that Seger got his first appearance on an officially released recording in 1965 with the single ‘TGIF’.

Bob Seger and Doug Brown were approached by Edward “Punch” Andrews to write a song for the band Underdogs which Punch was managing. He also began writing and producing for the other bands managed by Punch before choosing him as his own manager.

He formed his backing band called The Last Heard consisting of his former band mate Pep Perrine, Carl Lagassa and Dan Honaker. He released ‘East Side Story’ with the band in 1966 which became a big hit in Detroit.

He released four more singles with The Last Heard, the most successful of which was ‘Heavy Music’, released in 1967. It became a top 100 hit in Canada. It went on to become one of Seger’s most loved songs.

Bob Seger and the Last Heard signed with the major label Capitol Records in 1968 and changed the name of the band to The Bob Seger System.

The band released its first album ‘Ramblin’ Gamblin Man’ in 1969. The album’s single of the same name became a major hit in Michigan.

Encouraged by their debut album’s success, they released another album ‘Noah’ the very same year. It failed to recreate the magic of its predecessor and Seger was bitterly disappointed with it.

The band’s third album, ‘Mongrel’, out in 1970, was also a commercial failure. Disheartened, Seger left the band in order to pursue a solo career.

He released his debut solo album ‘Brand New Morning’ in 1971. This album too was a failure. The musician struggled for the next few years in search of the success which he felt had unfairly eluded him.

In 1974, he formed the band Silver Bullet and released the album ‘Beautiful Loser’ in 1975. The album was a moderate success and marked the comeback of the disillusioned musician.

He got his first big breakthrough in 1976 with the release of the album ‘Night Moves’. The album was a critical as well as a commercial success and gave his stagnant career a big boost.

In 1978, Bob Seger brought out the album ‘Stranger in Town’ which became an instant hit. It contained the singles ‘Hollywood Night’ and ‘Still the Same’.

After releasing just two albums during the 1990s, Seger took a decade long sabbatical from music to spend time with his family.

In 2006, he came out with the album ‘Face the Promise’, which featured at number four on the U.S. Billboard 200 and was certified platinum in the U.S.

Bob Seger launched his farewell tour in 2018 and held his last concert in 2019.

His 1976 album ‘Night Moves’ was his first major big hit which made him a hugely popular rock star. The album went multi Platinum and spawned two Billboard Hot 100 hits.

The album ‘Stranger in Town’ was super hit and went multi-Platinum in the U.S and Canada, and was accredited Gold in the U.K. The single ‘Old Time Rock and Roll’ was listed among one of the Songs of the Century in 2001.

‘Against the Wind’ was his only album to ever reach number one spot in the U.S. Billboard 200, a position which it occupied for six weeks. It was accredited multi Platinum in both the U.S. and Canada.

His 1980 album ‘Against the Wind’ won two Grammy Awards in 1981: Best Recording Package and Best Rock Performance By A Duo Or Group With Vocal.

Bob Seger has had three marriages. He married Renee Andrietti in 1968; the marriage lasted for "one day short of a year". In 1987, he married actress Annette Sinclair and this marriage too ended in a divorce after a year.�
In 1993, he married Juanita Dorricott. The couple has two children.

Bob Seger was in a long-term relationship with Jan Dinsdale from 1972 to 1983.

He was inducted into the Rock and Roll Hall of Fame in 2004.

See the events in life of Bob Seger in Chronological Order