William Leonard Roberts II, popularly known as Rick Ross in the world of R&B and rap, is a famous American rap artist and record label owner. He has successfully released six studio albums until now and is the founder of the famous Maybach Music Group, along with other founding members like, Wale, Meek Mill and French Montana. Ross was into street music since a very young age, courtesy growing up in an impoverished area of north of Miami. He dropped out of college to pursue his dream of becoming a famous rap artist but he also got himself involved with the drug dealing business—the kind of culture he grew up in. Before signing his first record deal, Ross was a correctional officer for a few years—a thing that he has been ridiculed for many times in the media owing to his history of selling drugs. His very first single that released commercially was ‘Hustlin’’, which made him into a star as it was certified gold and it was because of this success that he got an opportunity to sign a record deal with Jay-Z’s Def Records. He has worked with various other rap and R&B artists in his career like, Ne-Yo, R Kelly, Flo-Rida, Diddy, etc. American People
Hip Hop Singers
American Men
Male Rappers
Male Singers
Childhood & Early Life
Ross was born in Mississippi and was brought up in the poverty stricken areas of north of Miami. Ross was attracted to street music since he was young and used to listen to artists like Notorious B.I.G., Luther Campbell, etc.
He got admission in Georgia’s Albany State University through a football scholarship but within a year he lost interest in the academics and started concentrating on writing rap lyrics while earning money from selling drugs.
He worked as a correctional officer in Florida during the early 1990s 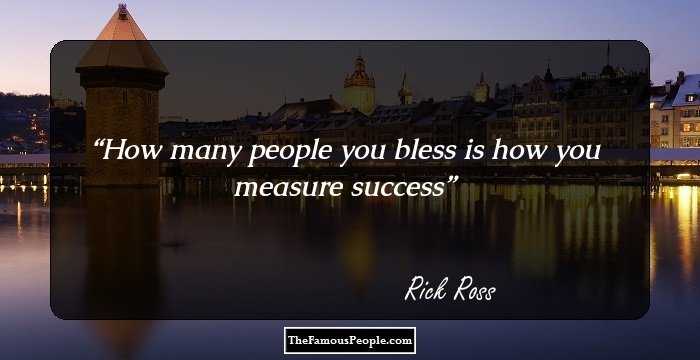 The Hottest Male Celebrities With The Best Abs
Career
Ross first got the opportunity to sign a deal with Suave House Records but eventually he signed the recording deal with Slip-n-Slide Records. Through this he got the opportunity to tour with Trick Daddy and feature on their albums.
Ross’ debut hit single ‘Hustin’’, which had a fascinatingly repetitive line ‘Everyday I’m Hustling’ throughout the song, became a smash hit and was certified gold and Ross became the hot new rap artist on the block.
His success struck a bidding war between various recording artists. Def Records, which was headed by the ace rap artist Jay-Z, won the bid and signed Ross to a famous record deal of that time.
Ross’ debut album ‘Port of Miami’ in 2006 peaked on the top position on the US Billboard 200. It received gold certification from the Recording Industry Association of America and had smash hits like, ‘Push It’, ‘Holla at Me’, etc.
He followed it up with ‘Trilla’—his second album that released in 2008. Ross dedicated it as a tribute to his idol Michael Jackson’s album ‘Thriller’. The album also peaked at number 1 position at the US Billboard Charts.
With his newly found success, Ross started to tour more often and made public appearances. He started to collaborate with other rap artists and wrote and performed rap with Jay-Z, R Kelly, Flo-Rida, Lil Wayne, Young Jeezy, etc.
His third studio album ‘Deeper Than Rap’ released in 2009 on his own label Maybach Music Group but the distribution was still under Def Recordings. It sold 158,000 copies in its first week in the US alone.
In the following year, he released his fourth album ‘Teflon Don’, which featured hit singles like ‘Super High’, ‘Live Fast, Die Young’ and collaborated with artists like Ne-Yo, Kanye West, etc. It peaked at No. 2 on the charts.
In the same year, he collaborated with Diddy, with whom he signed a management deal with his venture Ciroc Entertainment, on an EP that they were working together on. They released a single from the EP—‘Another One’.
Continue Reading Below
In 2012, Ross released ‘God Forgives, I Don’t’; the album featured singles like ‘You the Boss’, ‘I Love My Bitches’. It debuted at No. 2 on the UK R&B Album Chart and No.1 on the Billboard200--his highest-charting album.
Ross released his sixth studio album ‘Mastermind’ in 2013 by first releasing the single ‘No Games’ featuring artist Future. It features singles like—‘The Devil Is A Lie’, ‘War Ready’, etc. 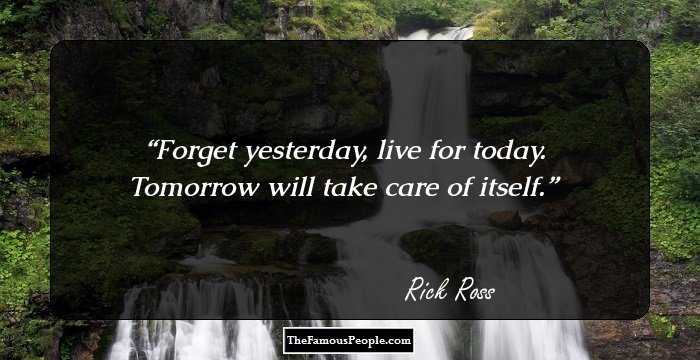 Quotes: Will
Major Works
Besides his rapping career and his trademark debut single ‘Hustlin’’, to which the whole world once grooved, Ross is best known for being the founding member of Maybach Music Group, which includes well-known rappers, such as Wale, French Montana, etc.
Awards & Achievements
MTV News ranked Ross on the fourth spot in its 2008 ‘Hottest MCs in the Game’ list among ten rappers. 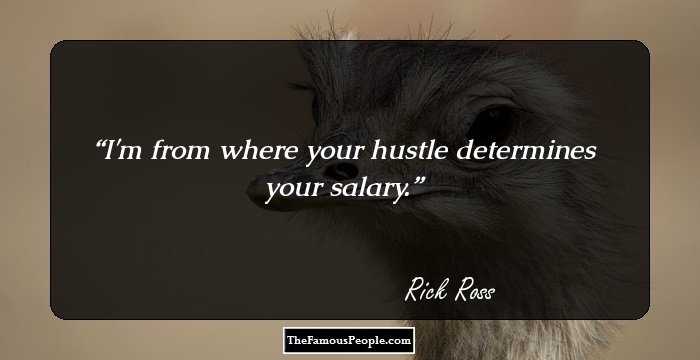 Personal Life & Legacy
Ross is in a relationship with Shateria Morange-EL.
Trivia
On his 37th birthday, Ross and his girlfriend were the targets of a drive-by shooting in Fort Lauderdale, Florida.
In 2008, ‘The Smoking Gun’ website exposed Ross for having previously worked as a corrections officer in South Florida.
In 2011, he suffered from two seizures in the same day.
Ross was arrested in Shreveport for possession of marijuana in 2011.
Ross started a dispute with rapper 50 Cent because according to him Cent looked at him the wrong way at the BET Awards in 2009.
Ross has appeared on television shows like, Jimmy Kimmel Live!, Late Show with David Letterman, Late Night with Jimmy Fallon, Chelsea Lately, Magic City, etc.
You May Like

See the events in life of Rick Ross in Chronological Order