Randy Bruce Traywick, popularly known as Randy Travis, is an American country and gospel singer, songwriter and actor. He has released 20 studio albums in his singing career and more than 50 of his singles have charted on the Billboard Hot Country Songs chart. Travis had a bit of a rough childhood and he was slowly turning into a juvenile delinquent, getting charged with theft and burglary, when he was saved by his future manager Elizabeth Hatcher who took him into her club as a cook and a singer. The relationship developed between them both personally and professionally and soon Travis signed a deal with Warner Bros. Records and released hit albums like, '‘Storms of Life’, ‘Always & Forever’, etc. He has sold over 25 million records, and has earned 22 number one hits, six number one albums, six Grammy Awards, six CMA Awards, nine ACM awards, ten AMA awards, seven Dove awards, and a star on the Hollywood Walk of Fame. After achieving much success in country music, Travis turned to acting and acted in various television movies and films. After a long stint with the movies, he again turned back to music but made a career in gospel singing this time. He is known to have inadvertently opened the door for many young artists who wanted to return to the conventional sound of country music. American People
Lyricists & Songwriters
American Men
North Carolina Musicians
Male Singers
Childhood & Early Life
Randy Travis was born in Marshville, North Carolina to Bobbie Tucker and Harold Traywick. His father was a horse breeder, turkey farmer, substitute school teacher and a construction business owner, and mother was a textile factory worker.
Travis’ musical talent was supported by his father who was a fan of singers like Hank Williams, George Jones, etc. and at the age of 8, he began playing guitar and singing in the church.
His brother, Ricky, was also into singing and by the time Travis turned 10, he and his brother started to pursue their musical aspiration as ‘Traywick Brothers’ by performing at local clubs and in local talent shows.
Travis had a bit of an aggressive childhood - he fought with his father a lot and also dropped out of school. He was arrested as juvenile delinquent on several occasions, for offenses like theft and burglary.
In 1975, Travis finally won a local talent contest at a nightclub in North Carolina. The owner of the club, Elizabeth Hatcher, hired him as a cook and gave him regular opportunities to sing at the club. 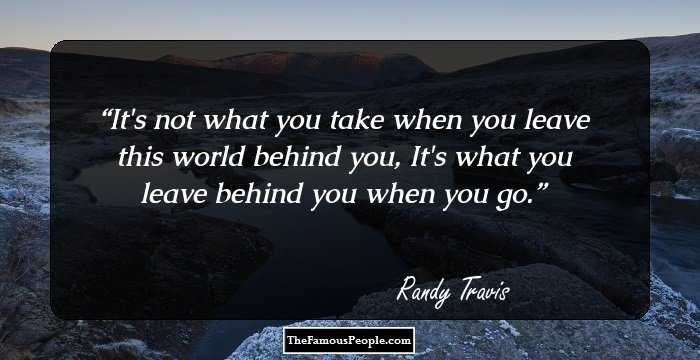 The Sexiest Men Of 2020, Ranked
Career
Hatcher became Travis’ manager and they both started to concentrate on his musical career. In 1978, he released his first album, ‘Randy Traywick’, with Paula Records. The album did not do very well commercially.
Travis and Hatcher moved to Tennessee and struggled for many years by doing menial jobs before Travis was signed by Warner Bros. Records in 1985. His first single ‘On The Other Hand’ unfortunately bombed on the charts.
Despite the failure of his first single with the Warner Bros. Records, they released his second single, ‘1982’ in 1986 and this time the track earned the Top 10 position on the country music charts.
After the success of ‘1982’, ‘On The Other Hand’ was re-released by the recording company, in the expectation of getting a better response this time and the track did very well on the charts. It elevated to No.1 position.
This led to the release of Travis’ first album, ‘Storms of Life’ and both the tracks—‘1982’ and ‘On The Other Hand’ were included in it. The album peaked at No.1 on the country music charts.
Many awards and honors were handed over to Travis for his exceptional success in country music and in the same year, he was made the member of the prestigious Grand Ole Opry.
In the following years two of his albums released under Wraner Bros. Records—‘Always & Forever (1988)’ and ‘Old 8x10 (1989)’. Both the albums did very well and fetched Travis Grammy Awards in Best Male Country Vocal Performance category.
In the 1990s, Travis decided to concentrate on his acting career and did role in television movies and movies like: ‘Dead Man’s Revenge (1994)’, ‘Steel Chariots (1997)’, ‘The Rainmaker (1997)’, ‘T.N.T (1998)’, ‘The Million Dollar Kid (1999)’, etc.
Towards the late 1990s and early 2000s, he decided to shift from mainstream music to gospel music and released albums like: ‘A Man Ain’t Made of Stone (1999)’, ‘Inspirational Journey (2000)’, ‘Rise and Shine (2002)’, ‘Worship & Faith (2003), etc.
Major Works
Beginning his career as a country singer, he won many accolades including Grammy Awards and was ranked 13 on CMT’s 40 Greatest Men of Country Music, later he turned to acting and gospel singing.
Awards & Achievements
Travis has won many awards like: 6 Grammys (one of them for Best Country Collaboration with Vocals, ‘I Told You So’ with Carrie Underwood), 7 Gospel Music Association Dove Awards, 6 Country Music Association Awards, 9 American Music Awards, etc.
Personal Life & Legacy
Travis married his long-time manager and girlfriend Elizabeth Hatcher in 1991 in Maui but their marriage ended in divorce in 2010, which ended their business association as well.
He was admitted to hospital in Dallas for viral cadiomyopathy after a viral upper respiratory infection in 2013; his condition was reported critical at the time. He suffered a stroke while in hospital and went through a brain surgery.
Trivia
He was arrested in 2012 after he was found in a parked car outside a church in Texas with an open bottle of wine and smelling of alcohol. He was found guilty at the court and received two years probation, a $2,000 fine and a 180-day suspended jail sentence.

Grammy Awards
Recommended Lists:
Musicians #470
Singers #176
You May Like

See the events in life of Randy Travis in Chronological Order