Rajon Rondo is an American professional basketball player who led the Boston Celtics to the NBA championship in 2008. He began his professional career with the Boston Celtics, playing as the team’s third-string point guard. Though initially he was criticized by his coach for his stubbornness, he eventually proved his worth and performed well enough to make the NBA All-Rookie Second Team. He became very popular and much sought-after following the Celtics’ win in the 2008 NBA championship. Now counted among the star players of his team, he continued displaying his on-field brilliance over the following years to make the Celtics one of the most formidable teams in NBA. Rondo’s interest in sports stems from his childhood. Initially he was more interested in football and baseball, eventually shifting his focus to basketball while he was studying in the Eastern High School. Soon he proved himself to be a very talented basketball player and was named a 2004 McDonald's All-American. After joining the University of Kentucky, he led his college team to several victories and set a Kentucky record for most steals in single-season. He eventually embarked on a professional basketball career with the Boston Celtics following his graduation. In 2014, he was traded to the Dallas Mavericks where he continues to give the game his best. American People
American Men
Tall Celebrities
Tall Male Celebrities
Male Sportspersons
Childhood & Early Life
Rajon Rondo was born on 22 February 1986, in Louisville, Kentucky to Amber Rondo and William Sr. He has three siblings. His father left the family when Rajon was just seven years old, leaving his mother to fend for herself and the children. His mother, a very determined woman, toiled hard to raise the children single-handedly.
He was a skinny child though he developed an interest in playing a variety of sports like football, baseball, and basketball.
He went to the Eastern High School for three years and during this time he became serious about basketball. He proved to be a great asset to his school’s team and earned a spot on the All-State honors and was named the 7th Region Player of the Year.
He then transferred to Virginia's Oak Hill Academy for his senior year where he broke Jeff McInnis's single-season school record of 303 assists, while averaging a double-double.
After completing his high school education he enrolled at the University of Kentucky. There he, along with team mates Joe Crawford and Randolph Morris, played a major role in the college team’s several victories. He finished his freshman year at Kentucky averaging 8.1 points, 2.9 rebounds, 3.5 assists and 2.6 steals.
Rondo was also named to the 2005 USA Men's Under-21 World Championship Team, and helped the team win a gold medal at the Global Games held in Texas in late July. 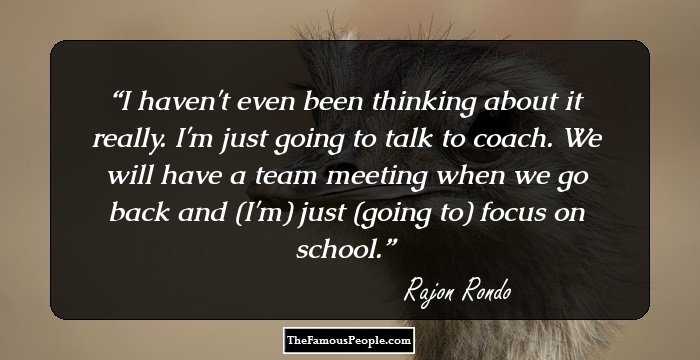 The Best Black Actresses Of All Time
Career
Rajon Rondo was drafted by the Phoenix Suns in the 2006 NBA draft and traded to the Boston Celtics. He was the first point guard to be chosen in the draft.
He started out playing a supporting role during the initial phase of his career. In his rookie season he played in only 25 matches and finally made his NBA regular season debut on November 1, 2006, in a home loss against the New Orleans Hornets and finished the season with an average of 6.4 points per game (ppg) and 3.8 assists per game (apg).
He made his playoff debut on 20 April 2008 against the Atlanta Hawks and finished the game with 15 points, 9 assists and 2 steals. The same year, he gave strong performances in the NBA championship finals in which the Celtics faced the Los Angeles Lakers. In Game 6, he posted a playoffs career-high 6 steals as the Celtics defeated the Lakers 4–2.
During the 2008–09 NBA season, Rajon Rando recorded his first career triple-double along with a career-high in assists (16 points, 13 rebounds and 17 assists), while playing against the Indiana Pacers.
The 2009–10 season was a memorable one for him as he became the first Celtic to lead the league in steals after he achieved career high averages in points (13.7), assists (9.8) and steals (2.3). The same year, he signed a five-year extension with the Celtics, worth a guaranteed $55 million.
After injuries interfered with his game in the 2010–11 season, he returned with a vengeance the following season to score 18 points, 17 rebounds, and 20 assists against the Knicks in March 2012. He scored a career high of 44 points, 10 assists, and 8 rebounds in a playoff game in the Game 2 of the Eastern Conference Finals in this season.
His successful streak continued during the 2012–13 season and he recorded 37 games with 10+ assists. In spite of an injury that forced him to miss several games, he still led the NBA in assists in the season.
He was traded along with Dwight Powell, to the Dallas Mavericks in exchange for Jae Crowder, Jameer Nelson, and Brandan Wright in December 2014, and made his debut for the Mavericks against the San Antonio Spurs. 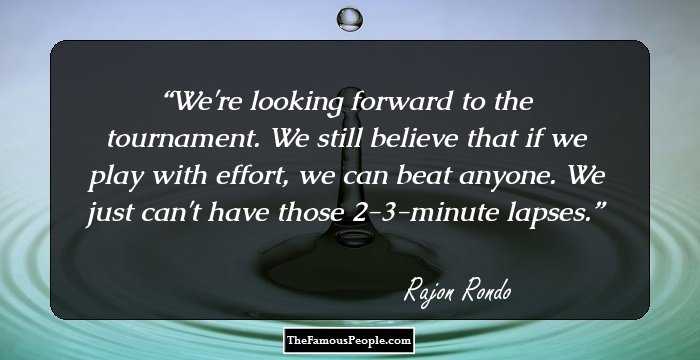 Quotes: Believe
Awards & Achievements
Rajon Rondo was named to the NBA All-Star team for four consecutive years (2010–2013).
In 2012, he was named to the All-NBA Team, an annual National Basketball Association (NBA) honor bestowed on the best players in the league following every NBA season.
Personal Life & Legacy
He maintains close relations with his mother and siblings, and is married to Ashley Bachelor whom he met while attending college at the University of Kentucky. The couple has two children. 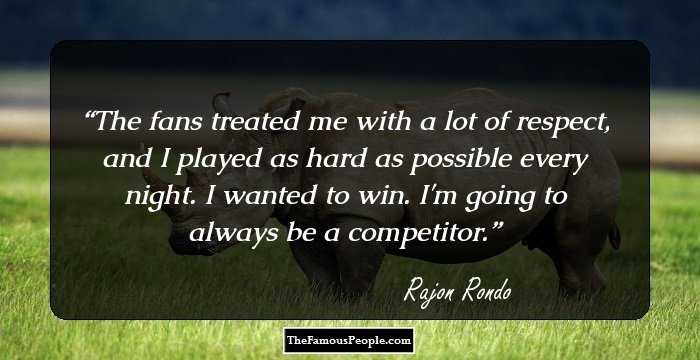 Trivia
He launched the Rajon Rondo Foundation in 2011 to help children from under-privileged backgrounds. He also runs an annual summer camp for youth basketball players.

Quotes By Rajon Rondo | Quote Of The Day | Top 100 Quotes

See the events in life of Rajon Rondo in Chronological Order