Princess Margaret, Countess of Snowdon was the second daughter of King George VI and the younger sister of Queen Elizabeth II. Born as Her Royal Highness Princess Margaret of York in her maternal grandfather’s home in Scotland, she became Her Royal Highness The Princess Margaret when her father succeeded the throne after abdication of his brother, King Edward VIII. Educated at home under her mother and Scottish governess, she performed her first official duty at the age of seventeen, when she launched the ocean liner ‘Edinburg Castle’. Very soon, she began to involve herself with charities, eventually serving more than fifty such organizations as patron or president. She also made many official overseas visits, representing the crown on numerous important occasions. Although she was one of the most controversial members of the royal family, she was much admired by the public for her social glamour as well as for her dedication to the crown. Elizabeth Bowes...
DID WE MISS SOMEONE?
CLICK HERE AND TELL US
WE'LL MAKE SURE
THEY'RE HERE A.S.A.P
Quick Facts

British Celebrities
British Royal Family Members
Leo Women
Childhood & Early Life
Princess Margaret Rose was born on 21 August 1930 at Glamis Castle, Scotland and baptized on 30 October in the chapel of Buckingham Palace by the Archbishop of Canterbury. Her birth was verified by the then Home Secretary, J. R. Clynes.
At the time of her birth, she was the fourth in the line of succession. Her father, Albert Frederick Arthur George, the Duke of York, was the second son of King George V. Later, on the abdication of his brother, King Edward VIII, he succeeded the throne, becoming King George VI.
Her mother, Elizabeth Angela Marguerite Bowes-Lyon, was the daughter of 14th and 1st Earl of Strathmore and Kinghorne, Lord of Glamis. She wanted to name her younger daughter Margaret Ann; but later settled on Margaret Rose because King George V did not approve of ‘Ann’.
Born younger of his parents’ two children, Margaret had an elder sister named Elizabeth, who on their father’s death became the Queen of United Kingdom, Queen Elizabeth II. The two siblings were very fond of each other; but their characters were far apart.
In 1932, when Margaret, lovingly called Margot, was two years old, the family moved to the Royal Lodge in Windsor Great Park. They also had a town house located at 145, Piccadilly, where they spent considerable time.
Forward and intelligent for her age, Princess Margaret was a talkative and amusing child. Yet, there was a rumor that she was born deaf and mute. It was dispelled when in 1934 she made her first public appearance at the wedding of her uncle, Prince George, Duke of Kent.
In 1935, Margaret, began her education under a Scottish governess, Marion Crawford. Princess Elizabeth, who was four years her senior, also studied under the same governess. Together they studied language, literature, history and music. Her mother also supervised her education.
In 1936, her grandfather, King George V, passed away and her uncle, King Edward VIII, ascended the throne. But very soon, he decided to marry Wallis Warfield-Simpson, a twice divorced American lady, abdicating in favor of his younger brother, the Duke of York, who reluctantly agreed to become the king.
As Duke of York was coroneted as King George VI on 11 December 1936, the family moved to Buckingham Palace. While Princess Elizabeth became heir presumptive, Margaret was elevated to the second place in the line of succession to the British throne. She now became ‘Her Royal Highness The Princess Margaret’.
In 1937, as the two princesses continued their education under their governess, 1st Buckingham Palace Brownie Pack was formed to enable Princess Elizabeth to become a Girl Guide. Shortly, Princess Margaret also joined the pack, which consisted of twenty girls from royal household and palace employees.
As the Second World War erupted in September 1939 and children of well-to-do families were being evacuated to safety it was suggested that the two princesses should be sent to Canada. But their parents refused to send them to a safer zone while the country was facing the gravest crisis.
Elizabeth and Margaret spent the first few months of the Second World War at Birkhall in Scotland, returning to Sandringham House near Sandringham, Norfolk to spend the Christmas. Thereafter, they moved to Windsor Castle, a royal residence close to London, where they spent rest of the war years.
During the war, they spent most of the time away from their parents. In addition to their Scottish governess, Marion Crawford, the children now had a French governess, Vicomtesse de Bellaigue. Princess Elizabeth, more mature and responsible than Princess Margaret, took it upon herself to control her little sister.
Too young to take up any official duty, Margaret spent her time developing her skills in singing and piano. She also joined the Girl Guide, concurrently taking part in plays and pantomimes. In October 1940, they sent a cheering message on ‘Children Hour’ a program by ‘Uncle Mac’.
As the Second World War ended on 8 May, 1945, Princess Margaret appeared with her family in the balcony of the Buckingham Palace. Later the two princesses disappeared in the crowd, secretly enjoying the victory celebration.
On 15 April 1946, Princess Margaret was confirmed into the Church of England. Also from now, she began to appear in public more frequently and soon became famous as a glamorous young beauty.
On 1 February 1947, Princess Margaret and Princess Elizabeth accompanied their parents on a month long state tour of Southern Africa. During this trip, Princess Margaret was chaperoned by her father’s equerry Peter Townsend, who would play a big role in her life for the next five years.
On 20 November 1947, Princess Elizabeth got married to Prince Philip of Greece and Denmark and gave birth to Prince Charles in 1948 and Princess Anne in 1950. Their birth pushed Margaret down the line of succession. Nonetheless, she enjoyed social life, often being featured in the press at balls, parties, and nightclubs. Her official engagement also increased from this period. 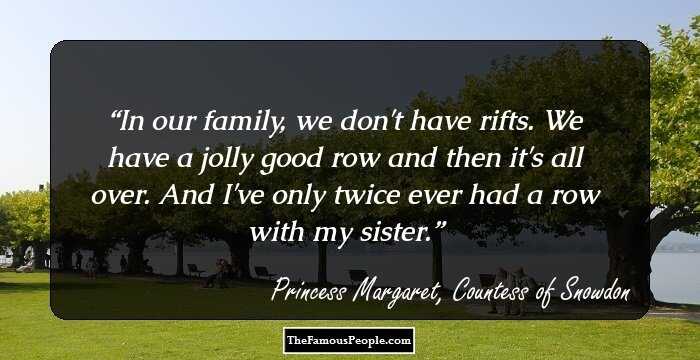 Continue Reading Below
Public Life
Princess Margaret began her public life with the launching of ‘Edinburg Castle’, a 747 feet (228 m) long ocean liner, on 16 October 1947 at Harland & Wolff's yard in Belfast. By eighteen, she had number of public engagements and had joined many charitable organizations as patron or president.
In September 1951, one month after she had celebrated her twenty-first birthday, her father, King George VI, underwent a surgery for lung cancer. During this period, Princess Margaret was appointed one of the Counsellors of State and was entrusted with carrying out her father’s official duties while he was incapacitated.
King George VI died on 6 February 1952, throwing Margaret into intense grief. While she found solace in her Christian beliefs, her friendship with Townsend also helped her to overcome her grief.
After the coronation of her elder sister as Queen Elizabeth II, Princess Margaret and her mother, ‘Queen Elizabeth, The Queen Mother’, moved to the Clarence House while Queen Elizabeth II moved to the Buckingham Palace. Steadfast in her loyalties to the Crown, Margaret continued to carry on her royal duties. 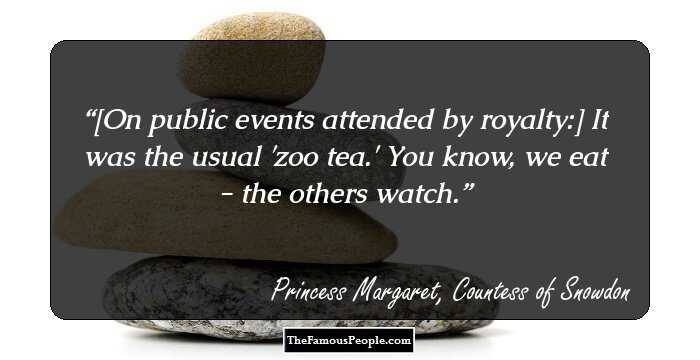 Official Visits
In 1953, Princess Margaret and Queen Mother went on an official tour to Rhodesia. However, her first solo official tour took place in 1955 when she visited the British colonies in the Caribbean on behalf of Queen Elizabeth II. Here, she earned great popularity with calypsos being dedicated to her.
In 1962, she represented the British Crown at the independence ceremonies in Jamaica. It was followed by an official visit to the United States of America in 1963 and to Denmark in 1964 and Japan in 1969. It is believed that she was bugged by the KGB while she was in Copenhagen.
In 1974, Princess Margaret once again traveled to the New World, visiting both United States and Canada. Next in 1975, she visited Australia. When the island republics of Dominica and Tuvalu attained independence in late 1978, she attended their independence ceremonies as the representative of the Crown.
In 1979, she visited Japan for the second time. In October, she went on a fund raising tour to the United States of America on behalf of Royal Opera House. It was followed by her visit to Philippines in 1980, Swaziland in 1981, and China in 1987.
Continue Reading Below
Charitable Works
Princess Margaret supported at least 80 charities as President or Patron. Most of them dealt with children and sick. Among the charities in which she functioned as the President were National Society, the Royal Scottish Society for the Prevention of Cruelty to Children and the Children's Aid Nationwide.
Being an admirer of the ballet, she became the first President of the Royal Ballet. She was also the President of Sadler’s Wells Foundation, the West Indies Olympic Association, the Girl Guides, Northern Ballet Theatre and the London Lighthouse.
She was the Grand President of the St John Ambulance Brigade and Colonel-in-Chief of Queen Alexandra's Royal Army Nursing Corps. 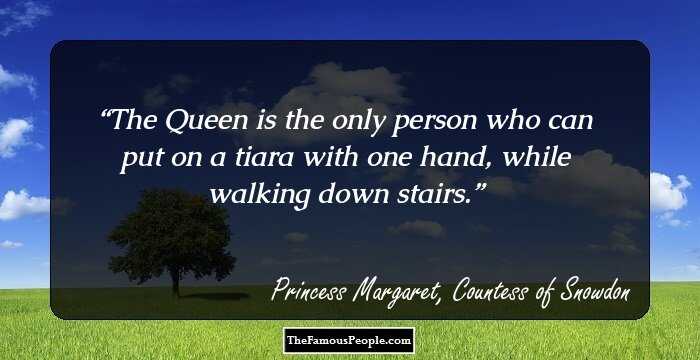 Military Service
Princess Margaret received number of honorary military appointments. She was the Colonel-in-Chief of the 15th/19th the King’s Royal Hussars, the Royal Highland Fusiliers and Queen Alexandra's Royal Army Nursing Corps. She took special interest in the activities of the first two organizations.
She was also the Colonel-in-Chief of a few foreign units including the Highland Fusiliers of Canada, the Princess Louise Fusiliers (of Canada), the Royal Newfoundland Regiment and the Bermuda Regiment.
She was also the Deputy Colonel-in-Chief of the Royal Anglian Regiment and the Honorary Air Commodore of Royal Air Force Coningsby. She had special relationship with HMS Illustrious and HMS Norfolk.
She was also the Commandant-in-Chief of the Ambulance and Nursing Cadets of the St. John Ambulance Brigade. Later, she became the Grand President of the St John Ambulance Brigade.
Awards & Achievements
Princess Margaret was made the Dame Grand Cross of the Royal Victorian Order on 1 June 1953 and Dame Grand Cross of the Order of St John of Jerusalem on 20 June 1956. On 21 August 1990, she received Royal Victorian Chain.
She also received many foreign honors including Knight Grand Cross of the Order of the Netherlands Lion (1948), Member of the Order of the Brilliant Star of Zanzibar, First Class (1956). Grand Cross of the Order of the Crown (Belgium, 1960), Grand Cordon of the Order of the Precious Crown (Japan, 1971).
In 1957, she was made an Honorary Doctor of Music of London University. Also in the same year, she became the first President of the Royal Ballet.
Personal Life & Legacy
In 1953, Princess Margaret accepted marriage proposal from recently divorced Group Captain Peter Wooldridge Townsend. The marriage proposal aroused negative sentiment from all quarters and the British cabinet refused to approve it. Eventually in 1955, it was decided that Princess Margaret could marry Townsend provided she opted out of the line of succession.
On 31 October 1955, Princess Margaret issued a statement, in which she said that she had decided to opt out of the marriage. As reasons, she had sighted not only the teachings of the Church, but also her duty to the Commonwealth.
On 6 May, 1960, five years after her break up with Townsend, Princess Margaret married Antony Armstrong-Jones, a well-known photographer, at Westminster Abbey. In 1961, he was created Earl of Snowdon and Viscount Linley, of Nymans in the County of Sussex.
Although the marriage began to fail from an early stage, they remained married for sixteen years; having two children; David Armstrong-Jones, 2nd Earl of Snowdon, born in 1961 and Lady Sarah, born in 1964. The marriage ended in a divorce in 1978.
A heavy smoker and drinker, Princess Margaret underwent several major operations since 1980. In early 2001, she suffered two severe strokes, which left her paralytic on the left side. In February 2001, she had another stroke and died from it on 9 February 2002 at the age of 71.
Her mortal remains were cremated and ashes were placed in the tomb of her parents in the King George VI Memorial Chapel in St George's Chapel. Today, she has many roads named after her across the world. Two plants, Gladiolus "Princess Margaret Rose" and Hyacinthus orientalis "Princess Margaret", also bear her legacy.

See the events in life of Princess Margaret, Countess Of Snowdon in Chronological Order