(Best Known For His Roles in the Films: 'Dirty Dancing' and 'Ghost')

Patrick Wayne Swayze was one of the most versatile actors Hollywood has produced and the characters that he portrayed cemented his position in the film industry. His father was an engineer and his mother was a choreographer who owned a dancing school. Patrick developed an interest for dance and learnt dancing from his mother. Later, he joined other dancing institutions in New York to enhance his skills. He was also good at other activities like swimming, football, and gymnastics. In New York, his first dance performance as a professional was for the ‘Disney on Parade’ event. He then made a shift from dancing to acting and appeared in minor roles in television. Eventually, his potential for acting was recognized by people in the business and he got his break on the big screen. His first major role was in the film ‘The Outsiders’ and gradually, he became a known face in Hollywood. The film ‘Dirty Dancing’ can be regarded as a milestone film in his career as well as in Hollywood. He has always been passionate about dancing and in this film he played the role of a dancer. Patrick’s exceptional performance in the film earned him a ‘Golden Globe Award’ nomination. However, his career met with an abrupt stop when he was diagnosed with cancer. He died fighting cancer on September 14, 2009. Humanitarian Work: Associated with charitable program ‘Stand Up to Cancer’.

American Celebrities
Singers
Dancers
American Men
Texas Actors
Childhood & Early Life
He was born on 18 August 1952, in Houston, Texas, USA, to Jesse Wayne Swayze and Patsy Swayze. His father was a draftsman for chemical plant engineering and his mother ran a dancing school in Houston. He had four siblings, namely Don Swayze, Sean Kyle, Vickie Lynn, and Bambi.
He spent his early life in Oak Forest, Houston, and received education from ‘St. Rose of Lima Catholic School,’ ‘Oak Forest Elementary School,’ ‘Black Middle School,’ and ‘Waltrip High School.’ He was involved in many extra-curricular activities, such as swimming, gymnastics, football, and dancing.
He got trained in gymnastics at ‘San Jacinto College.’ In 1972, he traveled to New York and received dance training at institutes like ‘Harkness Ballet School’ and ‘Joffrey Ballet School.’ His first dance performance as a professional was for the ‘Disney on Parade’ event. 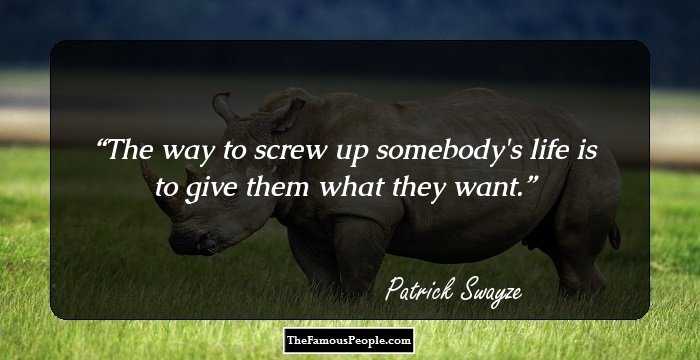 Quotes: Life
Continue Reading Below
Career
He made his Broadway debut with a musical titled ‘Grease.’ In 1979, he got his first break on the big screen with the movie ‘Skatetown, U.S.A.,’ which was a comedy film.
In 1981, he was featured in a television show named ‘MASH’ in an episode titled ‘Blood Brother.’ The same year, he also worked in the television drama film ‘Return of the Rebels.’
His role in the 1983 film ‘The Outsiders’ earned him recognition and the following year, he also appeared in the ‘Red Dawn.’ The same year, he worked in the movie ‘Grandview U.S.A.’
In 1985, he appeared in the TV miniseries ‘North and South’ and this became a milestone in his acting career. The following year, he starred in the drama film ‘Youngblood.’
The film which established him in the film industry was ‘Dirty Dancing’ where he portrayed a dance trainer named Johnny Castle. The movie met with unexpected success and became a hit.
He also sang a power ballad titled ‘She’s Like the Wind’ for the movie. The song is often sung by other singers. This song, which was supposed to be used in the film ‘Grandview, U.S.A.,’ was written by Swayze along with Stacy Widelitz.
He then got many film projects and during 1987-90, he worked in movies, such as ‘Steel Dawn,’ ‘Tiger Warsaw,’ ‘Next of Kin,’ ‘Road House,’ and ‘Ghost.’ His role in the film ‘Ghost’ was highly appreciated and can be regarded as his first major role as a lead. He also hosted ‘Saturday Night Live’ during this period.
The following year, he worked in the action crime movie ‘Point Break’ which earned him a nomination at ‘MTV Movie Award’ for ‘Most Desirable Man.’ He was also named the ‘Sexiest Man Alive’ by the ‘People’ magazine.
During 1992-95, he worked in movies, such as ‘City of Joy,’ ‘Father Hood,’ ‘Tall Tale: The Unbelievable Adventures of Pecos Bill,’ ‘Three Wishes,’ and ‘To Wong Foo, Thanks for Everything! Julie Newmar.’
Continue Reading Below
In 1998, he worked in movies like ‘Letters from a Killer’ and ‘Black Dog.’ While shooting for the film ‘Letters from a Killer,’ he met with an accident and was bedridden for a long time.
Both his legs were fractured and he even hurt his shoulder when he fell from a horse and smashed into a tree. The production of the movie was delayed and it was released the following year.
He gradually recovered from the injury and in the year 2000 resumed his acting career with the film ‘Forever Lulu.’ The following year, he worked in the movies ‘Donnie Darko’ and ‘Green Dragon.’
From 2002 to 2009, this gifted actor worked in various films and television series, such as ‘Waking Up in Reno,’ ‘One Last Dance,’ ‘11:14,’ ‘Dirty Dancing: Havana Nights,’ ‘George and the Dragon,’ ‘King Solomon's Mines,’ ‘Keeping Mum,’ ‘Icon,’ ‘The Fox and the Hound 2,’ ‘Jump!,’ ‘Christmas in Wonderland,’ ‘Powder Blue,’ and ‘The Beast.’
He also worked in West End theatre where he acted in the musical ‘Guys and Dolls.’ He even voiced a character named Cash in the animated movie ‘The Fox and the Hound 2.’ 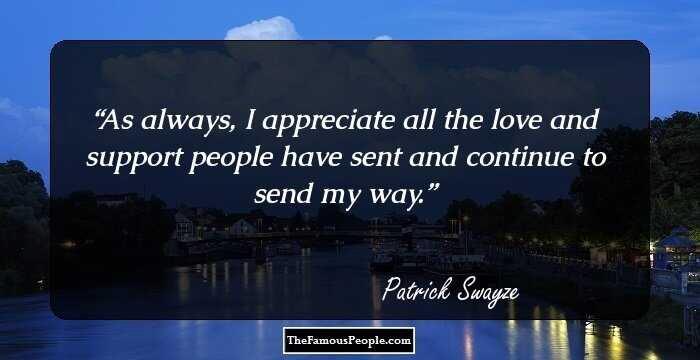 Major Works
This versatile actor’s role in the movie ‘The Outsiders’ made him popular in Hollywood. However, the film which cemented his place in the film industry is ‘Dirty Dancing’ where he played the role of a dance trainer. As he was always passionate about dancing, he did justice to the role. The film garnered huge profits and sold one million video copies till 2009, which is a record in itself.
Awards & Achievements
This actor received many award nominations, including nominations at the ‘Golden Globe Award.’ However, he did not win any of the awards. 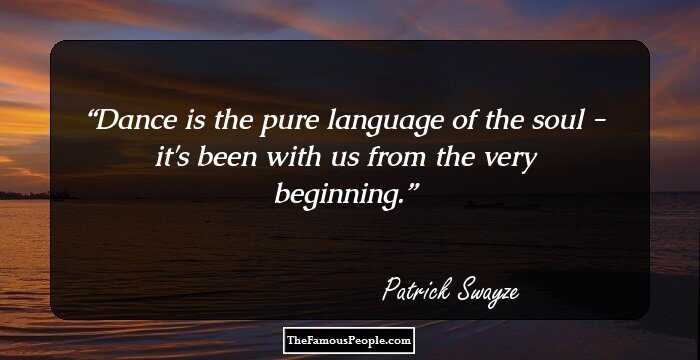 Quotes: Soul
Personal Life & Legacy
On 12th June 1975, he married actor-director Lisa Niemi, after a courtship of about five years. Patrick met Lisa when she started taking dance lessons from Patrick’s mother Patsy Swayze.
His father’s death impacted him, so much so that he sought solace in alcohol and his sister’s death worsened his addiction. Later, he underwent rehabilitation to overcome his addiction. He got acquainted with Buddhism and even took ‘EST Training,’ practiced Scientology and transcendental meditation.
In 2008, he was diagnosed with stage IV pancreatic cancer. In spite of suffering from the disease, this talented actor continued his acting career.
After a long battle with this dreadful disease, he breathed his last on 14th September 2009, and his ashes were scattered over his estate in New Mexico.
Trivia
In 1989, he received a ‘Razzie Award for Worst Actor’ nomination for his films ‘Next of Kin’ and ‘Road House.’
Swayze’s name has been commonly used by hip-hop artists and rappers in their songs.

Quotes By Patrick Swayze | Quote Of The Day | Top 100 Quotes

See the events in life of Patrick Swayze in Chronological Order