(Known for Her Hit Single “Because the Night”)

If you are of the belief that rock and roll is only about music and no poetry, and poetry only about verses and no music, you are in for a surprise, for the Godmother of Punk, has redefined poetry and rock and roll and explicitly determined the inter-connection between the two. Surprised maybe handful who have not listened to Patti Smith while the rest specifically know what we are talking about! Patti Smith is one of the pioneers of punk rock music who changed the way female rock stars were looked upon by the world. A trailblazer in her own right, she, with her soulful yet powerful lyrical talent, made the poetic connotations sound sweeter than the notes of guitar in the sphere of rock and roll. It was through her impeccable style and strong talented approach that she transformed the thought processes and dreams of an entire generation. An influential singer-songwriter and musician, she shot to fame with her 1975 released debut album ‘Horses’. Her single, ‘Because the Night’ brought her international acclaim and recognition. Over the years, she has contributed heavily in rock music for which she has been the proud recipient of numerous honors. To know more about her life and profile, read on. American People
Musicians
Rock Singers
Lyricists & Songwriters
American Men
Childhood & Early Life
Patti Smith was the eldest of the four children born to Beverly Smith and Grant Smith. While her mother was a waitress, her father was employed as a machinist at Honeywell plant.
In 1950, the family moved to Philadelphia and six years later to Woodbury, New Jersey. As a child, she was shy and introvert. She mostly had a tomboyish attitude and indulged in playing with her male friends, until her teacher taught her the importance and aspects of femininity.
She completed her preliminary education from Deptford Township High School in 1964. Thereafter, she took up a job at a toy factory. Her experience at the factory was a gruelling one which later formed the theme of her first single, ‘Piss Factory’.
In the fall of 1964, she enrolled at the Glassboro State Teachers College with an intention to become a high school art teacher. However, poor academic performance and her continuous insistence to break away from the traditional curriculum to focus on the experimental artists led to her dropping out of the same.
With an aim to become an artist, she moved to New York in 1967. To earn a livelihood for herself, she took up a job at a Manhattan bookstore. It was there that she befriended Robert Mapplethorpe, a photographer.
In 1969, she moved to Paris but for only sometime. Therein, she indulged in performance art. Returning to New York, she took up a couple of assignments. While she provided spoken word soundtrack for a film, ‘Robert Having His Nipple Pierced’, she was cast opposite Wayne County in Jackie Curtis play, ‘Femme Fatale’. 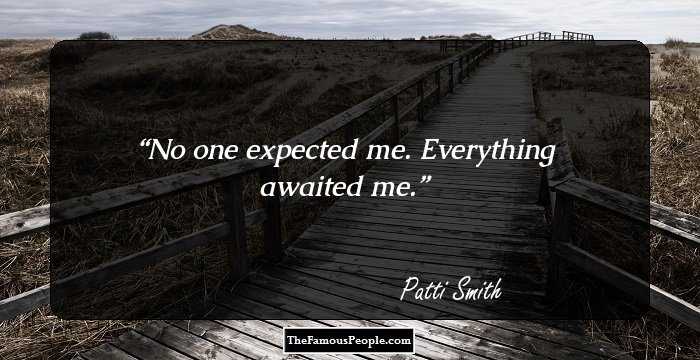 Quotes: Me
Continue Reading Below
Career
The start of the decade of 1970s witnessed her being involved in painting, writing and performing. Performance poetry was her favourite medium of artistic expression. She gave her first public reading, on February 10, 1971 at St. Mark's Church in the Bowery.
The success of her performance at St. Marks made her an the newest talent too look out for in the New York arts circle. Polishing her reputation further, she co-authored and co-starred with Sam Shepard in his semiautobiographical play ‘Cowboy Mouth’.
Concentrating on her writing career, she published her first book of poetry in 1972. Though the book, ‘Seventh Heaven’ did not get the sales number soaring, it did earn flattering remarks from audience. Additionally, she wrote two more works, including ‘Early Morning Dream’ and ‘Witt’, both of which was praised.
She wrote lyrics for several songs by the band, Blue Oyster Cult, such as ‘Debbie Denise’, ‘Baby Ice Dog’, ‘Career of Evil’, ‘Fire of Unknown Origin’, ‘The Revenge of Vera Gemini’ and ‘Shooting Shark’.
She even contributed for rock journalism for various magazines some worth mentioning include Creem and Rolling Stone. Moving on from writing, she tried her luck at rock and roll for her lyric poetry.
Later, in 1974, she formed her own band, The Patti Smith Group and came up with her first ever recorded single, title ‘Piss Factory’. Popularly tagged as the first purest punk song, the track garnered a cult following and was immensely appreciated by critics and the people.
The following year, she signed a record deal with Arista Records. Same year, she came up with her debut album, ‘Horses’. The album included the famous singles, ‘Gloria’ and ‘Land of Thousand Dances’. The energetic music and soulful lyrics won the hearts of millions of fans and critics across the world.
In 1976, the Patti Smith Group released their second album, ‘Radio Ethiopia’. The album was well received and paved way for a third in the offering titled, ‘Easter’. It included the super hit track, ‘Because the Night’. Her fourth album, ‘Wave’, released in 1979, did not repeat the success story of its predecessors.
Post release of the album ‘Wave’, she took a 17 year hiatus from professional and public life and immersed herself to taking care of her family and rearing children. In between, she came up with the album, ‘Dream of Life’ in 1988 along with her husband. The magic failed to work and the album was a dud commercially.
Continue Reading Below
The death of her husband in 1994, followed by the deaths of her brother Todd and keyboard player Richard Sohl, propelled her to revive her music career. Further encouraged by old friends, she set out to take a tour with Bob Dylan in December 1995.
In the subsequent year, she reconciled with her former colleagues to come up with the album, ‘Gone Again’ which featured the singles, ‘About a Boy’, ‘Summer Cannibals’ and ‘Wicked Messenger’. Additionally, she collaborated with Stipe for the song ‘E-Bow the Letter’.
Post the success of ‘Gone Again’, she came up with her next album in 1997, titled, “Peace and Noise’. Three years later, the album ‘Gung Ho’ was released. Much like her albums before the hiatus, these were also critically and commercially hit. Songs ‘1959’ and ‘Glitter in the Eyes’ from the albums received Grammy nomination for her.
In 2004, she came up with her subsequent album, ‘Trampin’ under Columbia Records, which was to become the sister label for Arista Records. The album was a tribute to her mother who had passed away in 2002 and thus included songs about motherhood.
In 2005, she along with members of the Patti Smith Group, re-united for a live performance of their album, ‘Horses’. A recorded version of the same was made available to public the following year.
In 2006, many of her artistic works were exhibited at Trolley Gallery, London in the exhibition, ‘Sur les Traces’, the proceedings of which she donated to raise awareness for publication of Double Blind. In 2008, her artwork Land 250 was exhibited in Paris by the Fondation Cartier pour l'Art Contemporain.
In 2009, she played an open-air concert in Florence’s Piazza Santa Croce. Following year, she released the book, ‘Just Kids’, which describes Manhattan of the 1970s and highlights her relationship with Robert Mapplethorpe. The superb reception of the book led it to win the National Book Award in the category of Nonfiction.
In 2010, she made a cameo appearance in the film, ‘Socialisme’, which was screened at the 2010 Cannes Festival. Following year, she made her television acting debut on the TV series ‘Law & Order: Criminal Intent’ for the episode, ‘Icarus’.
She released her latest album, ‘Banga’ in June 2012. The album was critically praised and marvelled at as it depicted her traditional style of mixing poetry with rock. Same year, she provided lead vocals for the title track of the album, ‘Helen Burns’
Continue Reading Below
Currently, she is working on a crime novel which is based in London and Gothenburg, Sweden. Her deep rooted love for detective stories since an early age led to her writing a book in the genre. 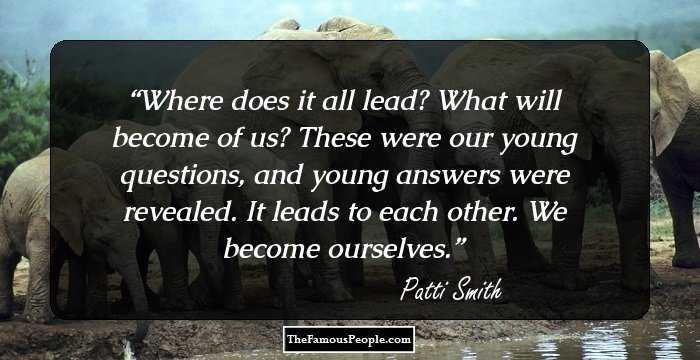 Quotes: Will, Young
Major Works
Her 1975 released debut album, ‘Horses’ under the band ‘The Patti Smith Group’ was a major critical and commercial success. The album was very well received for its energetic disposition, soulful lyrics and skilful wordplay. The songs, ‘Gloria’ and ‘Land of a Thousand Dances’ emerged as the top contenders. Critics claimed the album to be the purest punk rock album and a must-inclusion in the list of ‘best albums of all time’.
Awards & Achievements
She was conferred with the French decoration of Commander of the Ordre des Arts et des Lettres by the Ministry of Culture on February 10, 2005. Later in November, she received the Woman of Valor Award from ROCKRGRL Magazine.
In 2007, she was inducted into the Rock and Roll Hall of Fame.
She is the proud recipient of the Honorary Doctorate in Fine Arts from Pratt Institute on May 17, 2010. Same year, she won National Book Award for her memoirs, ‘Just Kids’. In 2011, she won the Polar Music Prize for her contribution to art.
In 2013, she was presented with the Katharine Hepburn Medal by Bryn Mawr College. Same year, she was greeted by Pope Francis in St Peter’s Square. 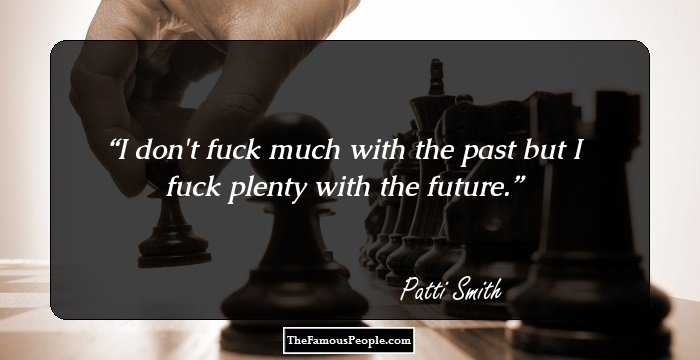 Quotes: Future, Past, I
Personal Life & Legacy
She developed an intense romantic liaison with Robert Mapplethorpe. The relationship was outlined with extreme poverty and Mapplethorpe’s struggle with his own sexuality.
The relationship ended when Mapplethorpe realised he was a homosexual. Though their romantic association ended, they remained friends until the latter’s death in 1989. Also they were artistic partners all through.
From the beginning of the decade of 1970s, she was romantically involved with Blues Oyster Cult keyboardist, Allen Lanier. She separated from him in 1979.
She had an affair with Fred ‘Sonic’ Smith, former guitar player for Detroit rock band MC5 with whom she married. The couple was blessed with a son, Jackson. Smith passed away in 1994.
Trivia
This American singer-songwriter of ‘Because the Night’ fame married Fred ‘Sonic’ Scott. It was rumoured that she married him only because she would not have to change her surname later.
Recommended Lists:
Musicians #154
Singers #274
Lyricists & Songwriters #61

Quotes By Patti Smith | Quote Of The Day | Top 100 Quotes

See the events in life of Patti Smith in Chronological Order