Norman Cousins was an American political journalist and author. This biography profiles his childhood, life, career, works, achievements and timeline. DID WE MISS SOMEONE?
CLICK HERE AND TELL US
WE'LL MAKE SURE
THEY'RE HERE A.S.A.P
Popularity Index
Media Personalities #526
Norman Cousins
Quick Facts

Shaun King
Norman Cousins was one of the initiators of public television in the United States. In his lifetime, he carried out ambassadorial missions abroad as a private envoy for Presidents Kennedy, Eisenhower and Johnson. In his long and illustrious life, he also served as the former chairman of the Pulitzer Prize jury for ‘Literature’. He is the recipient of numerous awards - the United Nations Peace Medal and the City of Hiroshima Award to name a few. Some of his major works include, ‘The Good Inheritance: The Democratic Chance’, ‘Anatomy of an Illness’, ‘The Celebration of Life’, ‘The Improbably Triumvirate’, ‘In Place of Frolly’, ‘Talks with Nehru’ and ‘Human Options’. Apart from being an author, he was also a political journalist, professor and an advocate of world peace. Apart from his world peace efforts, he holds numerous honorary degrees in the fields of literature, science and law from diverse institutions.
Recommended Lists:

Newspaper Columnists
American Men
Columbia University
Male Writers
Childhood & Early Life
Norman Cousins was born on June 24, 1915 in West Hoboken, New Jersey. Despite the fact that he was really athletic when he was a young boy, doctors had misdiagnosed him with tuberculosis and placed him in a sanitarium when he was 11 years old.
He studied at Theodore Roosevelt High School and graduated from the institute in 1933. During his time in school, he was the editor of the high school paper, ‘The Square Deal’.
He then studied at the Teachers College, Columbia University, where he completed his bachelor’s degree. Right after he graduated from college, he joined ‘New York Evening Post’, in 1934. 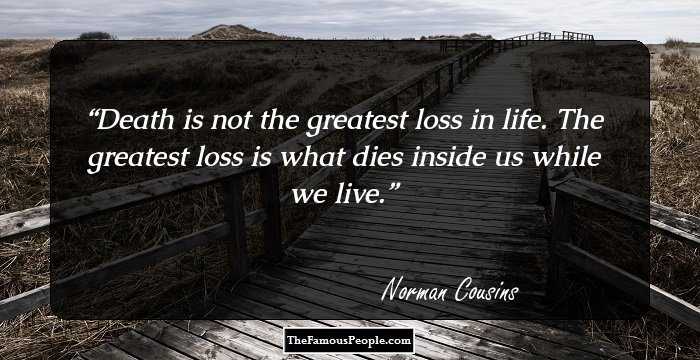 Quotes: Life, Death
Continue Reading Below
You May Like

Cancer Writers
American Writers
Male Journalists
American Journalists
Career
In 1935, he was hired by ‘Current History’ as a book critic. He was later made the managing editor. Five years later, he joined the office of ‘Saturday Review of Literature’.
In 1942, he was named editor-in-chief, a position he would hold for a long time. Under his direction, the circulation of the publication increased manifold. During his time with the organization, he worked assiduously to sponsor liberal causes, such as nuclear demilitarization and world peace.
He wrote an extensive editorial on the bombings at Hiroshima titled ‘The Modern Man is Obsolete’ in 1945. The response the next day following the publication of his article was immense. The story was circulated in the country and was also reprinted in a number of newspapers.
In 1949, he wrote ‘Writing for love or money: thirty-five essays’ which is a collection of some of his writings.
In 1953, he authored the non-fiction book, ‘Who Speaks for Man’. During the 1950s, he also became tremendously active in arranging for medical treatment for around 25 Hibakusha in the United States.
From 1960 to 1967, he penned, ‘Dr. Schweitzer of Lambarene’, ‘In place of folly’, ‘Great American Essays’ and ‘Present Tense; an American editor’s Odyssey’. During the 1960s, he also commenced the ‘American-Soviet Dartmouth’ for peace processes.
He worked for the board of trustees for Science Service, which is currently known as ‘Society for Science & the Public’ from 1972 to 1975.
In 1979, he wrote one of his most important works, ‘Anatomy of an Illness as perceived by the patient: reflections on healing’. The same was adapted for film. Two years later, he wrote an autobiographical best-seller titled, ‘Human Options’.
Through the q980s, he published a number of other works including ‘The Physician in Literature’, ‘The Words of Albert Schweitzer’, ‘The human adventure: a camera chronicle’, ‘The Pathology of Power’ and one of his last works in his lifetime, ‘Head first: the biology of hope and the healing power of the human spirit’.
Continue Reading Below 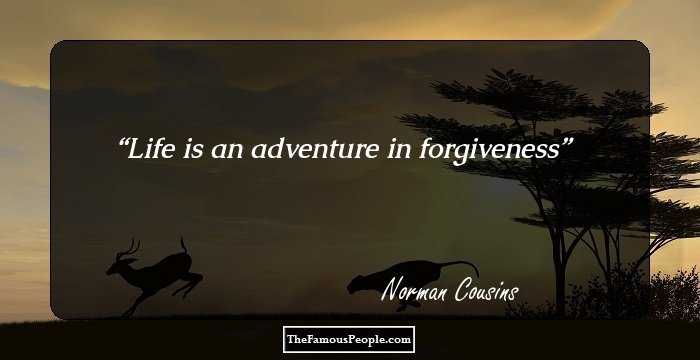 Male Media Personalities
American Media Personalities
American Newspaper Columnists
Cancer Men
Major Works
‘Anatomy of an Illness: As Perceived by the Patient’ was written in 1979 and is considered one of his best works. The book became a best-seller as soon as it was released and it became a trailblazing classic on battling lethal diseases through comicality and ‘patient participation care’. This is largely regarded as one of his major works.
Awards & Achievements
Cousins was presented the Eleanor Roosevelt Peace Award, in 1963.
He received the Family Man of the Year Award in 1968.
He was honored with a ‘Peace Medal’ from the United Nations, in 1971
He received the Helmerich Award in 1985.
In 1990, he received the Niwano Peace Prize.
He received the Albert Schweitzer Prize, in 1990. 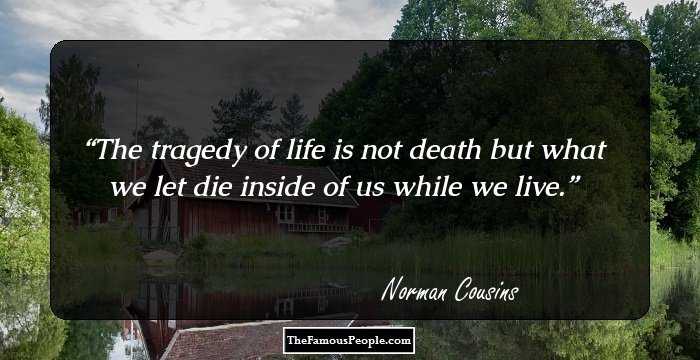 Quotes: Life, Death
Personal Life & Legacy
He suffered from heart disease and arthritis during most part of his life, which he included in his autobiography, ‘Anatomy of an Illness’.
He had four daughters; Andrea, Amy, Candis and Sarah Kit Shapiro with his wife, Ellen.
He passed away of heart failure on November 30, 1990 in Los Angeles, California.
Trivia
During his lifetime, this political journalist and author’s life was portrayed by Ed Asner in the television movie, ‘Anatomy of an Illness’.
You May Like

See the events in life of Norman Cousins in Chronological Order