Nicole Houston Reed is an American actress best known for her portrayal of the vampire Rosalie Hale in the popular movie series, ‘The Twilight Saga’ franchise. She is also a singer, songwriter, screenwriter and model. She began her acting career with a role in the drama film ‘Thirteen’. The film was about a high school student who enters a world of sex, crime, and substance abuse. Her performance won her an ‘Independent Spirit Award’ for Best Debut Performance. After appearing in films such as ‘Lords of Dogtown’ and ‘American Gun’, she came to international popularity with her portrayal of Rosalie Hale in the romantic fantasy film ‘Twilight’ which was a huge success commercially. Her more recent films include the independent horror flick ‘Jack Goes Home’. She is also active on television and played a recurring role in the supernatural drama series ‘Sleepy Hollow’, which has been reviewed favorably by critics. The multi-talented lady is a singer-songwriter as well and has released a few songs and music videos. She volunteers at animal shelters in her free time and is an animal rights advocate. 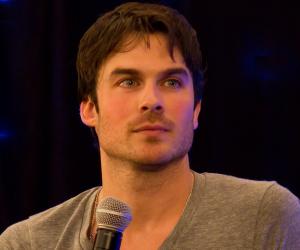 American People
American Women
California Actresses
Taurus Actresses
American Actresses
Childhood & Early Life
Nikki Reed was born on May 17, 1988 in West Los Angeles, California, in the US. Her father is Seth Reed, a production designer, and her mother is Cheryl Houston, a beautician. Her parents divorced when she was only two. She was raised by her mother. Though she grew up without religion, today she identifies as a Jew. She has a younger half-brother named Joey Reed.
Her early life was very complicated. From the age of fourteen, she started living on her own. Though she dropped out of school, she later earned a high school diploma through homeschooling.
Continue Reading Below
You May Like

Who Is The Greatest Female Warrior In History?
Career
Nikki Reed began her film career with a role in the 2003 independent drama film ‘Thirteen’. She was also a co-writer, and the script was loosely based on her own life. The film was about a junior high school student who gets involved in a life of sex, substance abuse, and crime. The film was met with favorable reviews though it generated some controversy as well. It was also commercially successful.
She next played a supporting role in the 2005 film ‘Man of God’. The story revolved around a middle-aged rabbi, whose faith is shaken after some incidents. The same year, she also appeared in the biographical film ‘Lords of Dogtown’. The movie was a commercial failure, and received mixed reviews. However, it has been listed on the Empire list of ‘The 500 Greatest Movies of All Time’. She also played a role in the film ‘American Gun’.
She appeared in the films ‘Mini’s First Time’ (2006) and ‘Cherry Crush’ (2007). She came to international popularity after her supporting role in the 2008 romantic fantasy film ‘Twilight’. Directed by Catherine Hardwicke, the film was based on Stephanie Meyer’s novel of the same name. The film did quite well commercially and won a few awards as well. It was met with mixed reviews. The same year, she also appeared in the film ‘Familiar Strangers’.
In 2009, she reprised her role in ‘The Twilight Saga: New Moon’. The film was a huge success commercially, earning $700 million on a $50 million budget. It also won several awards and nominations. She next played a main role in the drama comedy film ‘Last Days of Summer’.
In the next few years, she appeared in three other films of the ‘The Twilight Saga’ franchise, which included ‘The Twilight Saga: Eclipse’ (2010), ‘The Twilight Saga: Breaking Dawn- Part 1’ (2011) and ‘The Twilight Saga: Breaking Dawn- Part 2’.
In 2013, she played a role in the psychological thriller film ‘Enter the Dangerous Mind’. It was met with negative reviews. She also appeared in the films ‘Empire’ and ‘Pawn’ the same year. Other films she appeared in over the next few years include ‘In Your Eyes’ (2014), ‘About Scout’ (2015) and ‘A Sunday Horse’ (2016). From 2015 to 2016, she also appeared in some episodes of the TV series ‘Sleepy Hollow’.
Major Works
‘Thirteen,’ a drama film directed by Catharine Hardwicke, was the first film in Nikki Reed’s career. Reed was also the co-writer. The film was loosely based on her life as a student. It starred actors, such as Brady Corbet, Deborah Kara Unger, Kip Pardue and Vanessa Anne Hudgens. The film earned $10 million a $2 million budget.
Her most notable work so far is undoubtedly the role of Rosalie Hale in ‘The Twilight Saga’ film series, which consisted of five romantic fantasy films. It was based on the popular novels by Stephanie Meyer. The series was a huge success commercially on an international level. However, critical response was mostly mixed to negative.
Personal Life
Nikki Reed got married to singer Paul McDonald in 2011. They separated in 2014 and eventually got divorced in 2015.
She later started dating actor Ian Somerhalder and they eventually got married in April 2015. She became pregnant with their first child in late 2016 and gave birth to a daughter named Bodhi Soleil in July 2017.
Reed is a vegetarian and is also known for her animal rights activism. She was honored with the ASPCA Compassion Award for her animal welfare works.

See the events in life of Nikki Reed in Chronological Order