Natalie Wood was a famous Russian-American film and television actress who appeared in 56 movies in her career. She started out young and began acting at the age of four. At the age of eight, she acted in one of the most successful films of her life, ‘Miracle on 34th Street.’ She also found fame in the industry as a teen actress with movies like ‘Rebel Without a Cause,’ ‘West Side Story,’ etc. Wood became a successful Hollywood actress, receiving three ‘Academy Award’ nominations before reaching the age of 25. Her versatility as an actress helped her to establish herself in the world of cinema and she went on to win many awards in her acting career. These awards include ‘Star of Tomorrow Award’ at the ‘National Association of Theatre Owners,’ three ‘Golden Globe Awards,’ ‘Mar del Plata Film Festival Award,’ etc. Wood had a troubled personal life which affected her professional life from time to time. She was married to her childhood crush and actor Robert Wagner. She met her death at the age of 43 when she drowned while yachting with Wagner and co-star Christopher Walken.

Jennifer Coolidge
20th July In History
DID WE MISS SOMEONE?
CLICK HERE AND TELL US
WE'LL MAKE SURE
THEY'RE HERE A.S.A.P
Quick Facts

American Celebrities
American Women
California Actresses
Cancer Actresses
American Actresses
Childhood & Early Life
Natalie Wood was born Natalia Nikolaevna Zakharenko on July 20, 1938, in San Francisco, California, USA, to Russian immigrants Nikolai Stepanovich Zakharenko and Maria Stepanovna. Her father was a day laborer and carpenter, and her mother was an aspiring actress.
Wood was encouraged to pursue performing arts from young age; she was enrolled into ballet classes by her mother. At the age of four, she got an opportunity to act in a movie titled ‘Happy Land’ in 1943.
In 1947, Wood signed up with ‘20th Century Fox’ studio for her first big role in the movie ‘Miracle on 34th Street.’ The film made her one of the top child artists of Hollywood.
Wood continued her education as per the law in California which required child actors to spend at least three hours a day learning. A teacher was hired to teach her on the sets. 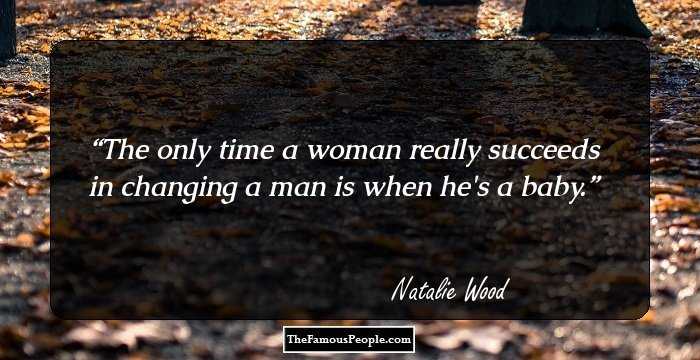 Quotes: Time
Continue Reading Below
Career
Wood’s first major role came at the age of 16 when she acted in ‘Rebel Without a Cause’ in 1955. She starred alongside James Dean and was nominated for an ‘Academy Award’ for playing a rebellious teenager.
The following year, she acted in ‘The Searchers’ along with John Wayne. In the movie, she played a small but important role. She also graduated from ‘Van Nuys High School’ the same year.
In spite of going through a rough patch because of various flops, her adult acting career took off with ‘Splendor in the Grass’ in 1961. She was cast in the movie by director Elia Kazan.
The same year, she starred in another love story titled ‘West Side Story,’ an adaptation of Shakespeare’s classic ‘Romeo and Juliet.’ In the movie, Wood’s character falls in love with a boy from an economically backward class.
Wood’s other movies from the ‘60s include ‘Gypsy’ (1962), ‘Love with the Proper Stranger’ (1963), ‘The Great Race’ (1965), ‘Inside Daisy Clover’ (1965), ‘This Property Is Condemned’ (1966), ‘Bob & Carol & Ted & Alice’ (1969), etc.
In 1970, pregnant with her first child, Wood took a break as she wanted to pay more attention to her role as a mother.
Later on, she made television appearances in ‘The Affair’ (1973), ‘Cat on a Hot Tin Roof’ (1976), and ‘Switch’ (1975-1978).
In the late-70s, Wood started working more frequently and did movies like ‘Meteor’ (1979)—starring opposite Sean Connery, ‘The Last Married Couple in America’ (1980)—a sex comedy, and ‘The Cracker Factory’ (1979). She also appeared in the TV series ‘From Here to Eternity’ (1979). 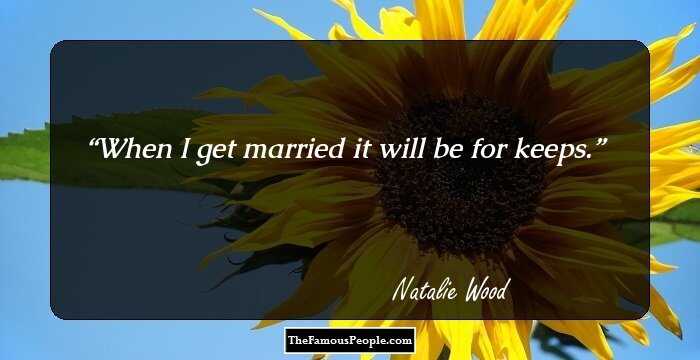 Continue Reading Below
Major Works
Wood started out as a child artist and then starred in teenage movies, which eventually led to her establishment as an adult artist. It was during the ‘60s that her acting career was at its glorious peak.
With movies like ‘West Side Story’ (1961), ‘Gypsy’ (1962), ‘Splendor in the Grass’ (1961), and ‘Love with the Proper Stranger’ (1963), she established herself in the industry as a bold and versatile actress.
Awards & Achievements
In 1946, she won the ‘Most Talented Young Actress’ award for the film ‘Tomorrow Is Forever.’
In 1957, she won the ‘Golden Globe Award’ under the ‘New Star of the Year – Actress’ category for the film 'Rebel Without a Cause.'
In 1964, she won the ‘Mar del Plata Film Festival Award’ under the ‘Best Actress’ category for the film 'Love with the Proper Stranger.' 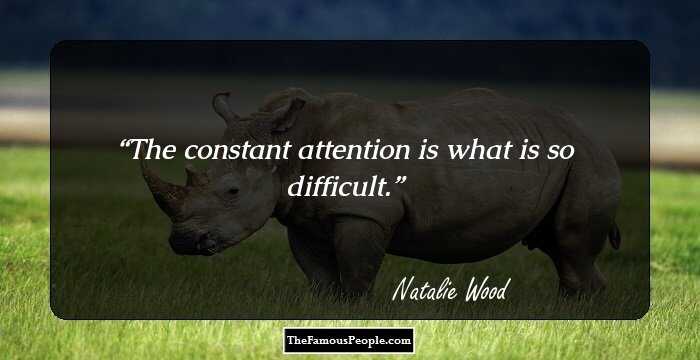 Personal Life & Legacy
Wood married actor Robert Wagner in 1957. She had a huge crush on Wagner since her childhood, and finally expressed her feelings when she was 18. The marriage ended in divorce in 1962.
In 1969, she married British producer Richard Gregson after dating him for two and a half years. The couple had a daughter named Natasha Gregson. They divorced in 1972.
Wood reconciled with her first husband Robert Wagner and remarried him in 1972. Two years later, their daughter Courtney Wagner was born. They remained married until Wood’s death.
Wood died in a drowning accident in 1981 when she was on a weekend boat trip to Santa Catalina Island with Wagner, actor Christopher Walken, and the boat’s captain Dennis Davern. Her mortal remains were buried in ‘Westwood Village Memorial Park Cemetery.’
Trivia
Wood’s autopsy report revealed that she had bruises on her body as well as an abrasion on her left cheek, and that her blood alcohol level was 0.14%. There were traces of two types of medication in her bloodstream: a motion-sickness pill and a painkiller, which increases the effects of alcohol.
In 2011, the captain of the boat Dennis Davern told ‘NBC News’ that according to him Wood’s husband was responsible for her death. The case was re-opened and Los Angeles County Chief Medical Examiner Dr. Lakshmanan Sathyavagiswaran revised Wood's death certificate and changed the cause of her death from ‘accidental drowning’ to ‘drowning and other undetermined factors.’
She allegedly had a relationship with director Nicholas Ray. At the time of their alleged relationship, she was 16 and the director was 43.
A TV film titled ‘The Mystery of Natalie Wood,’ directed by Peter Bogdanovich and starring Justine Waddell and Michael Weatherly, released in 2004.
At the time of her death, Wood was filming a science fiction movie titled ‘Brainstorm.’
In February 2018, Wood’s ex-husband Wagner denied any involvement in her death when the police investigated him.

Quotes By Natalie Wood | Quote Of The Day | Top 100 Quotes

See the events in life of Natalie Wood in Chronological Order