Nas is a popular American rapper and entrepreneur. Regarded as one of the greatest hip-hop artists, he has released eight consecutive platinum and multi-platinum albums, selling over 25 million records worldwide. Like his debut album ‘Illmatic,’ almost all of his albums are acclaimed “piece of perfection” and accepted as “classic works.” While ‘Billboard’ has named him among the ‘10 Best Rappers,’ ‘About.com’ has ranked him first in the list of top ‘50 Greatest MCs’ for two consecutive years. He has been acknowledged for his ability to create magic with lyrics and music. While MTV has honored him by ranking him fourth on its ‘Hottest MCs’ list, ‘The Source’ magazine has ranked him second on its list of ‘Top 50 Lyricists.’ Writer Adam Bradley has stated in his book ‘Book of Rhymes: The Poetics of Hip Hop’ that Nas is contemporary rap's greatest innovator. Nas is also a brilliant entrepreneur and has invested in several startups ranging from online retail to technology, and from job placement to restaurants. He has also invested in ‘Mass Appeal’ magazine and serves as its associate publisher. He has his own sneaker store and clothing line as well. Kendrick Lamar
Lyricists & Songwriters #90
Rappers #23
Musicians #225
DID WE MISS SOMEONE?
CLICK HERE AND TELL US
WE'LL MAKE SURE
THEY'RE HERE A.S.A.P
Quick Facts

American People
Black Singers
Black Rappers
Black Musicians
Lyricists & Songwriters
Childhood & Early Life
Nas was born Nasir bin Olu Dara Jones on September 14, 1973, in Brooklyn, New York City, USA, to Olu Dara, a jazz musician, and Fannie Ann Jones, a Postal Service worker. His brother Jabari Fret is a member of the hip-hop group ‘Bravehearts.’
When Nas was a child, his family relocated to the Queensbridge Houses in Long Island City. He became interested in hip-hop after listening to records at his neighbor Willie "Ill Will" Graham’s place. In 1985, he dropped out of school following his parents’ divorce.
Nas, who has African roots, learnt about African culture through Five Percent Nation and Nuwaubian Nation. In his early years, he developed an interest in creating music and played the trumpet. He tried his hand at writing rhymes as well. 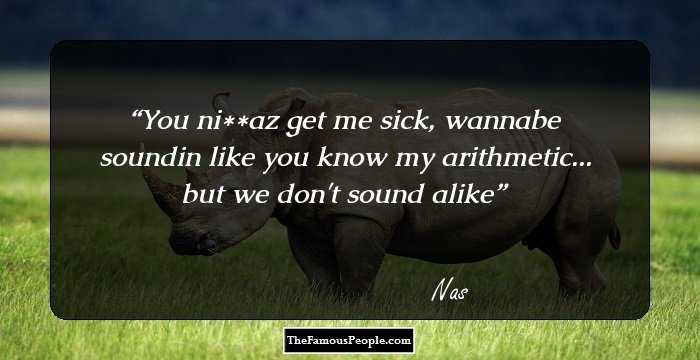 The Hottest Male Celebrities With The Best Abs
Musical Career
In 1991, Nas began his career as a featured artist at Main Source's ‘Live at the Barbeque.’ He released his debut album ‘Illmatic’ in 1994 which received universal acclaim from the hip-hop community as well as from critics. It was ranked as one of the greatest hip-hop albums of all time.
Nas' second album ‘It Was Written,’ launched in 1996, made him internationally famous. It peaked at No. 1 on the ‘Billboard 200,’ and was accredited double platinum in just two months.
In 1996, Nas, his manager Steve Stoute, producer Dr. Dre, and the production team ‘Trackmasters’ formed ‘The Firm,’ a hip-hop supergroup. The group’s debut album titled ‘The Album’ released in 1997. The album was a disappointment and generated negative criticism. The group was eventually disbanded in 1998.
His album ‘Stillmatic,’ which released on December 18, 2001, included socially conscious themes. His lyrics touched topics like ghetto life, US policies, and his feud with rapper Jay-Z. The album was a hit.
‘The Lost Tapes,’ a compilation of previously unreleased records, released on September 23, 2002. The album included tracks like ‘I Am...’ and ‘Stillmatic.’ Released with comparatively less promotion, it started off at No. 10 on the ‘Billboard 200,’ and sold 70,000 copies in the first week. It also received widespread acclaim from critics.
Nas’ sixth studio album ‘God's Son’ released on December 13, 2002. The tracks were inspired by his feud with Jay-Z, and the death of his mother in 2002. Consequently, the themes revolved around violence, emotional experiences, and religion. The album peaked at No.12 on the ‘US Billboard 200’ chart, and sold 156,000 copies in the first week. The album was certified platinum by RIAA.
On November 30, 2004, his seventh studio album ‘Street's Disciple’ was released. It was acclaimed by critics, and debuted at No. 5 on the ‘Billboard 200.’ It sold 232,000 copies in the first week. His eighth studio album ‘Hip Hop Is Dead’ released on December 19, 2006. The state of hip-hop music and his perspective of the music industry inspired the album’s title.
His untitled ninth studio album was released on July 15, 2008. Known for its provocative subject matter and political issues, the album generated positive reviews. Nas collaborated with Damian Marley and released the studio album ’Distant Relatives’ on May 18, 2010. The album debuted at No. 5 on the ‘US Billboard 200’ chart, and sold 57,000 copies in the first week.
‘Life Is Good,’ released on July 13, 2012, is his 11th studio album. It features themes on adulthood and Nas' life experiences. It received positive reviews, and debuted at No. 1 on ‘Billboard 200’ chart.
Continue Reading Below
In November 2016, he collaborated with Lin-Manuel Miranda, Dave East, and Aloe Blacc, and released a song titled ‘Wrote My Way Out.’ On April 12, 2017, he released the song ‘Angel Dust’ for the soundtrack of the TV series ‘The Getdown.’
Nas appeared in the award-winning 2017 documentary ‘The American Epic Sessions,’ directed by Bernard MacMahon.
Nas’s 12th studio album ‘Nasir’ was released on June 15, 2018 through ‘Mass Appeal Records’ and ‘Def Jam Recordings.’ 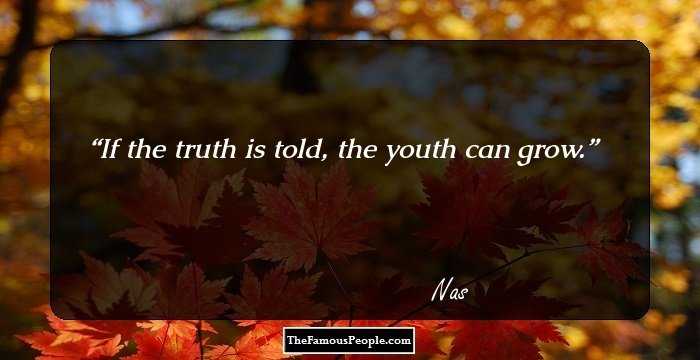 Business Ventures
Nas signed an agreement with sports goods company ‘Fila’ in 2008, serving as one of its spokespersons. In April 2013, he invested in ‘Mass Appeal’ magazine, and served as its associate publisher. In June, he announced that he would open his own sneaker store.
He struck a business partnership deal with ‘Rock The Bells’ music festival, and also with the online retail company ‘12Society.com.’
In September 2013, he invested in a technology startup company. The next year, he invested in the video startup ‘ViralGains.’ Nas is a business partner with ‘Hennessy,’ and works with their ‘Wild Rabbit’ campaign.
In May 2014, he signed a partnership deal with the job placement startup ‘Koru,’ and funded a scholarship for Koru's training program. He is also the co-owner of a Cloud-based service called ‘LANDR.’
In June 2015, he became a partner of a restaurant called ‘Sweet Chick,’ and plans to endorse the restaurant brand nationally. He also owns ‘HSTRY,’ a clothing line.
Major Works
His debut album ‘Illmatic’ and his second album ‘It Was Written’ are among his major works. Both the albums earned critical acclaim. His fifth studio album ‘Stillmatic’ peaked at No. 5 on the ‘US Billboard 200’ chart, and sold over 2,026,000 copies in the US.
His seventh studio album ‘Street's Disciple’ was his seventh consecutive platinum record in the US, and sold 1 million copies. The album ‘Hip Hop Is Dead’ debuted at No. 1 on the ‘US Billboard 200’ chart, and sold 764,000 copies. His ninth studio album debuted at No. 1 on the ‘US Billboard 200’ chart. It was certified gold by RIAA, and sold 500,000 copies in the US. 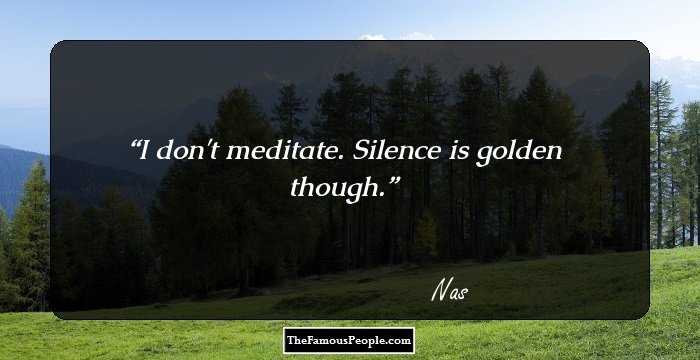 Quotes: I
Awards & Achievements
Nas has earned 12 ‘Grammy’ nominations. He won ‘Sports Emmy Award’ in 2011, and ‘BET Hip Hop Awards’ twice—in 2006 and 2012.
Personal Life & Legacy
On June 15, 1994, Nas’ ex-fiancée Carmen Bryan gave birth to their daughter, Destiny. Nas has also dated singer Mary Blige.
After a two-year relationship, he married R&B singer Kelis in 2005. Their son Knight was born on July 21, 2009. The couple divorced on May 21, 2010.
Nas is the first rapper to have a personal verified account on ‘Rap Genius’ where he talks about his lyrics. He also comments on the lyrics of other rappers.
In July 2013, ‘Harvard University’ honored him by starting the ‘Nasir Jones Hip-Hop Fellowship.’ Nas is a mentor at ‘P'Tones Records’ which creates opportunities for youth through no-cost music programs.

See the events in life of Nas in Chronological Order