Monica Lewinsky, a young ‘White House’ intern, made headlines for her affair with the then President Bill Clinton. One of the most controversial high-profile political sex scandals in the history of America, ‘The Lewinsky Scandal’ sent shock waves across the country. After a series of denials, Clinton finally admitted to having ‘an illicit physical relationship’ with Lewinsky. He was later charged with ‘perjury’ and was impeached. He was, however, acquitted following a 21-day-trial. Lewinsky became popular after the scandal - she appeared on many TV shows, commercials, and interviews, and even made an appearance on ‘Saturday Night Live.’ She also came up with her own line of handbags called ‘The Real Monica, Inc.’ The label sold its products in many countries across the world. After a period of time, she could not handle the media frenzy and found it immensely difficult to lead a private life in America. Hence, she moved to London, where she obtained a degree in psychology from the ‘London School of Economics.’ Ezra Miller
Miscellaneous #3307
Film & Theater Personalities #5259
Continue Reading Below
23rd July In History
DID WE MISS SOMEONE?
CLICK HERE AND TELL US
WE'LL MAKE SURE
THEY'RE HERE A.S.A.P
Quick Facts 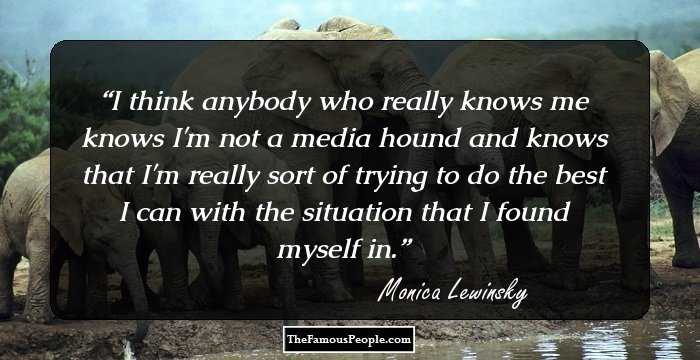 Quotes: Me, Think, Trying
Continue Reading Below
You May Like

The Best Black Actresses Of All Time
Career
On July 1995, she moved to Washington D.C., where she landed the role of an unpaid summer intern at the ‘White House Office.’ Here, she worked under the White House Chief of Staff, Leon Panetta.
On December 1995, she was offered a paid position at the ‘White House Office,’ and she gladly accepted the offer.
On April 1996, she was transferred to ‘The Pentagon,’ the headquarters of the ‘United States Department of Defence,’ located in Arlington County, Virginia.
In 1999, she gave an interview on ‘ABC’ network’s show ‘20/20.’ This program was hosted by Barbara Walters and was watched by 70 million Americans.
On May 8, 1999, she appeared on ‘Saturday Night Live.’ She appeared on a couple of sketches for the show that ridiculed her relationship with Bill Clinton.
On September 1999, she started her own line of handbags under the label ‘The Real Monica, Inc.,’ which was initially sold in New York, California, and London.
In the early-2000s, she started appearing in television commercials for ‘Jenny Craig,’ a weight management and nutrition company. Before signing a $1 million endorsement deal with ‘Jenny Craig,’ the company had asked her to lose more than 40 pounds in six months.
On February 2000, she appeared in an episode of ‘The Tom Green Show.’ In the show, she was portrayed as traveling to her hometown, along with the host of the show, in search of fabrics for her new business.
On April 2000, she terminated her contract with ‘Jenny Craig,’ when the company stopped airing the commercials featuring her.
Continue Reading Below
In late 2000, she worked as a correspondent for ‘Monica’s Postcards,’ a show that reported on culture and trends.
On March 2002, she appeared on a ‘HBO’ special titled ‘Monica in Black and White,’ which was part of the ‘America Undercover’ series, a collection of documentaries.
In 2003, she hosted a ‘Fox’ television network reality dating show titled ‘Mr Personality.’
She made a series of guest appearances on shows like ‘V Graham Norton’ in the UK, ‘High Chaparall’ in Sweden, ‘The View,’ and ‘Jimmy Kimmel Live!’
In 2006, she graduated from ‘London School of Economics’ with a master’s degree in social psychology. Her thesis was titled ‘In Search of the Impartial Juror: An Exploration of the Third-person effect and Pre-Trial Publicity.’
In 2014, she wrote an essay for ‘Vanity Fair’ titled ‘Shame or Survival’ concerning her relationship with Clinton. She was also part of the three-part ‘National Geographic’ documentary ‘The 90s: The Last Great Decade.’
She has since been spreading awareness about ‘Cyberbullying,’ speaking about it in ‘TED Talks’ and other social media platforms. She was also appointed as the ambassador and strategic advisor of anti-bullying organization ‘Bystander Revolution’ on June 2015.
She was interviewed by popular Israeli television presenter Yonit Levi at a conference in Jerusalem. She was also interviewed by John Oliver on his ‘HBO’ show about the problems of public shaming. 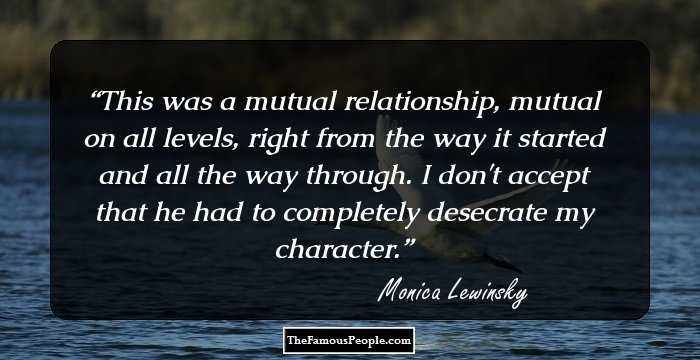 Quotes: Relationship, Character
Continue Reading Below
Personal Life
She claimed that between November 1995 and March 1997, she had nine sexual encounters with the then-President Bill Clinton at the Oval Office, the office of the President of the United States.
She told her co-worker Linda Tripp about her relationship with Bill Clinton, after which Tripp began discreetly recording the phone conversations between Lewinsky and Bill Clinton.
Linda Tripp submitted the phone tapes to Independent Counsel Kenneth Starr. Tripp further investigated the case and persuaded Lewinsky to safeguard the gifts that Clinton had given her.
On January 1998, the news about the illicit relationship came out in the media. On January 26, Clinton claimed that he did not have any sexual relations with her on a nationally televised White House News conference.
On August 17, 1998, he finally admitted that he had an ‘illicit physical relationship.’ This statement was broadcast on national television.
On February 1, 1999, her authorized biography, written by Andrew Morton and titled ‘Monica’s Story,’ was published by ‘St. Martin’s Press.’ She made $500,000 from the book.
In 2005, she moved to London as the media frenzy in the USA started affecting her personal and professional life.
She has been diagnosed with post-traumatic stress disorder due to the aftermath of her publicly disclosed affair.
Trivia
This infamous ‘White House’ intern and fashion designer stated that she survived the intense media attention that she received following the sex scandal.
Monica Lewinsky, who gained immense publicity after the sex scandal, was once asked to sign an autograph on a piece of paper that read ‘I'm kind of known for something that's not so great to be known for.’ 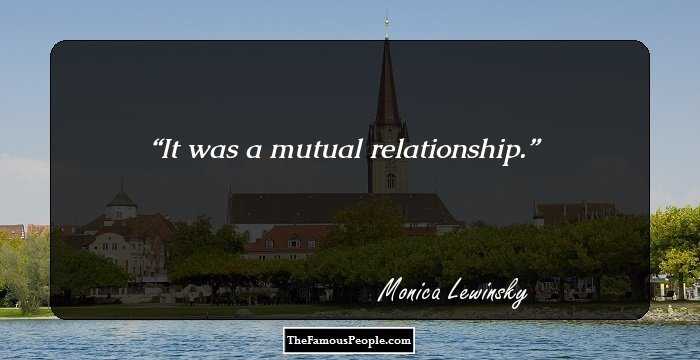 Quotes By Monica Lewinsky | Quote Of The Day | Top 100 Quotes

See the events in life of Monica Lewinsky in Chronological Order