Miracle Denise Watts is an American Instagram star, model, social media influencer, and entrepreneur. She gained fame after being mentioned by Drake on the OB O’Brien track ‘2 On Thotful’. A native of Texas, she was raised alongside a brother and a sister. Since she was a child, she has been interested in fashion, beauty, and photography. Prior to getting a shout out on ‘2 On Thotful’, she had made a name for herself as a professional twerker. After the release ‘2 On Thotful’, Watts made use of her rapidly growing popularity and set up her line of faux eyelashes, ‘The Miracle Lash’, and a line of faux hair, ‘The Miracle Tresses’. Watts has also garnered popularity as an Instagram model, by accumulating over two million followers on her handle. She is quite famous on Twitter as well and has over 150,000 followers on the micro-blogging site. She was previously signed with Facet Studios digital agency.
Continue Reading Below American People
Texas Instagram Stars
Female Instagram Models
Female Instagram Stars
American Instagram Stars
Rise to Fame
Miracle Watts started off as an exotic dancer in the popular Houston club Dreams. She, along with Lira Mercer and Maliah Michel, was their biggest attraction. This is how she met Drake, whose love for exotic dancers is well known. In fact, he has rapped about going to Dreams “with a suitcase”. In July 2017, it was reported by various news outlets that Drake celebrated the careers of Mercer, Michel, and Watts by organising a jersey retirement ceremony for the girls. He gave them customized basketball jerseys and there were also many other basketball-related elements at the party, such as a replica of the NBA's Larry O'Brien Trophy.
Recommended Lists:

American Instagram Models
American Female Instagram Stars
American Female Instagram Models
Aquarius Women
Since she became a social media influencer and an Instagram star, she has tried to maintain a level of consistency in her content. She began her journey towards social media fame as a professional twerker.
In May 2014, OB O’Brien released his track ‘2 On Thotful’, featuring Drake. In the track, Drake mentions Watts in his second verse, rapping, “You, bring the cash right here, man / Miracle, sit your ass right here, man!”
As a result of the sudden exposure, her popularity skyrocketed. She became a highly sought after Instagram model and was represented by Facet Studios for a considerable period. Watts came up with the idea of launching a line of faux eyelashes and a line of faux hair simultaneously. However, it took her about four months to set up the line of eyelashes whereas a full year was spent on developing the line of hair. In January 2015, Watts launched The Miracle Lash, after she had garnered one million followers on Instagram. Several months later, she launched The Miracle Tresses.
You May Like

Who Is The Greatest Female Warrior In History?
Continue Reading Below
Personal Life
Miracle Watts was born on January 30, 1993, in Houston, Texas. She has two siblings, a brother and a sister. Since she was a child, she has been interested in beauty, fashion, and photography. As an adult, she simply wanted to do something she loved. In an interview to ‘Galore’ magazine in October 2016, she stated that she had always been “girly” and the first time her mother did not get upset about her wearing makeup, she was “gone forever.”
From 2012 to 2013, Watts reportedly dated Hasan Suliman, the founder of Powered By Facet. In September 2015, she began dating recording artist August Alsina. Initially, Alsina denied that they were in a relationship, saying that they were just friends. However, he would often make appearances on her social media profiles, especially on her Snapchat.
One time, Watts even uploaded a photo of Alsina in his boxers. Another time, she posted a picture of Alsina with roses. They eventually broke up in May 2016.
Watts reportedly then dated Tori(sflyy_). She has also been linked to rappers Drake and Rich the Kid. It is widely speculated that she has undergone several plastic surgeries. 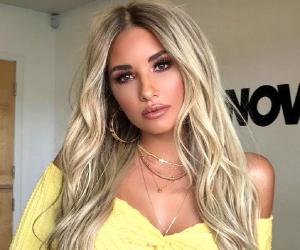