Mira Katherine Sorvino is a renowned American actress and producer. She came to limelight after winning the Oscar Award and Golden Globe for best supporting actress for her performance in Woody Allen's Mighty Aphrodite Both her parents Paul and Lorraine were actors by profession. She was an excellent student and graduated from Harvard University with special honors. She started her career in acting despite discouragement from her father. During her three decade long career in acting and production, she got nominated for several awards and won many. She got critical acclaim for her role in the movie ‘Mighty Aphrodite’. She did different types of roles in movies and television serials and each of these roles exhibited her versatility as an actress. Her mother influenced her to work for different social causes. She has been working for the Amnesty International for more than a decade. She has also worked as the U.N Goodwill Ambassador and is actively working for human rights. American People
American Women
New Yorkers Actresses
Harvard University
Libra Actresses
Childhood & Early Life
Mira Sorvino was born to Lorraine Ruth Davis and Paul Sorvino on 28th September 1967 in New York City. Her father Paul was a film director and actor while her mother was an actress who became a drama therapist later on.
She was brought up in New Jersey and attended Englewood High School there. During her school days she wrote and acted in plays. She did her graduation in East Asian Studies from Harvard University in 1989 and received ‘magna cum laude’.
She spent one year in China under student exchange program. She learnt Mandarin very well in order to accomplish her thesis on racial conflicts in China.
She has two siblings. Her younger brother is Michael Sorvino and her younger sister is Amanda Sorvino.
She performed plays in her locality with her childhood friend Hope Davis. 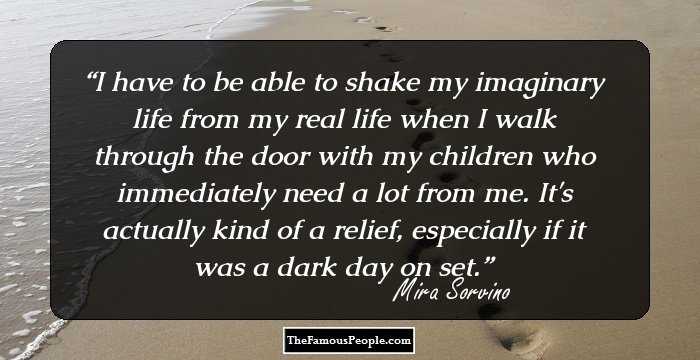 The Sexiest Men Of 2020, Ranked
Career
Sorvino’s acting career started when she was very young. She went to New York City to start her career in acting and did odd jobs and worked at ‘Tibeca’, a production company owned by renowned actor, Robert De Niro.
Once she got into acting, she acted in a variety of movies that ranged from comedy, thriller to action drama. She started working in Television in 1990 appearing in a small role in ‘Law & Order’.
Her debut movie was ‘Amongst Friends’ that was released in 1993. She was also the associate producer of this movie.
She got a remarkable role in the movie ‘Mighty Aphrodite’ (1995), which was directed by Woody Allen. In 1995, she played the role of Conchita Closson in ‘The Buccaneers’, a mini series of BBC that was adapted from Edith Wharton’s novel.
In 1996, she made remarkable impact with the movie ‘Norma Jean & Marilyn (1996) playing the role of beautiful blonde Marilyn Monroe co-starring with Ashley Judd.
She appeared in movies like ‘Mimic’ (1997), a thriller directed by Guillermo del Toro; ‘The Replacement Killers’ (1998), an action movie; and ‘Summer of Sam’ (1999) by John Leguizamo. In 1997, she appeared in the movie ‘Romy and Michele’s High School Reunion’ along with Lisa Kudrow.
Mira produced a comedy drama ‘Lisa Picard Is Famous’ (2000). She co-starred with Paul Rudd in ‘The Great Gatsby’, an adaptation of all time famous class by F. Scott Fitzgerald and played the role of Daisy Buchanan.
In 2000, she appeared in a supporting role in ‘The Grey Zone’, a drama directed by Tim Blake Nelson.
In 2012, Mira worked in ‘Trade of Innocents’ along with Dermot Mulroney. They played a couple who lost their child, fighting against human trafficking.
Continue Reading Below
Her ‘Falling Skies’ (2014), a science fiction thriller and ‘Psych’ (2014), the comedy crime show were very successful. 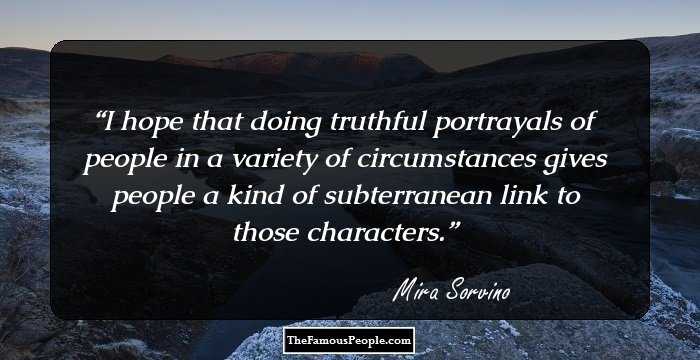 Quotes: Character
Major Works
Though Mira has exhibited her acting skills in various roles she played in movies and serials, her role of a lively prostitute in the movie ‘Mighty Aphrodite’ is considered as her most important one.
Apart from the Academy Award, she also won awards like ‘The Broadcast Film Critics Association’, National Board of Review’, ‘New York Film Critics Circle’ and ‘National Society of Film Critics’ for ‘Mighty Aphrodite’.
Awards & Achievements
She won the Academy Award in 1996 for ‘the Best Supporting Actress’ for her role in ‘The Mighty Aphrodite’ and in 1996, she was listed amongst the ’50 Most Beautiful People in the World’ by the People Magazine of USA.
Mira was one of the members of the jury in the Cannes Festival 1997.
A compound that is used by the sunburst diving beetle for defense is named after Mira Sorvino to honor her role in the movie ‘Mimic’, where she played the role of an entomologist.
She got nominated for ‘The Golden Globe Award’ for her roles in ‘Norma Jean and Marilyn’ and ‘Human Trafficking’ (2005). For ‘Norma Jean and Marilyn’, she also got nomination for ‘Emmy Awards’.
She was awarded the ‘best actress’ for her role in the movie ‘Like Dandelion Dust’ (2009) at the San Diego Film Festival. 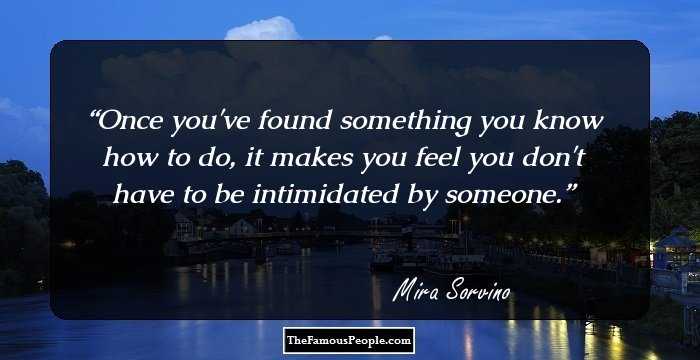 Personal Life & Legacy
Mira Sovrvino had romantic relationship with Quentin Tarantino from 1996 to 1998 but this relationship did not resulted in marriage.
She got married to actor Christopher Backus in 2004 and the couple has four children. They have two daughters - Mattea Angel born in 2004 and Lucia born in 2012. Her two sons are Johny Christopher King born in 2006 and Holden Paul Terry Backus born in 2009.
Trivia
Mira Sorvino can speak French and Mandarin Chinese fluently. She is gifted with a sweet voice. While she was doing her graduation in Harvard, she did the role of Dulcinea in the play ‘Man of La Mancha’ that was performed at Loeb Experimental Theatre.
Both Mira and her husband Christopher made guest appearance in a comedy serial in 1998 though both of them appeared in different episodes of this TV serial
She likes to watch the original version of ‘The Star Trek’ a popular television serial telecast in 1966.

Quotes By Mira Sorvino | Quote Of The Day | Top 100 Quotes

See the events in life of Mira Sorvino in Chronological Order