Max von Sydow was a Swedish-born French actor who has appeared in many European and American films of different languages during his seven decades long acting career. One of his most recognized roles was his portrayal of Lassefar Karlsson in 'Pelle the Conqueror', which earned him several awards and accolades, including his first 'Academy Award' nomination. He collaborated with renowned Swedish director, writer and producer, Ingmar Bergman, in 11 films, including 'The Seventh Seal', 'Wild Strawberries', 'The Virgin Spring', 'Through a Glass Darkly' and 'Hour of the Wolf'. Among his other notable films were 'The Greatest Story Ever Told', 'The Emigrants', 'The Exorcist', 'Three Days of the Condor', 'Flash Gordon', 'Never Say Never Again', 'Hannah and Her Sisters', 'Pelle the Conqueror', 'Minority Report', 'Robin Hood' and 'Star Wars: The Force Awakens'. He also made appearances in several TV shows and TV movies. Shortly before his death, he earned a 'Primetime Emmy' nomination for playing the role of ‘Three-Eyed Raven’ in HBO's blockbuster series 'Game of Thrones'.
Continue Reading Below French Celebrities
Swedish Celebrities
French Men
Swedish Men
Tall Celebrities
Tall Male Celebrities
Childhood & Early Life
Max von Sydow was born as Carl Adolf von Sydow on April 10, 1929, in Lund, Sweden. His father, Carl Wilhelm von Sydow, was an ethnologist who taught Irish, Scandinavian, and comparative folklore at the University of Lund, while his mother Maria Margareta 'Greta', the Baroness Rappe, was a schoolteacher.
He descends from a wealthy aristocratic family in Pomerania, a region which was formerly part of Prussia but is now located in Poland, which was under the Swedish rule for nearly two centuries. He is part German, and was brought up as a Lutheran, but later became an agnostic.
At the age of nine, von Sydow began studying at Lund Cathedral School, where he learned both German and English. He also founded an amateur theatrical company with his friends. In 1948, after completing his national service, he began taking acting lessons at the Royal Dramatic Theatre (Dramaten) in Stockholm, where Lars Ekborg, Margaretha Krook and Ingrid Thulin were among his peers. 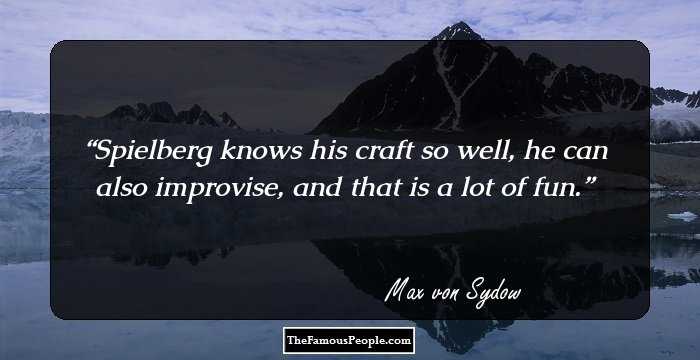 The Sexiest Men Of 2020, Ranked
Career
While studying at Dramaten in 1949, Max von Sydow made his professional film debut in the Alf Sjöberg-directed film 'Only a Mother'. In 1951, he appeared in 'Miss Julie', another Sjöberg film, which was based on August Strindberg's drama of the same name.
He received the Royal Foundation of Culture Award in 1954. A year later, he moved to Malmö and began working in stage productions at the Malmö Municipal Theatre under his mentor Ingmar Bergman. The director-actor pair earned international recognition for von Sydow’s chess game scene with the personification of Death in 'The Seventh Seal' (1957). They also collaborated on movie projects like 'Wild Strawberries' (1957) and 'The Virgin Spring' (1960).
Von Sydow continued to work on stage and in films in Scandinavia despite lucrative offers from Hollywood. He finally made the move to American cinema and appeared in the role of Jesus in George Stevens's all-star epic 'The Greatest Story Ever Told' (1965), which earned him greater recognition.
After the success of 'The Greatest Story Ever Told', he moved to Los Angeles and began appearing in American productions more regularly, while at the same time finding time to work in Swedish films. In the following years, he acted in John Huston's American crime-drama 'The Kremlin Letter' (1969) and Jan Troell's critically acclaimed Swedish film 'The Emigrants' (1971).
He received two Golden Globe nominations for his lead roles in the films 'Hawaii' (1966) and 'The Exorcist' (1973). He won the KCFCC Award for Best Supporting Actor for his portrayal of a professional Alsatian assassin in 'Three Days of the Condor' in 1975.
Von Sydow relocated to Rome in the mid-1970s to appear in a number of Italian films, and became friends with legendary Italian actor Marcello Mastroianni. He returned to the US in the late 1970s and appeared in films like 'Flash Gordon' (1980), 'Conan the Barbarian' (1982), 'Strange Brew' (1983), 'Dune' (1984), and 'Hannah and Her Sisters' (1986).
He was a jury member at the 35th Berlin International Film Festival in 1985. He received an Academy Award nomination for Best Actor for his portrayal of Lassefar Karlsson in the 1987 Danish epic film 'Pelle the Conqueror', which won the Academy Award for Best Foreign Language Film.
In 1988, von Sydow released his first and only directorial venture, the Danish-Swedish drama film 'Katinka', based on a novel by Herman Bang. The movie received two Guldbagge Awards in Best Director and Best Film categories. For his performance in the titular role in the 1990 Australian film 'Father', he was honored with the Australian Film Institute's Best Actor Award.
In 1992, he received the Tokyo International Film Festival’s Best Actor Award for his part in the film 'The Silent Touch'; and received a nomination at the Saturn Awards for his role in the movie 'Needful Things'. His portrayal of Nobel-winning novelist Knut Hamsun in Jan Troell's 1996 biopic 'Hamsun' is considered one of his finest roles, and it earned him his third Swedish Guldbagge Award.
Continue Reading Below
He played the role of an elderly lawyer in Scott Hicks's 1999 film 'Snow Falling on Cedars', based on David Guterson's novel of the same name, for which he earned critical acclaim. His top grossing film was the Steven Spielberg-directed neo-noir sci-fi thriller 'Minority Report' (2002), in which he co-starred with Tom Cruise.
Von Sydow, who appeared on several TV shows and telefilms throughout his career, played the mentor character, Eyvind, in the 2003 European TV adaptation of the 'Ring of the Nibelung' saga, which set a new ratings record. In the following year, he reprised his role in the US version of the show, 'Dark Kingdom: The Dragon King'.
He appeared alongside Jackie Chan in the commercially successful, buddy cop action comedy film, 'Rush Hour 3', in 2007. In the same year, he worked in the Julian Schnabel-directed biographical drama film 'The Diving Bell and the Butterfly', which won awards at the Cannes Film Festival, the Golden Globes, the BAFTA, and the César Awards.
In 2009, he portrayed Cardinal von Walburg in Showtime's historical fiction series 'The Tudors'. A year later, he appeared in the Martin Scorsese film 'Shutter Island' and the Ridley Scott film 'Robin Hood'.
He did voice acting and narration for the hugely popular video game 'The Elder Scrolls V: Skyrim' in 2011, and guest-starred in the animated sitcom 'The Simpsons' in 2014. In 2015, he played Lor San Tekka in J. J. Abrams's film 'Star Wars: The Force Awakens'. In 2016, he appeared as Three-Eyed Raven on the sixth season of the HBO series 'Game of Thrones'. 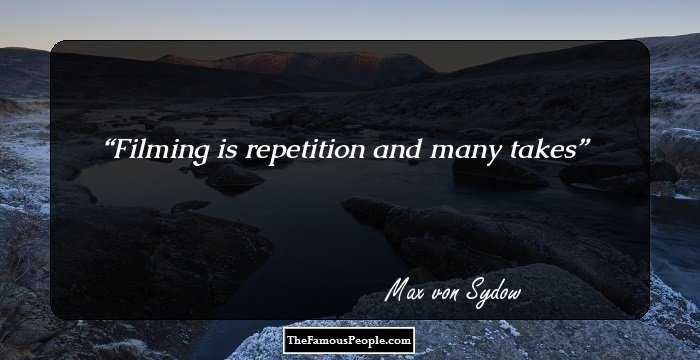 Major Works
Some of Max von Sydow's best films include 'The Seventh Seal', 'Through a Glass Darkly', 'The Greatest Story Ever Told', 'The Emigrants', 'The Exorcist', 'Never Say Never Again', 'Pelle the Conqueror' and 'Minority Report'.
Achievements
Max von Sydow was made a 'Commandeur des Arts et des Lettres' in 2005. In October 2012, he was named a 'Chevalier de la Légion d'honneur', the highest honor awarded by the French government. 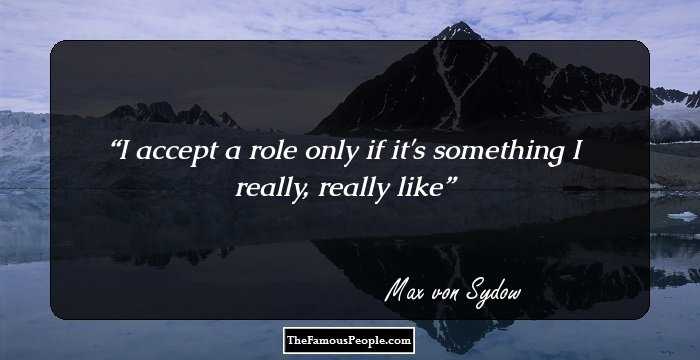 Family & Personal Life
Max von Sydow married actress Christina Inga Britta Olin on August 1, 1951. They had two sons named Claes and Henrik. Sydow divorced Britta on February 26, 1979.
He became involved with film producer Catherine Brelet for some time, before marrying her on April 30, 1997 in Provence, France.
He died on 8 March 2020, at the age of 90, at his home in Provence, France.
Trivia
Max von Sydow gave up his Swedish citizenship in 2002 to become a French citizen.
You May Like