Mary Tyler Moore was one of the most popular actresses in the history of television. She started out in commercials, and made her film debut in X-15. She became popular with her role in ‘The Dick Van Dyke Show’ in 1961. As Laura Petrie, she demonstrated her talent for domestic comedy, and won Emmys for her work on the series. She made a few movies, including ‘Thoroughly Modern Millie’ and ‘Change of Habit’ and then returned to television work in The Mary Tyler Moore Show. Audiences identified with her portrayal of Mary Richards, a single 30-something woman in the working world. The comedy show followed Mary's personal and professional life as she worked at a television news department. Moore and her second husband Grant Tinker created and produced the series through their company MTM Enterprises. She made several attempts to regain her popularity, but none of her new shows caught on with television audiences. She did, however, continue to have success in other acting endeavors and won a Tony Award for her performance of ‘Whose Life Is It Anyway?’ on Broadway. She also received an Academy Award nomination for ‘Ordinary People’ that same year. In addition to her acting, she also devoted much of her time to the American Diabetes Association.
Continue Reading Below American Celebrities
American Women
New Yorkers Actresses
American Actresses
Capricorn Actresses
Childhood & Early Life
Mary Tyler Moore was born on December 29, 1936 in Brooklyn, New York, to George Tyler Moore, a clerk, and Marjorie. She was the eldest of three siblings and their home was in Flushing, Queens.
She attended Saint Rose of Lima, a Catholic school in Brooklyn. When she was eight, her family moved to Los Angeles where she attended St. Ambrose School and the Immaculate Heart High School. 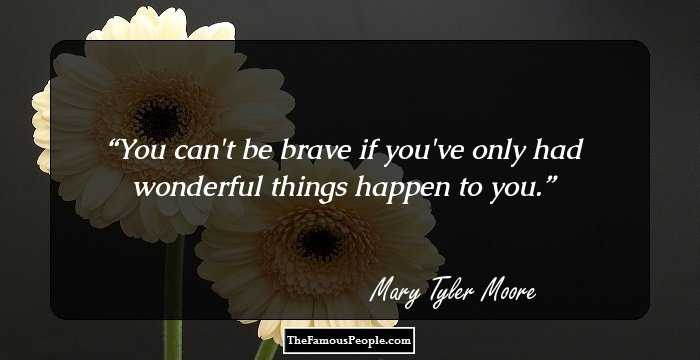 Who Is The Most Popular BTS Member?
Career
At seventeen, Moore wanted to be a dancer. She starred as Happy Hotpoint, a tiny elf dancing on Hotpoint appliances in TV commercials during the 1950s series Ozzie and Harriet, her first job.
In her first regular television role, she played a mysterious and glamorous telephone receptionist in the detective drama, ‘Richard Diamond, Private Detective’ that aired from 1957 to 1960.
In 1960, she guest-starred in two episodes of the William Bendix-Doug McClure NBC western series, ‘Overland Trail’ and also appeared in the first episode of NBC's sitcom, ‘The Tab Hunter Show’.
The year 1961 was a fruitful one for her as she got big parts in movies and television, including ‘Bourbon Street Beat’, ‘77 Sunset Strip’, ‘Surfside Six’, ‘Wanted: Dead or Alive’, ‘Steve Canyon’, ‘Hawaiian Eye’, ‘Thriller’ and ‘Lock-Up’.
She made her movie debut in the dramatic aviation film ‘X-15’, a fictionalized account of the X-15 research rocket plane program which also starred David McLean and Charles Bronson.
She played Miss Dorothy Brown in ‘Thoroughly Modern Millie’, a 1967 musical film starring Julie Andrews about a naive young woman’s adventures when she sets her sights on marrying her wealthy boss.
Moore and her husband Grant Tinker founded MTM Enterprises, Inc. in 1969 which produced ‘The Mary Tyler Moore Show’ and other television shows and films. The company included a record label, MTM Records.
In 1969, she starred opposite Elvis Presley in ‘Change of Habit’, a 1969 musical drama film about three Catholic nuns, and a doctor who falls in love with one of the nuns.
Two unsuccessful series followed- Mary, in 1978, featured David Letterman, Michael Keaton, Swoosie Kurtz and Dick Shawn and a one-off musical/variety special titled, Mary's Incredible Dream, which featured John Ritter.
Continue Reading Below
In the second half of the 1980s, she performed in a series titled, ‘Mary’, which suffered from poor reviews and internal strife within the production crew and another called ‘Annie McGuire’, which was short-lived.
Between 2001 and 2005, she guest starred on ‘The Ellen Show’, ‘That 70s Show’ and ‘Hot in Cleveland’ and in between reunited with cast mates for ‘The Dick Van Dyke Show Revisited’.
She has appeared in a number of television movies, including, ‘Like Mother, Like Son’, ‘Run a Crooked Mile’, ‘Heart Sounds’, ‘The Gin Game Mary’ and ‘Rhoda’, ‘Finnegan Begin Again’ and ‘Stolen Babies’. 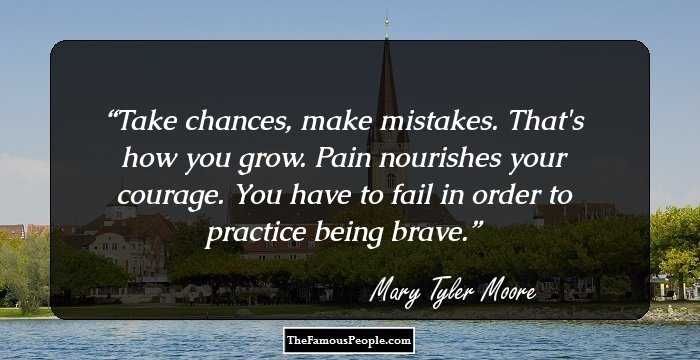 Quotes: You
Major Works
Between 1961 and 1966, in The Dick Van Dyke Show, Moore’s energetic comic performances as Van Dyke's character's wife, made her signature tight Capri pants and herself internationally famous.
‘The Mary Tyler Moore Show’, which aired from 1970 to 1977, is "one of the most acclaimed television programs ever produced." Moore presented a character different from other single TV women of the time.
In Robert Redford’s 1980 directorial debut ‘Ordinary People’, a critical and commercial successful film, she starred with Donald Sutherland, about a family’s disintegration, following the death of a son in a boating accident
Awards & Achievements
In 1981, she was nominated for the Academy Awards in the Best Actress in a Leading Role for the film Ordinary People. She won the Golden Globe Best Motion Picture Actress-Drama for the same.
She won Golden Globe Best TV Star- Female Award in 1965 for her role in The Dick Van Dyke Show and six years later won the award for Mary Tyler Moore.
Continue Reading Below
She won a Primetime Emmy Award for her supporting role in the miniseries - Stolen Babies. She won two Emmies each as leading Actress in The Dick Van Dyke Show and Mary Tyler Moore. 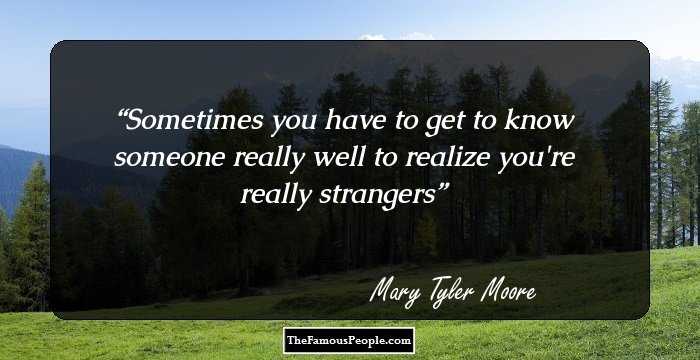 Quotes: You
Personal Life & Legacy
Mary Tyler Moore married thrice. Her first marriage was to Richard Carleton Meeker, at the age of 18, in 1955. She gave birth to a son, named Richard Jr. in 1956. Mary and Richard Carleton divorced in 1961.
She had to endure the tragedy of the death of her son, Richard who died at the age of 24, when accidentally shot himself while handling a sawed-off shotgun.
Her second marriage was to Grant Tinker, then a CBS executive, in 1962. The marriage lasted for 19 years and the divorced in 1981.
Her third marriage was to Robert Levine on November 23, 1983 and the marriage lasted till her death.
She died of cardiopulmonary arrest on January 25, 2017, at the age of 80.
She was the International Chairman of JDRF, the Juvenile Diabetes Research Foundation and used her profile to help raise funds and raise awareness of diabetes mellitus type 1, which she had.
In 2007, JDRF created the Forever Moore, a research initiative to support JDRF's Academic Research and Development by translating basic research advances into new treatments and technologies for those living with type 1 Diabetes.
Trivia
In one of her earliest appearances in TV, she portrayed a receptionist in charge of answering service. Only her voice and her legs were known to the viewer.