The R&B singer who gave to the music world super hits like ‘How Sweet It Is (To Be Loved By You)’ and ‘I Heard It Through the Grapevine’, Marvin Gaye was the man who gave a specific shape to the Motown Records. Aptly called the ‘Prince of Motown’, he redefined the way soul music was created during the 1970s. The highly talented musician had been blessed with a golden voice and an uncanny sense of song-writing. His love for music started from a young age when he started singing in his father’s church choir as a three year old. As a small boy he had a horrible childhood and endured a great deal of abuse at the hands of his father. He was repeatedly beaten up and tortured by the very man who was supposed to have taken care of him and provided him a stable home. Tired of the physical and emotional torture, he sought solace in music. He sang and also learned to play the drums and piano. At the age of 14 he decided to run away from home unable to take it any longer. Thus, he arrived at the music world and left it much richer than he had found it. Eminem
2nd April In History
DID WE MISS SOMEONE?
CLICK HERE AND TELL US
WE'LL MAKE SURE
THEY'RE HERE A.S.A.P
Quick Facts

American Celebrities
Soul Singers
Black Musicians
Black Soul Singers
Lyricists & Songwriters
Childhood & Early Life
He was born to Marvin Gay, Sr. and Alberta. His father worked as a church minister while his mother was a domestic worker. He had five siblings including his brothers from his mother’s previous marriage and father’s extra-marital affair.
He grew up in a troubled home and was frequently subjected to physical and emotional abuse at the hands of his father. Interested in music from a young age, he found solace in singing and playing musical instruments.
He went to the Cardozo High School and also started performing with some local bands. When he was a teenager his father’s behavior towards him worsened and unable to take it anymore Marvin left home and dropped out of school. 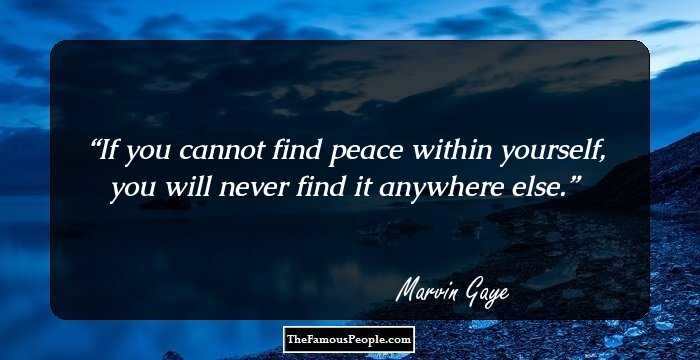 Quotes: You, Never, Yourself, Will, Peace
Continue Reading Below
Career
He dreamt of being a pilot and joined the United States Air Force when he was 17. However, when he was only given menial jobs to do, he was disappointed and faked illness to get discharged.
Along with a friend, Reese Palmer, he formed the vocal quartet, The Marquees. The group later changed their name to ‘Harvey’ and began recording songs. They found work as session singers for the other acts like Chuck Berry.
Eventually Gaye started pursuing a solo career and released his first single, ‘Let Your Conscience Be Your Guide’ in 1961 followed by the album ‘The Soulful Moods of Marvin Gaye’ some weeks later.
His single ‘Stubborn Kind of Fellow’ became his first solo hit in 1962. It reached No. 8 on the R&B charts. The very next year he achieved his first top ten single, ‘Pride and Joy’.
His solo career was going steady and he also started singing duets with female singers like Mary Wells and Tammi Terrell. His partnership with Tammi was a very successful one and the duo gave hits like ‘Ain’t No Mountain High Enough’ (1967) and ‘You’re All I Need to Get By’ (1968).
In a tragic twist of fate, Tammi became ill with a brain tumor and died in 1970. Gaye was shattered by her death and became depressed. He even contemplated suicide and sought solace by immersing himself into music.
In 1973, he brought out the album ‘Let’s Get It On’ marking his first venture into the genres of funk and romance themed music. Though some music critics were turned off by its sexually suggestive lyrics, the album went on to become a big hit.
Buoyed by the success of this album, he embarked on a tour to promote it. Giving live performances further added to his appeal and made him a much sought after artist. He toured throughout 1974 and 1975.
During the late 1970s Marvin was going through a messy divorce and recorded the album, ‘Here, My Dear’ which was dedicated to his failed marriage to his first wife, Anna Gordy.
Continue Reading Below
In 1982 he released his song ‘Sexual Healing’ which went on to become a great hit. The song had elements of funk, boogie, soul and gospel. 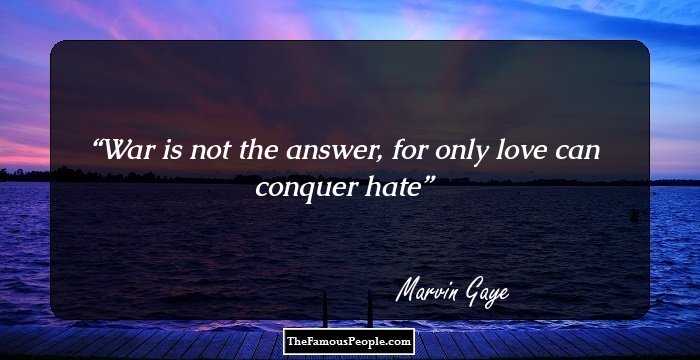 Quotes: Love, War
Major Works
He is best known for the single ‘Sexual healing’ which was released in 1982. The song spent a staggering ten weeks at No. 1 on the Hot Black Singles, and is considered the biggest R&B hit of the 1980s. The single also found success internationally.
Awards & Achievements
He won two Grammy Awards for ‘Sexual Healing’—Best Male R&B Vocal Performance and Best R&B Instrumental Performance—in 1983. The song also won Gaye an American Music Award in the R&B-soul category.
In 1996 he was posthumously given The Grammy Lifetime Achievement Award for his creative and artistic contributions to the world of music. 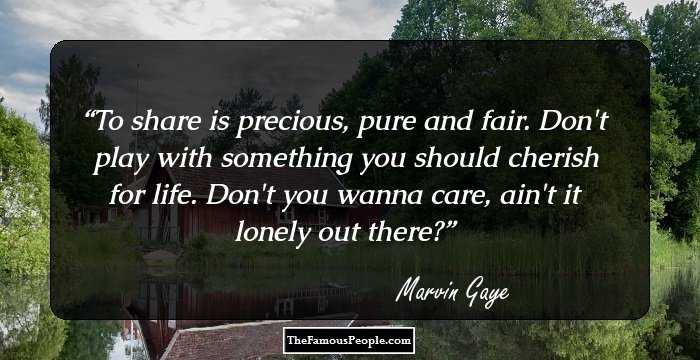 Quotes: You, Life
Personal Life & Legacy
His first marriage was to Anna Gordy who was 17 years his senior. They met in 1960 and tied the knot in 1963. Together they adopted one baby boy. The marriage crumbled and the couple later divorced, leaving Gaye devastated.
He married Janis Hunter in 1977 and had two children with her. The marriage was troubled due to his drug addiction and mental health problems and ended in 1981.
His already problematic personal life came to a tragic end when on April 1, 1984, his father who had always been abusive towards him, shot him dead.

See the events in life of Marvin Gaye in Chronological Order