Marla Ann Maples is an actress and TV personality from the USA. She is also recognized as the former wife of US president Donald Trump. She has done several movies like ‘Happiness’, ‘Switching Lanes’, ‘Black and White’, ‘Loving Annabelle’, ‘Richie Rich's Christmas Wish’, ‘A Christmas Too Many’, ‘For Richer or Poorer’, ‘Something Wilder’, ‘A Sight for Sore Eyes’ and ‘Two of Hearts’, to name a few. On television, Maples has appeared on the shows ‘Designing Women’, ‘The Nanny’, ‘Dancing with the Stars’ , ‘Spin City’ and ‘The Fresh Prince of Bel-Air’. As a host, she has co-hosted the 1996 and 1997 Miss Universe Pageant as well as the 1997 Miss USA Pageant. Besides these, the former Miss Hawaiian Tropic has participated in theatre in the plays ‘The Will Rogers Follies’ and ‘Love, Loss, and What I Wore’. Maples has also worked on the radio show ‘Awakening with Marla’. The multi-faceted lady has even worked in the music industry. She has released an album titled ‘The Endless’. American People
American Women
Georgia Actresses
Scorpio Actresses
American Actresses
Career
In the year 1983, Marla Maples won the ‘Miss Resaca Beach Poster Girl’ contest. Two years later, she won the title of ‘Miss Hawaiian Tropic’. She has worked in several movies, such as ‘Happiness’, ‘Switching Lanes’, ‘Black and White’, ‘Loving Annabelle’, ‘Richie Rich's Christmas Wish’, ‘A Christmas Too Many’, ‘For Richer or Poorer’, ‘Something Wilder’, ‘A Sight for Sore Eyes’ and ‘Two of Hearts’, to name a few.
In 1991, Maples appeared as a special guest timekeeper at WWF WrestleMania VII for the match between Sgt. Slaughter and Hulk Hogan. The same year, she appeared as a guest in the TV series ‘Designing Women’. Then in 1994, she and Trump got featured in an episode of the show ‘The Fresh Prince of Bel-Air’. After this, Maples guest-starred in shows like ‘Spin City’, ‘The Nanny’ and ‘Oprah: Where Are They Now’. Around this time, she also co-hosted the 1996 and 1997 Miss Universe Pageant as well as the 1997 Miss USA Pageant. In 2016, Maples became one of the contestants of ‘Dancing with the Stars’. She then joined the team of ‘The View’ as the guest co-host.
Maples has also hosted a talk show on radio. This show, named ‘Awakening with Marla,’ featured several naturopathic doctors, astrologers, and authors. In August 2013, she released her album titled ‘The Endless’. The album’s single ‘House of Love’ fetched Maples the ‘Hollywood Music in Media Award’ under the category Best New Age/Ambient song. She has also had a stint on the Broadway. In 1992, Maples became a part of Broadway’s ‘The Will Rogers Follies’. She then worked for the off-Broadway production ‘Love, Loss and What I Wore’ in 2011.
Recommended Lists: 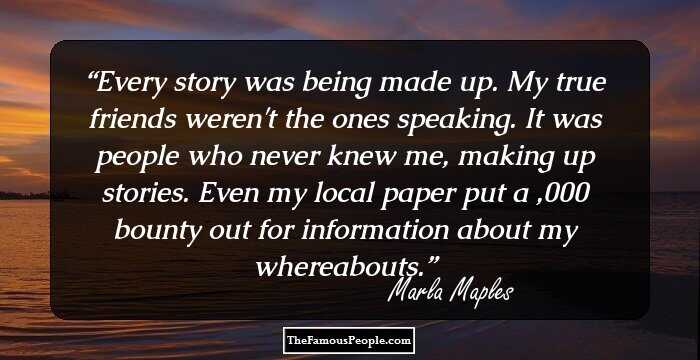 Continue Reading Below
Personal Life
Marla Maples was born as Marla Ann Maples on 27 October 1963 in Cohutta, Georgia, USA, to parents Laura Ann Locklear and Stanley Edward Maples. She studied at the Northwest Whitfield High School. She became involved with Donald Trump in the early 1990s. In 1993 she gave birth to his daughter, Tiffany Ariana Trump, and the couple got married the same year. However in 1999, Marla got divorced from Trump. Talking about the actress’ benevolent nature, she is associated with several charities and non-profit organizations. She is a vocal advocate of ‘Kids Creating Peace’, an organization promoting peace. She has even donated the sales generated from her work projects to those in need.
Recommended Lists: 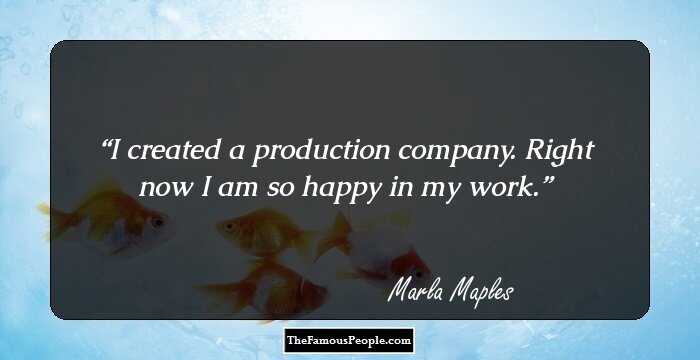 Quotes By Marla Maples | Quote Of The Day | Top 100 Quotes