Mark Richard Hunt, often known as the Super Samoan, is a reputed mixed martial artist and kickboxer from New Zealand. His childhood and adolescence were marred by frequent altercations, almost all of which spiraled into violent confrontations. Hunt was incarcerated twice but got into a brawl soon after his release from prison outside a nightclub. Fortunately, he was spotted by Sam Marsters, who later trained him. Hunt’s career took off when he joined Muay Thai, which was followed by a move to Sydney where he started training under Alex Tui. It gave a jumpstart to his career in kickboxing. In his initial years, Hunt was generally seen by the promoters as a wrestler who could help the favorites gain some practice before showdowns. However, in his maiden K1 tournament, Hunt surprised everyone and clinched his first K1 Championship title. He later earned a UFC contract and fought in many memorable matches. Hunt earned fans for his intensive style and comprehensive victories. He also enjoyed a short but fruitful stint in professional wrestling. His career has seen him earn accolades galore, many of which have been for his uncanny ability to knock out his opponents. New Zealander People
New Zealand Men
Male Sportspersons
New Zealander Sportspersons
Aries Men
Childhood & Early Life
Mark Richard Hunt was born on March 23, 1974 in South Auckland, New Zealand. His family traces its ancestry back to Samoa. Hunt had a troubled childhood as he constantly picked fights and was reprimanded regularly.
Hunt was jailed as a child for violent offences and had to serve two jail terms. He got into a violent fight outside a nightclub right after getting out of jail. This time, however, he was spotted by Sam Marsters. Masters was impressed with his physical ability and decided to take him under his wing.
Hunt started training in Marsters’s gym, where he was coached to become a fighter. Shortly, Hunt won a kickboxing match and impressed many. He later moved to Sydney and trained under Alex Tui. After picking up basics, he finally switched to Liverpool Kickboxing Gym and trained under Hape Ngaranoa.
Continue Reading Below
You May Like

Famous Beautiful Women With Green Eyes
Career
Mark Hunt was approached by many promoters owing to his immediate availability. In 2000, Hunt made his Kickboxing debut at the Oceania Tournament and was largely considered an underdog. He went on to win the Oceania title and surprised everyone.
In 2001, he defended his Oceania title. He also participated in the K-1 World GP and later earned his spot in the World Grand Prix Finals for K-1. He defeated the Brazilian champion Kyokushin in the finals and earned the K-1 World Grand Prix champion’s crown.
In 2002, Hunt fought Le Banner in Paris, but was severely injured in the fight and had to retire during the match. He later returned to defend his World Grand Prix championship but lost to Le Banner during the semifinals. This marked his last appeared in the championships.
He branched into mixed martial arts after succeeding in kickboxing. He participated in many events, including the PRIDE Fighting Championship in Japan. He met reputed fighters, such as Hidehiko Yoshida, Dan Bobish, and Wanderlei Silva. He lost most of his early matches.
In 2005, he attended PRIDE Shockwave and defeated Mirko Cro Cop. He subsequently defeated Yosuke Nishijima at PRIDE 31. He earned his credit in the martial arts world after these victories.
In 2006, he participated in the Open Weight Grand Prix at PRIDE Total Elimination Absolute. He defeated Tssuyoshi Kohsaka in the first round but was defeated immediately by Josh Barnett. He subsequently lost to Fedor Emelianenko, the reigning Heavyweight Champion.
In 2008, Hunt returned to K-1 and fought in the K-1 Super Heavyweight Championship held in Japan. However, despite being a crowd favorite, he lost in the first round.
Later in 2008, Hunt returned to fight Alistair Overeem at the Dream 5 final round for the Lightweight Grand Prix. Unfortunately, he submitted within the first minute.
In 2009, he fought Gegard Mousasi, the Middleweight Champion, in the opening round AT Dream 9, for the Super Hulk Grand Prix. After being dominated by the champion, Hunt submitted in the first round and lost.
Continue Reading Below
In 2010, Hunt was transferred to the UFC, Ultimate Fighting Championship. He made his debut in September when he fought Sean McCorkle. However, he lost against the undefeated champion. Later, he won his match against Chris Tuchscherer and earned the honor of Knockout of the Night.
Over the next few years, he continued winning matches against many established fighters, such as Ben Rothwell and Cheick Kongo.
In 2013, he earned his second ‘Knockout of the Night’ honor after fighting Stefan Struve at UFC on Fuel TV 8. He was also given the ‘Fight of the Night’ honor at the UFC 160 when he fought against Junior dos Santos. This fight was unanimously considered among the best bouts of the year.
His fight against Antonio Silva on December 7, 2013 at the UFC Fight Night 33 was a historical one. Despite it ending in a draw, both participants earned their prize money. They also jointly won the ‘Fight of the Night’ title.
He fought Roy Nelson at the UFC Fight Night on September 20, 2014. It earned him many honors, including his first ‘Performance of the Night’ and ‘2014 Knockout of the Year’ award by World MMA Awards.
Hunt’s life and journeys were chronicled in a documentary titled, ‘The Art of Fighting’, which was released in 2013 on Fuel TV. He also appeared in the Australian film ‘Crazy Murder’ in 2014.
He continued fighting amidst speculations of his retirement. His memorable bouts in 2015 include his competitions against Stipe Miocic, Antonio Silva, and Frank Mir. His victory against Mir earned him the Performance of the Night title.
He extended his contract with UFC in 2016 after singing a multi-million-dollar agreement. He won his match against Derrick Lewis in the UFC Fight Night 110 in June 2017. He also won the Fight of the Night bonus.
In November 2017, Hunt was pulled out of a fight because of his deteriorating health. His fight had brought on him slurred speech and loss of memory, but Hunt was upset as he wanted to fight. He underwent some tests and started preparing to fight in the next season.
In his last year with the UFC, he fought Curtis Blaydes, Alexey Oleynik, and Justin Willis. His last appearance under his UFC contract took place on December 2, 2018. Hunt is currently looking for a new contract to continue fighting.
He recently launched an online apparel company called the Juggernaut. The website sells fight gear and clothing by Hunt, and he is also the company’s director. He named the company after the first gym he formally trained in.
Awards & Achievements
Mark Hunt’s fight against Chris Tuchscherer won him the Knockout of the Night award. He won the same title in his fight against Stefan Struve in 2013. His highest achievement has been winning the Fight of the Night honor when he fought against Junior dos Santos.
Family & Personal Life
Mark Hunt currently lives with his wife Julie Margaret Hunt in Australia, and they have four children. The couple met each other in 1994 at a reggae club. He also has two children, Aurora and Sierra, from his previous marriage. Hunt came from a Mormon household but now practices Christianity.
Hunt turned vegetarian in August 2015 after watching an uncover video of the conditions of poultry factory farms. Despite needing a high-protein diet, Hunt has chosen to remain a vegetarian. He announced his decision via Facebook.
Trivia
In order to support Mark Hunt in his fight against Derrick Lewis, the Games of Thrones star Jason Momoa and Auckland’s UFC team performed Haka before the bout.

See the events in life of Mark Hunt in Chronological Order 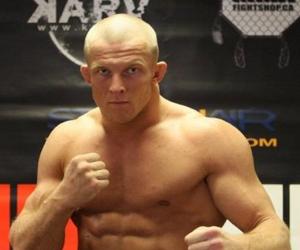 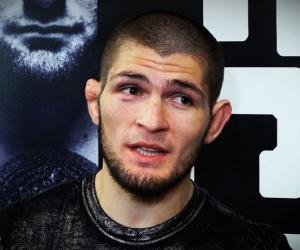