Maria Bello is an American TV and film actress. She is best known for her role in projects, such as ‘E.R.,’ ‘The Cooler,’ and ‘A History of Violence.’ Born in Pennsylvania to a middle class family, Maria wanted to become a lawyer but later decided to become an actress. Upon moving to New York after graduation, she struggled for many years working in off-Broadway productions before landing a regular role in the television series ‘E.R.’ It was not long before she made her debut on the big-screen; she went on to appear in movies like ‘Permanent Midnight’ and ‘Coyote Ugly.’ Upon making the difficult transition from television to film, Bello garnered widespread acclaim for her convincing portrayals of complex female characters. She gained much attention for her roles in movies, such as ‘Auto Focus’ and ‘The Cooler’ which established her as a competent actress. Her popularity increased after playing the award-winning supporting role in the drama film ‘A History of Violence.’ Later, Bello appeared in several commercials and popular films, such as ‘The Mummy: Tomb of the Dragon Emperor’ and ‘Grown Ups.’ It was followed by her return to the small screen as she landed the main role in ‘Prime Suspect.’ Blessed with an incredible beauty and remarkable talent, Bello continues to excel in her craft. Maria Elena Bello was born on April 18, 1967, in Norristown, Pennsylvania, USA, to Joe Bello, a construction worker, and his wife Kathy Bello, a school nurse and teacher. She was the fourth child in their Roman Catholic family. She has two brothers and a sister.

She received her formal education from ‘Archbishop John Carroll High School’ from where she graduated. Later, she got enrolled at the ‘Villanova University’ to pursue a degree in political science. She wanted to become a lawyer.

During one of her drama classes at the university, she became fascinated with the art of acting and decided to pursue an acting career. After majoring in political science, she moved to New York City and appeared in some theater productions. 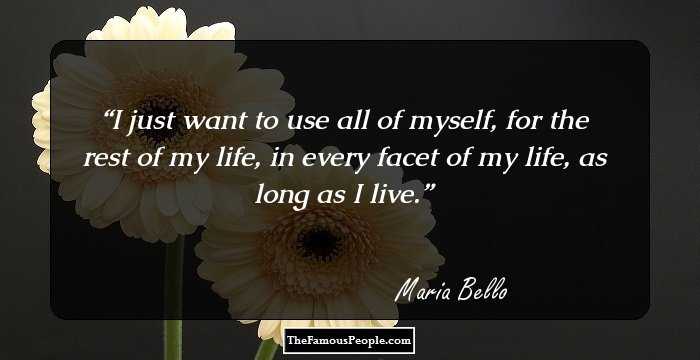 Upon arriving in New York, she appeared in small parts in several off-Broadway productions, such as ‘The Killer Inside Me,’ ‘Small Town Gals with Big Problems,’ and ‘Urban Planning.’

In 1995, she made her television debut in a minor role in Fox's TV series ‘Misery Loves Company.’ In 1996, she landed the female lead role of a corporate spy in the CBS television series ‘Mr. & Mrs. Smith.’

Although the show was canceled after 13 episodes, she managed to gain attention for her performance. Subsequently, she earned a recurring role in the third season of NBC's acclaimed hospital drama series ‘E.R.’ The next year, she was made a regular in the fourth season, playing a pediatrician named ‘Anna Del Amico.’

After gaining widespread acclaim for her television series, she moved to Hollywood and made her big screen debut in the 1998 movie ‘Permanent Midnight.’ The following year, she played a hooker in the movie ‘Payback.’

In 2009, she appeared in ‘The Private Lives of Pippa Lee.’ The following year, she was seen in movies, such as ‘The Company Men’ and ‘Grown Ups.’ She also guest starred in two episodes of the TV series ‘Law & Order: Special Victims Unit.’

In 2011, Bello starred in the U.S. remake of the British television drama series ‘Prime Suspect.’ The show was canceled by NBC after 13 episodes.

2016 was a busy year for the actress as she was seen in many movies, including ‘The 5th Wave,’ ‘The Confirmation,’ ‘Lights Out,’ ‘The Late Bloomer,’ and ‘Max Steel.’

The following year, Maria joined the main cast of CBS’s police procedural drama series ‘NCIS’ where she played ‘Dr. Jacqueline "Jack" Sloane’ in the 15th season. She also appeared in the movie ‘In Search of Fellini.’

In 2018, she was part of movies like ‘Better Start Running’ and ‘Giant Little Ones.’ In 2020, she was seen in David Oyelowo's 'The Water Man,' which was premiered at the 'Toronto International Film Festival.' 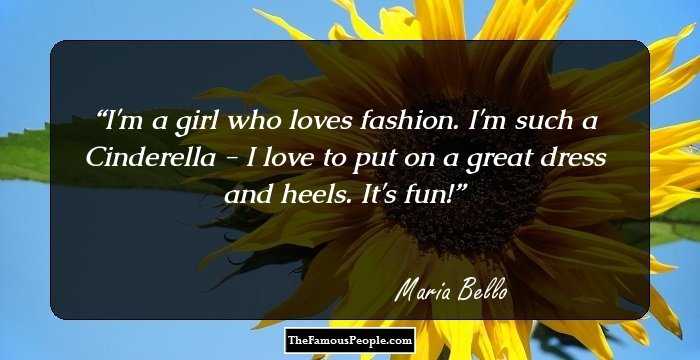 In 2003, she appeared in the romantic drama movie ‘The Cooler’ and garnered much critical acclaim for her performance. Bello played the role of a cocktail waitress who falls in love with a gambler.

She was also praised for her brilliant performance in the 2005 crime thriller ‘A History of Violence,’ where she played ‘Edie Stall’ whose husband's unknown past catches up with him. She received several awards for her acting in the film. 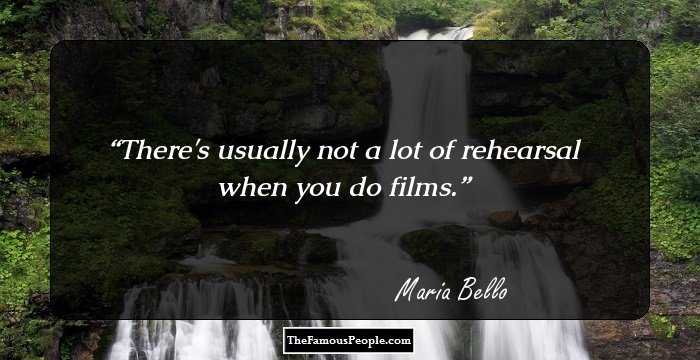 Bello had a relationship with Dan McDermott, a TV executive. In 2001, the couple had a son together and later separated.

In 2013, Bello wrote about her same-sex relationship with her friend Clare Munn.

She got engaged to French chef Dominique Crenn in December 2019 when they were vacationing in Paris. She announced her engagement in February 2020 while making their first official appearance as a couple at the 92nd ‘Academy Awards.’

Quotes By Maria Bello | Quote Of The Day | Top 100 Quotes

See the events in life of Maria Bello in Chronological Order