Advanced Search
Loretta Young was an American film actress who mesmerized the audience with her ethereal beauty during the 1930s and the 1940s. She was not only known for her beauty but was also famous for her serenity and grace which she maintained throughout her film career. She was a great actress and also devoted time to her family. Her sisters also became actresses but did not get the same success as Loretta who had the advantage of being more beautiful than them. She started playing roles in films from the age of four and by the age of fourteen had become an accomplished actress. From being a child actor she took a quantum leap to become the leading lady in many films. She worked in almost 100 films with famous directors such as Cecil B. DeMille, Orson Welles and Frank Capra. She got the opportunity to act opposite famous actors like Tyron Power, Cary Grant, Spencer Tracy and Clark Gable. She was one of the first female stars who commanded a six-figure salary. She was equally successful in captivating the audience on the television apart from the big screen. American Celebrities
Utah Actresses
American Actresses
Capricorn Actresses
Women Film & Theater Personalities
Childhood & Early Life
Loretta Young was born Gretchen Michaela Young in Salt Lake City, Utah, USA on January 6, 1913. Her father was John Earle Young and her mother was Gladys Royal.
Her parents separated when she was only three-year-old.
She and her two elder sisters, Polly Ann and Elizabeth Jane moved with their mother to Hollywood, California, where Gladys started a boarding house.
By the time Loretta was four she had started appearing as a child extra in silent films. She appeared in ‘The Only Way’ in 1917 as a weeping child lying on an operating table. Her mother’s brother-in-law who was an assistant director helped Loretta get the role.
Later that year she appeared in another small role in ‘The Primrose Ring’ which starred Mae Murray.
Mae Murray was very impressed with little Loretta and offered to adopt her. Loretta stayed with the Murrays for a year and a half during which she appeared briefly in ‘The Sheikh’ in 1921.
Loretta and her sisters attended the ‘Ramona Convent Secondary School’ and helped their mother in running the boarding house after school.
When Loretta was 10, her mother Gladys married one of the boarders named George Belzer. Two years later she gave birth to a daughter, Georgianna.
In 1927 she played a small role in ‘Naughty But Nice’ and showed great promise of becoming an successful actress at the age of fourteen.
She signed a contract with ‘First National Studio’, later known as ‘Warner Bros’ at the age of 14.
She changed her name to Loretta Young, and soon became a leading lady with the help of her natural brown hair, exquisite face and satin complexion. Continue Reading Below
Career
In 1928 she acted as ‘Denise Laverne’ in ‘The Magnificent Flirt’ and then in ‘The Head Man’ in the same year.
During the 1920s and 1930s she acted in a number of films and went on to make about six to nine films in a year.
She appeared in ‘The Second Floor Mystery’ in 1930 opposite Grant Withers who was nine years her senior.
In 1931 both of them co-starred in the film ‘Too Young to Marry’ which seemed ironical at the time.
In the mid 1930s she left ‘First National Studios’ and joined its rival ‘Fox’ where she had worked earlier on loan.
She acted in Frank Capra’s ‘Platinum Blonde’ in 1931, Cecil B. DeMille’s ‘The Crusade’ in 1935 and Orson Welles’ ‘The Stranger’ in 1946.
In 1935 she made the film ‘Call of the Wild’ with Clark Gable. She had an affair with him and became pregnant. She kept her pregnancy a secret and left for Europe with her mother where she gave birth to a daughter, Judith on November 6, 1935.
In 1938 she played the role of ‘Sally Goodwin’ in the film ‘Kentucky’ opposite Walter Brennan who won the ‘Academy Award for Best Supporting Actor’ for his role as ‘Peter Goodwin’.
During the Second World War she acted in the film ‘Ladies Courageous’ in 1944 which was about women in the war.
Continue Reading Below
She reached the pinnacle of success in 1947 when she won the ‘Academy Award for Best Actress’ for her role in ‘The Farmer’s Daughter’ where the farm girl rises through the ranks to become a congresswoman.
The same year she acted in a delightful fantasy film ‘The Bishop’s Wife’ opposite David Niven and Cary Grant which was also a great hit.
In 1949 she starred in ‘Mother Is a Freshman’ with Rudy Vallee and Van Johnson.
In 1949 she won a second nomination for the Oscar for her role in ‘Come to the Stable’ but lost the award to Olivia de Havilland.
Her final big screen role was in ‘It Happens Every Thursday’ which was made in 1953.
She retired from films in 1953 to start an equally successful career by hosting a half-hour anthology TV series ‘The Loretta Young Show’ in which she also starred in many episodes. This show ran on NBC from September 1953 to September 1961.
She took some time off after the end of this series and returned to the TV in 1962 with ‘The New Loretta Young Show’ which was not very successful and ran for only one season.
Loretta disappeared from the world of entertainment for the next 24 years and appeared in small screen in ‘Christmas Eve’ in 1986. She made a final appearance in 1989 in the TV film ‘Lady in the Corner’. Quotes: You, Love
Continue Reading Below
Awards & Achievements
Loretta Young won the ‘Academy Award for Best Actress’ in 1947 for ‘The Farmer’s Daughter’.
She won the ‘Emmy Award for Best Actress in a Dramatic Series’ in 1954, 1956 and 1958.
In 1986 she won a ‘Golden Globe’ for the film ‘Christmas Eve’.
Personal Life & Legacy
The 17-year old Loretta made headlines when she eloped with Grant to get married in Yuma, Arizona. The marriage was however annulled in 1931.
She married businessman Tom Lewis in 1940 and from then on her daughter started to be called Judy Lewis though Tom did not adopt her officially.
She gave birth to a son named Christopher four years after marrying Tom Lewis and later on had a second son named Peter.
She divorced Tom Lewis in the early 1960s.
Loretta married Jean Louis on August 10, 1993 but he passed away on April 20, 1997. She remained single after that.
Loretta Young died of ovarian cancer in Los Angeles, California, USA, on August 12, 2000 at the home of her step sister Georgianna. 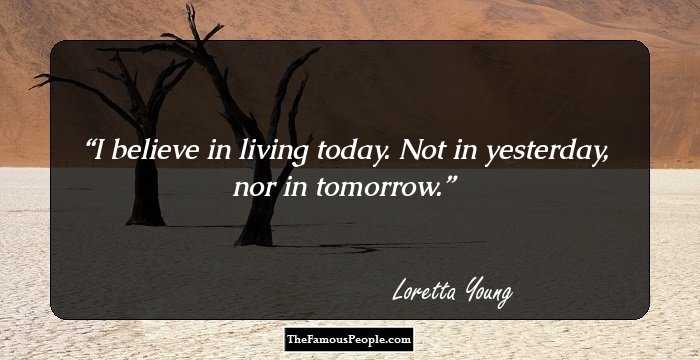 Quotes: Believe, Living, I
Humanitarian work
Loretta Young was a devout Roman Catholic and was involved with many charitable organizations after retirement.

See the events in life of Loretta Young in Chronological Order