Who is LL Cool J?

LL Cool J is a ground-breaking hip-hop artist, most celebrated for popularizing hip-hop music all across the globe. The double-Grammy winner fought against domestic violence in his childhood to emerge as a child-prodigy and started composing tracks by the age of 11. Dealing with childhood abuse toughened him up, something which is reflected in his powerful and hard-hitting lyrics. He signed with a new Record Company, ‘Def Jam Recordings’, and was single-handedly responsible for its success. He continued his relationship with the company for 23 years, producing 13 albums in the process. Despite his prospering music career, LL Cool J was not one to get complacent or rest on his laurels and instead, tried his hand in a new field, acting. His acting career had a slow start, but in time LL Cool J established his credentials as an actor with a string of power-packed performances in films as well as TV shows. LL Cool J has also displayed his versatility, as he started a music record label, started his own clothing line and also co-authored four books. Despite an immensely successful career, LL Cool J remains a devoted husband and father and continues to be a music icon. African American Actors
Actors
Rappers
Black Actors
Childhood & Early Life
LL Cool J was born to James and Ondrea Smith in Long Island, New York, and was christened as James Todd Smith.
Todd, as he was often addressed, had a very turbulent childhood and at the young age of four, he witnessed his mother and grandfather getting shot at by his own father which led to his parents’ separation.
His mother entered into a relationship with a physical therapist named ‘Roscoe’. LL Cool J, in his autobiography and also in interviews, has accused Roscoe of abusing him physically and psychologically. However, Roscoe has denied these allegations.
Todd’s interest in hip-hop music began when he was just nine. Two years later, he was already composing songs on a DJ system his grandfather had gifted him.
Todd and his friend came up with the pseudonym LL Cool J, which stood for ‘Ladies Love Cool James’. 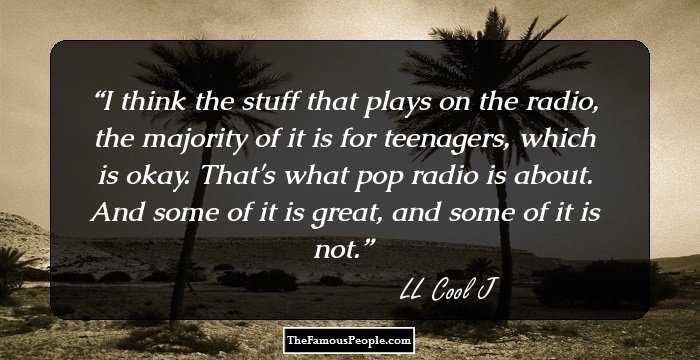 Black Singers
Black Rappers
Hip Hop Singers
Black Hip Hop Singers
Career
In 1984, at the age of 16, Todd met Rick Rubin, a student of New York University. Rubin was impressed by Todd’s music and both of them created a single, ‘I Need a Beat’.
They sent the single to an artist manager Russell Simmons, who liked it too. Later that year, Simmons and Rubin founded their record company– ‘Def Jam Recordings’ and launched LL Cool J’s first song, ‘I Need a Beat’, which sold more than 100,000 copies.
This success gave Todd confidence as he dropped out of school and started working on an album, ‘Radio’, which got released in 1985. ‘Radio’ received a lot of positive feedback for its powerful lyrics and sold more than 1.5 million copies.
Todd also kick-started his acting career in 1985, appearing as himself in the film ‘Krush Groove’, which was about the beginning of ‘Def Jam Recordings’.
Todd’s next album, ‘Bigger and Deffer’, was released in 1987 and was a massive success. It featured the tracks, ‘I’m Bad’, ‘I Need Love’ and ‘Bristol Hotel’. The album also spent 11 weeks at the No. 1 spot on Billboard’s R&B charts, selling more than 3 million copies in the process.
LL Cool J’s third album, ‘Walking with a Panther’ was released in 1989 and although it was a commercial success, his fans did not like the presence of so many ‘soft’ songs in the album.
In response to the fans’ criticism, he released ‘Mama said Knock You Out’, which had hard-hitting tracks and was high on energy. The album is one of his biggest successes till date and sold over 2.7 million copies.
The resulting fame from his album’s success earned him roles in films such as ‘The Hard Way’ and ‘Toys’. In 1993, he performed at President Clinton’s inauguration ceremony at the ‘Lincoln Memorial’.
In 1993, Todd started his own music label called ‘P.O.G.’, or ‘Power Of God’. He also formed the music-production company ‘Rock The Bells’ which worked with artists like ‘Amyth’, ‘Smokeman’, ‘Natice’, etc.
Continue Reading Below
In 1995, he starred as the lead in the crime-drama movie ‘Out-of-Sync’. Although the film did not do well commercially, he came to the attention of NBC-TV and was cast in their comedy series ‘In the House’. The show was broadcast till 1999.
In 1995, he released his next album ‘Mr Smith’, featuring the track ‘Hey Lover’. This song was inspired from Michael Jackson’s song ‘The Lady in my Life’. This not only became LL Cool J’s first VH1 video, but also won him a Grammy Award. Overall the album performed very well and sold over 2 million copies.
In 1996, he released the album ‘All World: Greatest Hits’, a collection of his best songs so far.
From 1996 to 1998, he played supporting roles in a few films such as ‘The Right to Remain Silent’, ‘Caught Up’, ‘Woo’ and ‘Halloween H20: 20 Years Later’. He also appeared in the second season of the Television drama series ‘Oz’.
In 1999, among other films, he was a part of the blockbuster science-fiction horror film ‘Deep Blue Sea’, which grossed more than $250 million worldwide.
In 2000, Todd released the album ‘G.O.A.T.’, the full-form of which was ‘Greatest of All Time’. The album reached the top of US Billboard 200 list and remains his only album to do so.
From 2000 onwards, Todd continued to act in various movies and TV shows such as ‘Kingdom Come’, ‘Deliver Us from Eva’, ‘S.W.A.T.’, ’Last Holiday’ and ‘Slow Burn’.
From 2000 to 2008, in spite of having a promising acting career, LL Cool J continued to churn out albums which were moderate-to-big successes. ‘10’, ‘The DEFinition’ and ‘Todd Smith’ all helped him in cementing his status as one of the best hip-hop artists of his time.
In 2008, he released his last album with ‘Def Jam Recordings’, ‘Exit 13’. The album also featured a host of other artists, such as ’50 Cent’, ‘Sheek Louch’, ‘Fat Joe’, ‘Ryan Leslie’ etc.
Continue Reading Below
In 2008, LL Cool J started a record label called ‘Boomdizzle’ that doubled up a as a social networking site as well. The website allows amateur artists to upload their music, which is then rated by the users.
In 2009, Todd launched his own clothing of urban apparel called ‘LL Cool J collection’ at ‘Sears’ stores.
In 2009, LL Cool J was cast as a regular in the still-running CBS TV series ‘NCIS: Los Angeles’, in which he plays special agent ‘Sam Hanna’, a Navy investigator.
LL Cool J released his next and most recent album ‘Authentic’, in 2013, featuring appearances from numerous other artists including ‘Eddie Van Halen’, ‘Snoop Dogg’, ‘Seal’ and ‘Brad Paisley’. 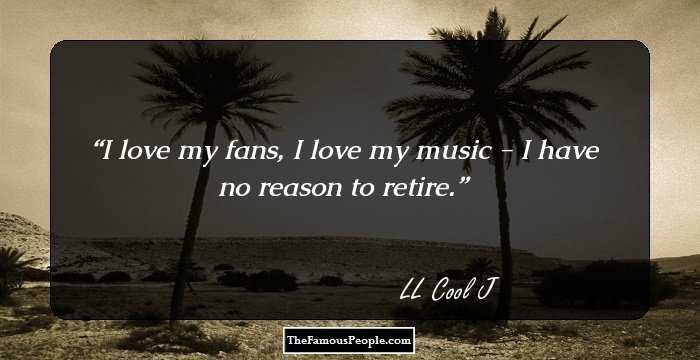 Black Film & Theater Personalities
American Men
New Yorkers Actors
Tall Celebrities
Major Works
LL Cool J’s revolutionary 1987 album ‘Bigger and Deffer’ is his most successful album till date. The album includes a commercially successful ‘rap ballad’, ‘I Need Love’, the first of its kind. The album sold more than 3 million copies in the United States itself, and is the biggest selling album of LL Cool J’s career.
LL Cool J’s 1990 album ‘Mama Said Knock You Out’ is his masterpiece and is considered a classic. LL Cool J overcame the disappointment of his previous album, and was back with a bang. Four singles from the album became big hits, including the Grammy-winning title track.
Recommended Lists:

Tall Male Celebrities
Male Rappers
Male Singers
Capricorn Actors
Awards & Achievements
In 1991, LL Cool J won an ‘MTV Video Music Award’ for his hit track ‘Mama Said Knock You Out’ in the category ‘Best Rap Video’.
LL Cool J won his first Grammy award in the category ‘Best Rap Solo Performance’ in 1992 for his song ‘Mama Said Knock You Out’.
Continue Reading Below
In 1997, he won his second Grammy, again in the same category of ‘Best Rap Solo Performance’ for the song ‘Hey Lover’ from the album ‘Mr. Smith’.
In 2000, he won a ‘Blockbuster Entertainment Award’ in the category ‘Favourite Supporting Actor – Action’ for his role in the film ‘Deep Blue Sea’.
In 2013, he won a ‘Teen Choice Award’ in the category ‘Choice TV Actor: Action’ for his role in ‘NCIS: Los Angeles’. 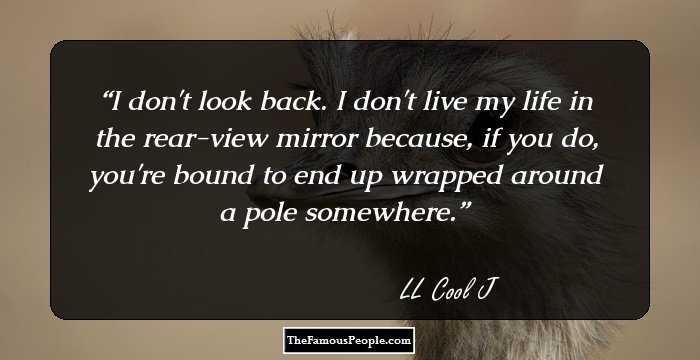 American Actors
American Rappers
Capricorn Rappers
American Singers
Personal Life & Legacy
LL Cool J married Simone Smith in 1995 and fathered four children with her. Simone was diagnosed with bone cancer in 2004, but eventually recovered.
In 2012, LL Cool J broke a burglar’s nose and jaw after he caught him in his house. He later handed over the burglar to the police.
Recommended Lists: