Mary Jean "Lily" Tomlin is an American actress, writer, producer, and comedian. She was born and brought up in Michigan in a middle class family. She was interested in art and theater from a very young age and started doing stand-up comedy in comedy clubs in Michigan and later in New York. She got her first role in NBC’s ‘Rowan & Martin’s Laugh-In,’ which made her famous; she went on to play multiple roles in the sketch comedy show. After achieving popularity by appearing in the show, Tomlin produced her own comedy videos, portraying characters from ‘Rowan & Martin’s Laugh-In.’ One of these videos won a ‘Grammy.’ She started appearing in comedy motion pictures, starring opposite Hollywood stars like Steve Martin, Meryl Streep, etc. She has been quite famous on the Broadway as well; she is known as the only comedienne ever to perform a solo comedy act. She is the recipient of many awards, including ‘Primetime Emmys,’ ‘Tony Award,’ ‘Woman in Film Crystal Award,’ and ‘Grammy Award.’ After 42 years of courtship, she married writer/producer Jane Wagner in 2013. 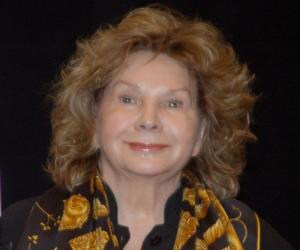 Lily Tomlin was born Mary Jean Tomlin on September 1, 1939, in Detroit, Michigan, USA, to Guy Tomlin and Lillie Mae Tomlin. Her father was a factory worker and mother was a nurse’s aide. Their family had relocated from Kentucky to Detroit during the Great Depression.

Tomlin did her schooling at ‘Cass Technical High School.’ She then attended the ‘Wayne State University’ where she showed great interest in theater and performing arts. Thereafter, she started doing stand-up comedy in New York City. 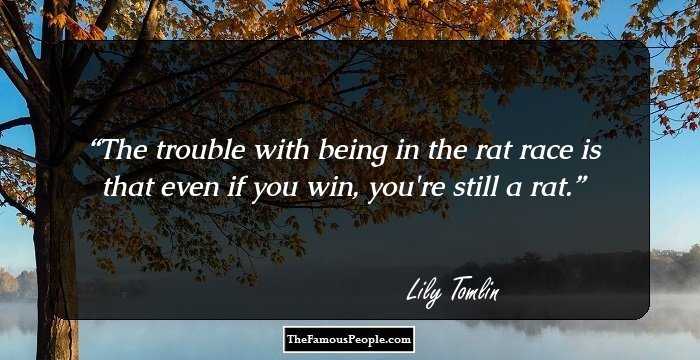 In 1969, after Tomlin appeared on ABC’s ‘The Music Scene’ as a hostess, she became part of NBC’s popular comedy show ‘Rowan & Martin’s Laugh-In.’ She appeared in the show regularly, playing various characters.

In 1971, Tomlin came up with her first comedy video called ‘This Is A Recording’ on ‘Polydor Records.’ It was based on ‘Ernestine,’ one of her characters from ‘Rowan & Martin’s Laugh-In.’ It became the highest-charting album by a female comedian.

In 1972, she released her second comedy album ‘And That’s The Truth,’ which was based on ‘Edith Ann,’ her character from ‘Rowan & Martin’s Laugh-In.’ She received a ‘Grammy’ nomination for ‘Best Comedy Recording’ for the album.

From 1975 to 1984, Tomlin landed various comic roles in movies like ‘Nashville,’ which was directed by Robert Altman, ‘Nine to Five,’ a working women’s vindictive comedy, and ‘All of Me,’ where she starred opposite Steve Martin.

In 1985, Tomlin did a one-woman Broadway show called ‘The Search For Signs of Intelligent Life in the Universe,’ which was written and directed by Jane Wagner. Tomlin won a ‘Tony Award’ for the show, which was later adapted into a motion picture.

�In 1989, she did another motion picture called ‘Big Business,’ a comedy movie, in which she starred alongside Bette Midler. Tomlin and Midler played twin sisters in the film.

From 1994 to 1997, she was part of an animated television series called ‘The Magic School Bus.’ She voiced ‘Ms. Frizzle’ in the series. Around the same time, she appeared in a sitcom TV series titled ‘Murphy Brown.’

In 2005-06, she appeared in the popular sitcom ‘Will & Grace’ in which she played the character of ‘Margot.’ Around the same time, she frequently appeared in ‘The West Wing.’

From 2008 to 2009, Tomlin did a recurring role in the famous television series ‘Desperate Housewives’ where she played ‘Roberta Simmons.’ She also appeared in an episode called ‘The Last of the Red Hat Mamas’ in ‘The Simpsons.’

In 2012, Tomlin made a guest appearance in the HBO series ‘Eastbound and Down.’ She also acted in a TV series titled ‘Malibu Country,’ starring alongside Reba McEntire.

Tomlin starred in the comedy-drama film ‘Grandma’ in 2015. 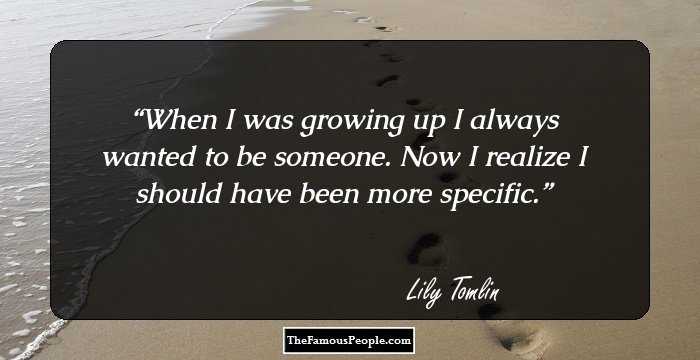 She received the ‘Screen Actors Guild Life Achievement Award’ in 2017.

In 1971, Tomlin met writer/producer Jane Wagner. Tomlin invited Wagner to work with her on a comedy album and eventually started dating her. She has always been quite open about her sexual orientation.

On December 31, 2013, Tomlin and Wagner married in a private ceremony in Los Angeles, after 42 years of courtship. 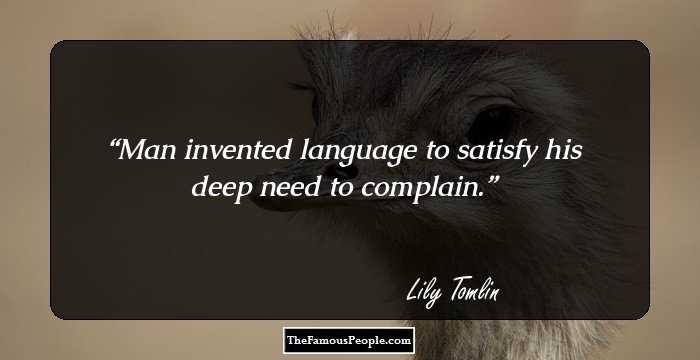 Tomlin is an avid supporter of the feminist and gay movements. She was involved in a movie called ‘Modern Scream,’ which was a gay-friendly movie.

She was inducted into the ‘Michigan Women’s Hall of Fame’ in 1998.

Quotes By Lily Tomlin | Quote Of The Day | Top 100 Quotes

See the events in life of Lily Tomlin in Chronological Order