Lecrae Devaughn Moore, or simply Lecrae, is an American Christian rapper, songwriter, and record producer who performs both as a solo artist and as the leader of a group named ‘116 Clique’. He had a troubled beginning in life but all that changed after he found his faith at 19. Heavily influenced by 2Pac Shakur, and motivated by his new found faith, he ventured into a musical career. He and his friend Ben Washer set up their own independent record label ‘Reach Records’ and through it, he released his debut album ‘Real Talk’ in 2004. In the following years, he brought out six more studio albums, three mix tapes, and two EPs as a solo artist and three studio albums, one remix album, and one EP with his group. He has received six ‘GMA Dove Awards’, two Grammys, two ‘BET Awards’ and more. Lecrae is very active in the community and in 2005, he established ‘ReachLife Ministries’, the mission of which was to “bridge the gap between biblical truth and the urban context”. He is a vocal supporter of the preservation of responsibility and believes that fatherhood should be considered as a value to be installed among men in the United States. He has authored several op-ed articles on race relations in the modern-day America which were published by ‘Billboard’. American People
Black Singers
Black Rappers
Black Musicians
Record Producers
Childhood & Early Life
Lecrae Devaughn Moore was born on October 9, 1979, in Houston, Texas, USA. His father had always been absent from his life and later became a drug addict. He was raised by his poor but hardworking mother and grandmother. He attended services with them at their local church but the initial response to religion was indifferent at best. Growing up, he lived in San Diego, Denver, and Dallas.
He suffered sexual molestation at the hands of a female baby sitter when he was eight, and according to Lecrae, it left a long-term negative impact on his views on sexuality. In a life full of abuse and violence, hip hop provided him with a refuge.
Besides 2Pac who he admired for his rapping skills, he also looked up to his uncle who introduced him to a life of crime. He began doing drugs at 16 and soon started dealing as well. He kept a Bible with him that his grandmother had given him as a good luck charm.
The turning point in his life came when he was arrested for drug possession. The officer let him go upon Lecrae’s promising that he would read and follow the Bible. He thus started visiting the church again. Upon an invitation from a friend, he also started attending Bible studies.
He was once involved in an accident where he wrecked his car but he himself came out unscathed. This incident further strengthened his belief in Christ and he devoted his life fully to his faith. He returned to his college, the ‘University of North Texas’ and volunteered and sang at a juvenile detention centre. 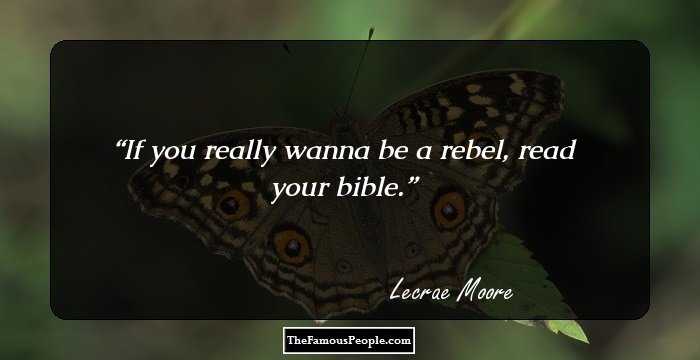 The Sexiest Men Of 2020, Ranked
Career
Six years after his conversion, Lecrae Moore released the album ‘Real Talk’ (2004) through ‘Reach Records’, a label he had founded with his friend Ben Washer. It reached #29 spot on the ‘Billboard Gospel Album’ chart after being re-released in 2005 by ‘Cross Movement Records’.
In 2005, he formed ‘116 Clique’ with other artists who had signed with ‘Reach Records’. The group owes its name to the Bible Verse ‘Romans 1:16’. They debuted with ‘The Compilation Album’ in the same year. They have since released three more albums, ‘The Compilation Album: Chopped & Screwed’ (remix, 2006), ‘13 Letters’ (2007), and ‘Man Up’ (2011), and one EP, ‘Amped’ (2007).
He was nominated for a ‘Stellar Award’ for the ‘Rap/Hip-Hop/Gospel CD of the Year’ for his second solo album ‘After the Music Stops’ (2006). In 2008, he put out his third studio album ‘Rebel’.
In his fourth studio album, ‘Rehab’ (2010), Lecrae talks about freedom from inhibiting addictions and habits. Both Lecrae and his album received accolades in the 2010 ‘Rapzilla.com staff picks’, being hailed as the ‘Artist of the Year’ and the ‘Album of the Year’, respectively.
His fifth studio album, ‘Rehab: The Overdose’ (2011) was a direct follow-up to ‘Rehab’, both being highly conceptual works. While ‘Rehab’ was about the victory over addiction, ‘Rehab: The Overdose’ focused on attaining "grace, love, peace and hope" in Jesus. He won his first two Doves because of this album, one for the ‘Rap/Hip Hop Album of the Year’ and the other for the ‘Rap/Hip Hop Recorded Song of the Year’ for the track, ‘Hallelujah’.
’Gravity’, released on September 4, 2012, was his sixth studio album and had 15 songs with a total runtime of 57 minutes. It peaked on the ‘Rap Albums’, ‘Christian Albums’, ‘Gospel Albums’, and ‘Independent Albums’ charts.
Lecrae released his first mixtape ‘Church Clothes’ on May 10, 2012, through digital download for free. It was followed by ‘Church Clothes 2’ (November 7, 2013), and ‘Church Clothes 3’ (January 15, 2016). He has also released two Extended Plays till date, the EP version of ‘Church Clothes’, and ‘Gravity: The Remix EP’, both released in 2012.
He has collaborated with the likes of Trip Lee, Tedashii, Canon, Mali Music, and Ty Dolla Sign. ‘Columbia Records’ signed him in May 2016, in a contract between them and his label. His most recent work, a track named ‘Hammer Time’, which is a collaborative effort with 1k Phew, was released on June 23, 2017.
On May 3, 2016, he published his memoir titled ‘Unashamed’ through ‘Broadman & Holman Publishers’. It debuted at #19 spot on the ‘New York Times Best Sellers’ list.
Continue Reading Below 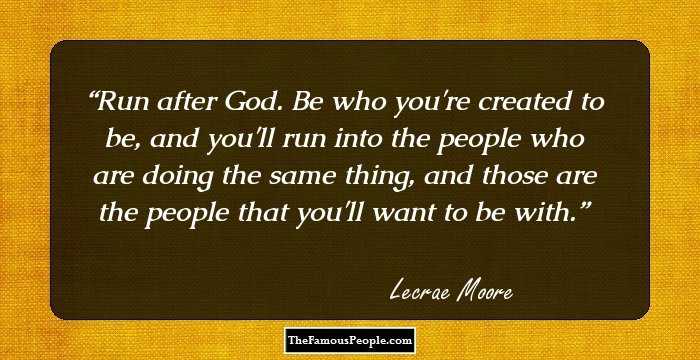 Quotes: God
Philanthropic Works
In 2011, Lecrae, through ‘116 Clique’ and the ‘ReachLife Ministries’, instigated the campaign ‘Man Up’, focused on providing guidance to young urban males on fatherhood and Biblical manhood. In March 2015, ReachLife was deactivated and ‘116 Clique’ shifted its attention to contribute to ‘Peace Preparatory Academy’, a Christian school in Atlanta.
In May 2013, he worked alongside several other celebrities on a media initiative named ‘This is Fatherhood’. Jay Z, Barack Obama, Joshua DuBois, Lecrae himself, and others have appeared in the initiative’s promotional public service announcement videos.
Major Works
In a career marked by successful artistic ventures and awards, Lecrae’s greatest musical achievement is unarguably his seventh and the latest studio album ‘Anomaly’, released on September 9, 2014. It was the first album in history to debut at #1 on both ‘Billboard 200’ and ‘Top Gospel Albums’ charts. It was also certified Gold by the RIAA. 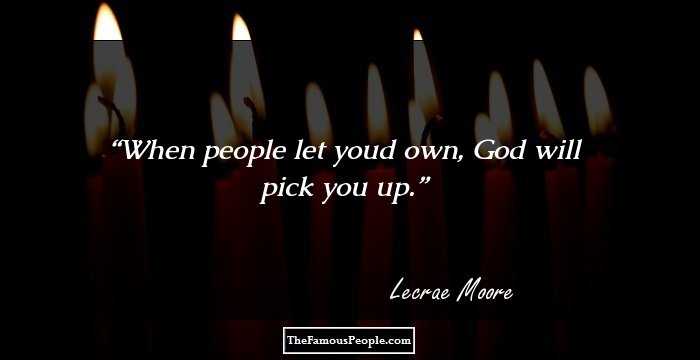 Quotes: You, God, Will
Awards & Achievements
Lecrae Moore received a Grammy in 2013 for the ‘Best Gospel Album’ for his sixth studio album ‘Gravity’. He won his second Grammy in 2015 for the ‘Best Contemporary Christian Music Performance/Song’ for the track ‘Messengers’ which also featured the Christian pop band ‘For King & Country’.
He was named the best gospel artist at the ‘2015 BET Awards’. In 2017, he was the recipient of the ‘BET Best Gospel/ Inspirational Award’ for the song ‘Can’t Stop Me Now (Destination)’.
On March 14, 2016, he was conferred with an honorary doctorate from ‘Canada Christian College’.
Personal Life & Legacy
Lecrae Moore met his wife Darragh at a Bible study when they were both teenagers. They have three children together, two sons and a daughter. The family resides in Atlanta, Georgia.
In 2002, he was informed by his then girlfriend that she was pregnant with his child. The couple had an abortion, a decision which he has regretted since. The incident was the subject of the song ‘Good, Bad, Ugly’ from ‘Anomaly’.
Trivia
Lecrae portrayed the character Dr. Darnall Malmquist in the 2014 independent film ‘Believe Me’.

Quotes By Lecrae Moore | Quote Of The Day | Top 100 Quotes

See the events in life of Lecrae Moore in Chronological Order