Larry King was a legendary talk show host who hosted the popular nightly interview television program, Larry King Live, on CNN from 1985 to 2010. In his heydays, he was the first individual to host a worldwide phone-in TV talk show, which catapulted him to fame. His talk shows would comprise of a popular mix of celebrity interviews, up-to-date discussions, politics and other tomfooleries. In his long and successful broadcasting career, he conducted more than 40,000 interviews and even became the first individual to host ‘sit-downs’ with most U.S. Presidents since the time of Gerald Ford. He also made his mark in the international arena, when he hosted a momentous tour on the Middle East Peace course with Yasser Arafat, King Hussein and Yitzhak Rabin. In a career spanning five decades, Larry King became legendary, by quizzing high-profile guests such as Madonna, Tony Blair, George H.W. Bush, Bill Clinton, Elizabeth Taylor, Margaret Thatcher, Barbara Streisand and Malcolm X, to name a few. His immense broadcasting success also went on to earn him the titles; ‘Muhammad Ali of the Broadcast Interview’ and ‘Master Interviewer’. In addition to his broadcast credits, he also made brief appearances in films and television. American Celebrities
Film & Theater Personalities
American Men
Male Media Personalities
American Media Personalities
Childhood & Early Life
Larry King was born as Lawrence Leibel Harvey Zeiger to Edward Jonaton Zeiger and Jennie, both Jewish immigrants, in Brooklyn, New York City.
When he was 9 years old, his father passed away of heart disease at the age of 44. The sudden death of his father had a terrible impact on Larry and slowly he lost interest in academics. His mother decided to opt for government welfare in order to support both her sons, due to financial constraints.
After he graduated from high school, he decided that he would work to support his mother and never went to college. However, from very early on, his lifelong dream was to have a career in the radio business.
When he was working to support his mother, he met a CBS staff presenter, who urged him to travel to Florida, which offered great scope for raw broadcasters. Thus, he boarded a train and began his hopeful journey to Miami. 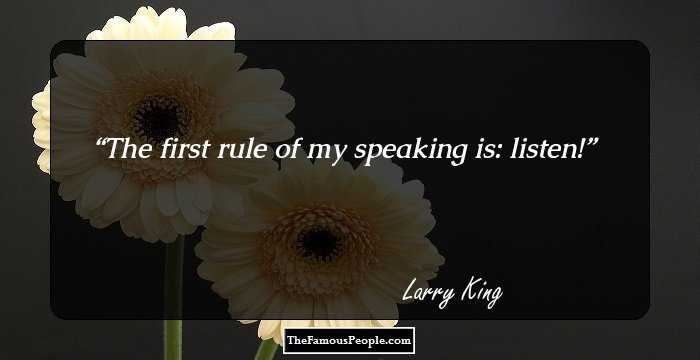 After a number of early struggles, Larry King persevered and got his first job in the radio. Here, he was asked to perform a number of odd jobs before he was finally given his first assignment as a disc jockey on May 1, 1957. It was during this time, he acquired the name, ‘Larry King’.

He was given an opportunity to host the mid-morning show for WIOD in Miami Beach and this show propelled him to glory. In 1960, he hosted ‘Miami Undercover’, on which he presented debates pertaining to important issues of the time.

For the 1970-71 seasons, he was given further opportunities as a color pundit for the ‘Miami Dolphins’ of the National Football League. However, he was fired at the end of the season when he was arrested after being accused of grand larceny by a former business partner. The charges were dropped the following year.

He spent the next few years refreshing his career and did a brief spell as a color commentator for ‘Shreveport Steamer’ of the World Football League. It was during this time, he also hosted a sports-talk show, ‘Sports-a-la-King’.

After persisting for a successful breakthrough, he finally achieved what he was hoping for. He went national in 1978, getting the night talk show slot on the Mutual Broadcasting System.

In 1982, he began writing a fixed newspaper column for ‘USA Today’; something that he did for almost two decades of his life.

In 1984, he hosted his very own CNN show, ‘Larry King Live’, where he invited a number of illustrious guests and discussed all kinds of issues from diviners to UFO conspiracy theories and news from the entertainment industry.

During the same time, his night talk show on the Mutual Broadcasting System continued to garner widespread popularity, running upto 1994. Thereafter he moved to the afternoon slot but it was not as popular as the night slot, with a very low percentage of King’s original midnight audience size. The show was eventually handed over to David Brenner.
In 1997, he signed an entreaty to the-then German Chancellor, Helmut Kohl, with 30 other personalities, which protested the handling of scientologists in Germany, comparing it to the likes of the treatment of Jews during Nazi Germany.
Continue Reading Below
In 2004, he lent his voice for the step-sister, Doris for the animated film, ‘Shrek 2’. Three years later, he once again lent his voice for ‘Bee Movie’.
In 2010, after nearly two decades since its inception, King announced that he would resign as the host of ‘Larry King Live’, but would remain with CNN to host sporadic specials. The final episode of the show was aired on December 16, 2010.
In the wake of the Haiti earthquake in 2010, he hosted a two-hour special explaining to viewers how they can contribute or take action to help those affected in a special titled, ‘Haiti: How You Can Help’.

His weekly political talk show ‘Politicking with Larry King’ was also aired on Hulu and RT America from 2013 to 2021. 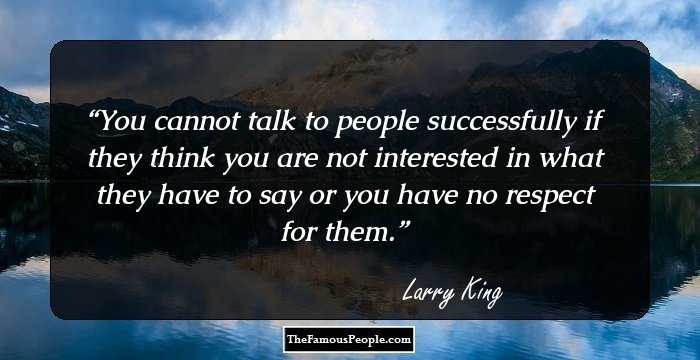 ‘Larry King Live’, hosted on CNN, had a successful run from 1985 to 2010. It is deemed as one of the longest running talk-show programs in American history, with a whopping total of one million viewers every night. This one-hour show was broadcast three times a day and could be seen by audiences all over the world on CNN International. Some of the notable episodes of the show included the debate between Ross Perot and Al Gore, the episode with Ryan Seacrest and the episode featuring the ailing Tammy Faye Messner. The success of the show was phenomenal and is still regarded as his biggest accomplishment.

Awards & Achievements
He was presented the Peabody Award for ‘Excellence in broadcasting’ for both radio and television shows, in 1982 and 1992 respectively.
In 1989, he was inducted into the ‘Radio Hall of Fame’.
Continue Reading Below

He won a total of 10 CableACE Awards for the categories, ‘Best Interviewer’ and ‘Best Talk Show Series’.

In 2009, he was presented the Golden Milk Award for ‘Lifetime Achievement’, by the Radio & Television News Association of Southern California.

He was the proud recipient of the President’s Award, honoring his impact on media from the Los Angeles Press Club, in 2006.

He won the Hugh Downs Award for ‘Communication Excellence’ from Arizona State University, in 2007. 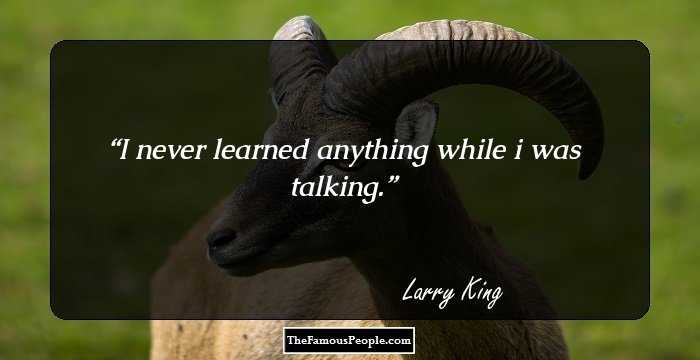 For most part of his early life, he was a fervent smoker. In 1987, he suffered from a major heart attack and went through a number of surgeries to correct his heart disease issue.

He authored two books about living with heart disease, titled, ‘Mr. King, You’re Having a Heart Attack: How a Heart Attack and Bypass Surgery Changed My Life’ and ‘Taking on Heart Disease: Famous Personalities Recall How They Triumphed over the Nation’s #1 Killer and How You Can, Too’.

Larry King died on 23 Jan 2021 at Cedars-Sinai Medical Center, Los Angeles, California, U.S. He was admitted to hospital in December 2020 after he tested positive for COVID-19.

In terms of religious views, Larry King never believed that he would be ‘going anywhere (heaven/hell)’ after he died.

Trivia
Larry King never prepared for any of his interviews because he believed that the audience would know very little about the interviewee and as a result, he preferred to ask basic questions to the interviewee to get to know them through the course of the show.
Recommended Lists:
Media Personalities #50
You May Like

See the events in life of Larry King in Chronological Order