Lauryn McClain is an American actress and singer. She is best known for her role in films like ‘Daddy’s Little Girls’ and ‘The Gospel’. She is a member of the popular rock band ‘McClain’. ‘McClain’, which is basically an all-girls pop and R&B band, was formed by Lauryn, along with her sisters, Sierra and China. The band launched its first studio album titled ‘Go’ in 2012. Lauryn was also a part of ‘A.N.T. Farm’, a children’s show, ‘Jimmy Kimmel Live’, a talk show and ‘Tyler Perry's House of Payne’, a sitcom. She worked in a film titled ‘Six Blocks Wide’ in 2008. Presently, Lauryn is working on the script of a sitcom which is scheduled to be aired soon. 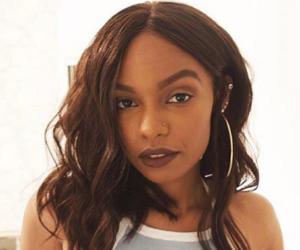 Hunter Schafer
Actresses #10015
Film & Theater Personalities #26208
DID WE MISS SOMEONE?
CLICK HERE AND TELL US
WE'LL MAKE SURE
THEY'RE HERE A.S.A.P
Quick Facts

American People
Georgia Actresses
American Actresses
Capricorn Actresses
Actresses Who Are In Their 20s
Personal Life
Lauryn McClain was born on January 9, 1997 in Decatur, Georgia, into a family of professional musicians.
Her father, Michael McClain, is a singer, song composer, producer and sound engineer. He has produced some noteworthy albums including Solange Knowles’ ‘Sky Away’. He is also the manager of ‘McClain’ band. Lauryn’s mother, Shontelle, is a singer and songwriter. ‘Gabesworld Music’, a music production company, founded by Lauryn’s parents is named after her brother Gabriel.
Continue Reading Below
You May Like

Famous Beautiful Women With Green Eyes
Career
Lauryn started her career at a very young age as she discovered her passion for singing and acting during her school days itself. Lauryn started performing for the musical band of her school and later became a regular member of the band.
Initially, Lauryn suffered from stage fright. Her feet would often turn cold right before any of her performances. In an attempt to overcome stage fright, she started learning guitar, hoping that the confidence that she might gain after learning to play guitar would overshadow her fear.
When Lauryn became proficient at playing the instrument, her older sister Sierra Aylina McClain came up with an idea of forming a rock band along with her sisters, Lauryn and China. In 2004, Sierra, Lauryn and China launched their band ‘3McClainGirls’. The band was later renamed as ‘McClain Sisters’ which was again changed to ‘McClain’.
Lauryn was cast in the 2005 film ‘The Gospel’, in which she played the role of Anne, a choir group member. The film was a modern day representation of one of the Parables of Jesus, Parable of the Prodigal Son. In 2006, she played a cameo role in the sitcom ‘Tyler Perry's House of Payne’, in which her sisters had recurring roles. Tyler, the creator of the show, was impressed by the acting skills of the McClain sisters and wanted to present them with more opportunities.
Tyler did exactly that by casting the McClain sisters in the 2007 film ‘Daddy’s Little Girls’. The film was about a loving and caring father of three daughters. Lauryn appeared in the film as Lauryn James. Unfortunately, the film tanked at the box office. The critics did appreciate the performances of the actors but criticized the style in which the film was made. Though Lauryn was cast as a child artist, she managed to attract the attention of other directors.
By now, Lauryn had grown into a confident stage performer. She then played Malia Obama, Barack Obama’s daughter, on one of the episodes of the sketch comedy show, ‘Jimmy Kimmel Live!’ She then appeared in a short film titled ‘Six Blocks Wide’ which released in 2008. Lauryn then took a break from acting and started focusing on polishing her acting and singing skills. She considers herself fortunate to have been mentored by singer and songwriter Avril Lavigne. Avril inspired Lauryn to express her thoughts through singing. She also encouraged her to write songs.
After three years of break, Lauryn returned to the screen to entertain the audience with her improved acting skills. She made her television debut with the 2011 show, ‘A.N.T. Farm’. The show featureschild prodigies who have made a name for themselves in the entertainment field at a very young age. In this series too, Lauryn appeared along with her sisters.
2012 turned out to be an important year for ‘McClain’ the band as it released its debut studio album. A single from the album ‘Go’ was launched on August 3, 2012. Lauryn’s wish of composing a song came true with this album. She also co-wrote the songs along with her sisters. The album was well-received by the critics and was even compared to the albums of stars like Rihanna and Jonas Brothers. The album became a turning point in Lauryn’s career as it helped her to establish herself as a singer.
In 2014, the band released its second single, ‘He Loves Me’. Its recent single ‘Rise’ is registered as the theme song of Disney nature’s show, ‘Chimpanzee’. The song will also be used as an anthem of ‘Disney’s Friends for Change’.
Lauryn is currently working on her script-writing skills. She will soon be coming up with a script for an upcoming sitcom.

See the events in life of Lauryn McClain in Chronological Order