Laura Linney, best known for portraying strong, but vulnerable characters, is one of the most celebrated American actors of our times. Born to a famous playwright father, but raised by a single mother, who earned her living as a nurse, she became interested in theatre while spending summers with her father, eventually studying acting, first at Brown University and then at Juilliard School. Beginning her career at the Broadway shortly after her graduation, she debuted in films within two years and on television in the year after. She has appeared in innumerable films, and television and stage productions since then. Throughout her career, she has received many awards, which include two Golden Globe Awards and four Primetime Emmy Awards as well as three Academy Award nominations and five Tony Award nominations.  However, in spite of the array of awards, theatre has remained her first love and she has continued to appear both on screen and on stage. Natalia Dyer
Actresses #596
Film & Theater Personalities #1379
Continue Reading Below
DID WE MISS SOMEONE?
CLICK HERE AND TELL US
WE'LL MAKE SURE
THEY'RE HERE A.S.A.P
Quick Facts

Laura Linney was born on February 5, 1964 in Manhattan, New York City, USA. Her father, Romulus Zachariah Linney IV, was a well-known playwright and novelist, while her mother, Miriam Anderson Perse née Leggett, was a nurse. Laura was their only child.

Her parents divorced in 1966 when Laura was just two years old.  Later, her father got married and from his second marriage she has a half-sister named Susan.

After her parents’ divorce, she was raised solely by her mother, who worked really hard so that Laura could have the best. The only bedroom of their small apartment was left to Laura while her mother slept on a pullout in the living room.

At the age of eleven, she was enrolled at the prestigious Northfield Mount Hermon School, located in Gill, Massachusetts. Also from this period, she started spending the summers with her father, developing a love for theatre, starting to work behind the scenes.

At the age of fourteen, she joined the New London Barn Playhouse, a nonprofit summer stock theater located in New Hampshire, sometime working 14 hours a day.  She also took part in school dramas, being praised for her performances.

In 1982, she graduated from Northfield Mount Hermon and entered Northwestern University in Illinois, where she studied for one year. Thereafter, she shifted to Brown University, where she studied acting with Jim Barnhill and John Emigh and served on the board of the university's student theater group.

In 1986, during her senior year at the Brown University, she appeared as Lady Ada Lovelace in Childe Byron. Written by his father, the play has been described by Romulus Linney as a personal attempt by a divorced father to speak to his daughter.

In 1986, she graduated from Brown University with a degree in theatre arts and entered Juilliard School to further her studies, eventually graduating in 1990. Sometime in-between, she also studied at the Arts Theatre School in Moscow. 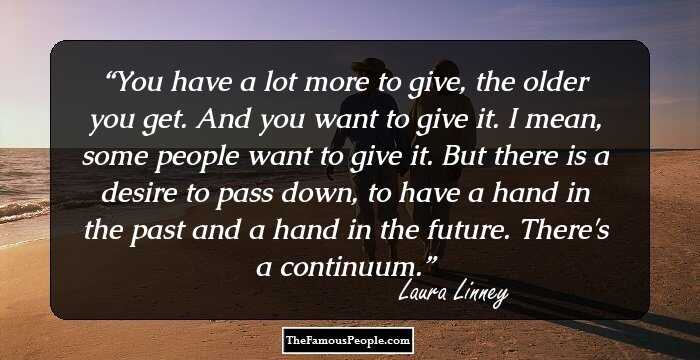 Immediately on graduating from Juilliard School, Laura Linney began her career at the Broadway, appearing as Tess in Six Degrees of Separation in 1990. Although her part was small, she was able to attract critical attention with her performance.

In 1992, she debuted in films, appearing as a young teacher in Lorenzo's Oil.  Concurrently, she continued to appear in Broadway productions like Sight Unseen and Seagull, receiving Theatre World Award for the former.

In 1993, she debuted on television, starring as Mary Ann Singleton in six episodes of the miniseries, Tales of the City. Also in the same year, she appeared in two TV movies, Class of ‘61 and Blind Spot, as well as in two feature films, Dave and Searching for Bobby Fischer.

In 1995, she received her first star role in a film, appearing as Karen Ross in Congo. However, she got her real breakthrough in 1996 when she appeared as Janet Venable in Primal Fear, starring in it opposite Richard Gere. Thereafter, there was no dearth of star roles for her.

Concurrently with playing star roles in films, she continued to appear on stage, playing Thea Elvsted in Henrik Ibsen’s Hedda Gabler (1994), as Linda Seton in Holiday (1995 -96) and as Claudia in Honour (1998). Her works on television include More Tales of the City (1998) and Love Letters (1999) 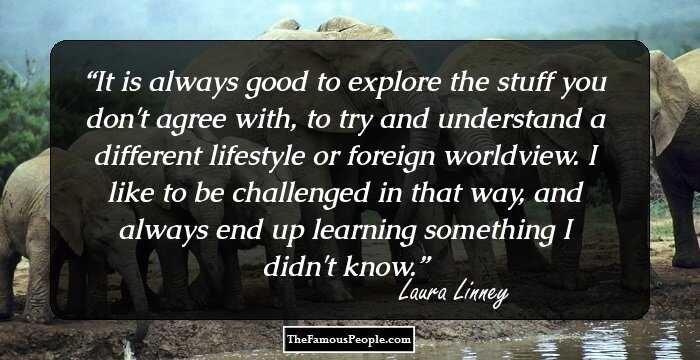 Quotes: Trying
In the New Millennium

In 2000, Laura Linney received her first Academy nomination for playing Sammy Prescott in You Can Count on Me.  Her second Academy nomination came in 2004, this time for her role of Clara McMillen in Kinsey. In-between, she starred in numerous other films like The Mothman Prophecies, Life of David Gale, Mystic River, Love Actually, P.S.

In 2005, she once again made her mark, portraying the role of a promising writer in The Squid and the Whale. In 2006, she earned her third Academy nomination for her role of Wendy Savage in The Savages. In-between she appeared several other films.

In 2008, she received critical accolade for her role of Abigail Adams in the award-winning HBO miniseries, John Adams. Also in the same year, she returned to the stage after a gap of four years, appearing as La Marquise de Merteuil in Les liaisons dangereuses.

In 2010, she once again appeared on stage, playing the role of Sarah Goodwin in Time Stands Still. Also from 2010 to 2013, she starred as Cathy Jamison in forty episodes of The Big C, concurrently serving as one of its executive producers.

Ozark, which ran from July 21, 2017 to April 29, 2022, was her next big work on television. She not only appeared in it in the main role of Wendy Byrde, but also served as co-executive producer and directed one episode in its fourth season.

All along, she continued to portray various roles on big screen, excelling as Margaret Suckley in Hyde Park on Hudson (2012), as housekeeper Mrs. Munro in Mr. Holmes (2015) and as Anne Sutton in Nocturnal Animals (2016). In 2017, she also received critical accolade for her role in The Dinner.

In 2020, after a gap of three years, she had her two films—Falling and The Roads Not Taken—released.  Meanwhile, she had continued to work on other medium, appearing as Mary Ann Singleton in nine episodes of Tales of the City, also starring in the Broadway adaption of My Name is Lucy Barton (2020).

Laura Linney is possibly best known for her flawless acting in the 2000 film, You Can Count on Me. Appearing in it in the role of Sammy Prescott, who not only has to deal with single parenthood, but also with a new boss and an aimless brother, she earned many awards and nominations 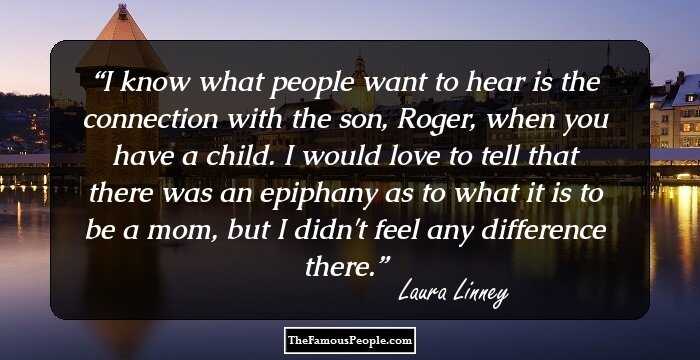 Laura Linney has received numerous awards and nominations throughout her career. They include four Primetime Emmy Awards, which she received for her roles in Wild Iris (2002), Fraiser (2004), John Adams (2008) and The Big C: Hereafter (2013).

On September 2, 1995, Laura Linney married actor David Adkins. However, the marriage ended in a divorce in 2000.

On May 2, 2009, she tied the knot for a second time, this time with Marc Schauer, a drug and alcohol counselor. The couple has a son, Bennett Armistead Schauer, born on January 8, 2014.

Quotes By Laura Linney | Quote Of The Day | Top 100 Quotes

See the events in life of Laura Linney in Chronological Order