Kristen Stewart is a famous Hollywood actor, best-known for her role as ‘Bella Swan’ in the blockbuster ‘Twilight’ series, which was inspired by Stephenie Meyer’s novel series of the same name. Her character, although dull and dreary, went on to amass a legion of fans that was also smitten by the vampire-human love saga. Contrary to her character in the film, Kristen Stewart is believed to be quite the opposite in real life. She has a penchant for humor, glamor, and leads an interesting, fast-paced life. After the final installment of the ‘Twilight’ film series released, she stopped hogging the limelight and the projects that were once dwarfed by ‘Twilight’ films began to resurface. Her prolific acting skills from a very young age went on to inspire a number of young girls and teenagers alike. Her acting career began when she was spotted by a talent scout and despite landing a small role in the Disney series ‘The Thirteenth Year,’ she made her presence felt with a stunning, non-verbal performance. She then went on to earn a number of roles in films like ‘The Safety of Objects,’ ‘Panic Room,’ ‘Cold Creek Manor,’ ‘Catch That Kid,’ ‘Undertow,’ ‘Into the Wild,’ ‘Snow White and the Huntsman,’ and ‘On the Road.’
Continue Reading Below American People
Twilight Cast
Actresses
American Women
California Actresses
Childhood & Early Life
Kristen Jaymes Stewart was born on 9 April 1990, in Los Angeles, California, to Jules Mann and John Stewart. She has an older brother named Cameron. Her father was a stage manager and television producer and her mother was a script supervisor.
Her family moved to Colorado, where they lived for several years before returning to Los Angeles. At the age of eight, she was noticed by a talent scout agent during a Christmas play, and offered her a non-speaking role in a Disney TV movie titled ‘The Thirteenth Year.’ Thus, her tryst with acting began.
In 2001, she played the role of ‘Sam Jennings’ in ‘The Safety of Objects.’ Shortly after the conclusion of this film, she landed a role as Jodie Foster’s on-screen daughter in ‘Panic Room,’ which released the following year. At the time, this was a great achievement as she had landed a role alongside one of the greatest stars of Hollywood at the age of 12.
After the success of ‘Panic Room,’ she was cast in a thriller movie titled ‘Cold Creek Manor,’ which released in 2003. Once again, she was lauded for her performance and was nominated for the ‘Young Artist Award.’
She studied in regular schools till seventh grade before dropping out. She then completed her high school education through long-distance learning. Since she started acting at a young age, long-distance learning allowed her to focus more on her acting career. 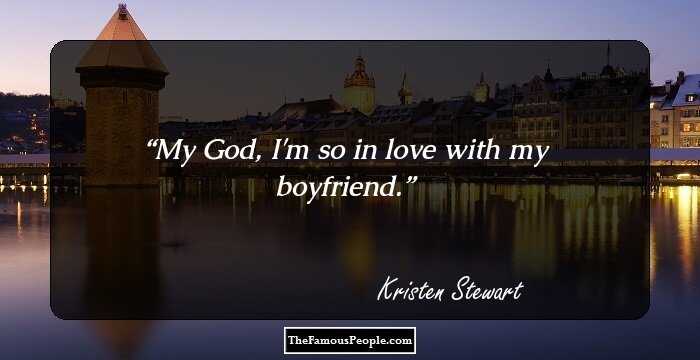 Who Is The Most Popular BTS Member?
Career
She starred in her breakthrough film ‘Catch That Kid’ in 2004, alongside Max Thieriot and Corbin Bleu. The same year, she was also seen in the thriller, ‘Undertow,’ where she played the role of ‘Lila.’
Apart from feature films, she also appeared in a television movie titled ‘Speak’ in 2004, which was based on a novel of the same name. The following year, she played the role of a teenage sister of two young boys in a film called ‘Zathura: A Space Adventure.’
In 2006, she was cast in Griffin Dunne’s film ‘Fierce People.’ Following the success of that film, she was offered the role of the protagonist in the supernatural film ‘The Messengers.’
Her next big project was ‘In the Land of Women,’ which released in 2007. The movie also starred Adam Brody and Meg Ryan. Though the movie received mixed reviews, her performance was lauded. The same year, she starred in a small role in the critically acclaimed biopic, ‘Into the Wild.’
At the end of 2007, ‘Summit Entertainment,’ a production house, announced that Stewart would be cast as the lead protagonist ‘Isabella Swan’ in the film adaptation of Stephenie Meyer’s best-selling fantasy series, ‘Twilight.’
‘Twilight,’ the first installment in the four-part movie series, was officially released around the world on November 21, 2008. Many critics felt that she was the ‘ideal’ choice for the role, thanks to her ‘wooden’ expressions. The next year, she appeared in the movie ‘Adventureland.’
In 2009, she also starred in the second installment of the ‘Twilight’ series, ‘New Moon’ which went on to become a bigger hit than the first film. The movie opened to one of the highest domestic and international opening weekends in the decade. However, her performance in the film received mixed reviews from critics.
In 2010, she appeared in ‘The Yellow Handkerchief,’ which opened at the ‘Sundance Film Festival’ two years earlier, but released in the US in 2010. She also played the role of a rock star in the film ‘The Runaways.’
2010 proved to be an extremely important year for Stewart. Not only did she star in the third installment of the ‘Twilight’ series ‘Eclipse,’ she also went on to star in ‘Welcome to the Rileys.’
Continue Reading Below
Her next big film and one of the most anticipated movies of her career was ‘The Twilight Saga: Breaking Dawn- Part I,’ which released on November 18, 2011. Although the film received negative reviews, Stewart was praised for her ‘intense’ performance. The second part of the film titled ‘The Twilight Saga: Breaking Dawn-Part II’ was released the following year.
In 2012, she also played the title role in ‘Snow White and the Huntsman,’ which did well at the box-office. The same year, she starred alongside Sam Riley and Amy Adams in ‘On the Road.’
Her next project ‘Clouds of Sils Maria’ was critically acclaimed. Her portrayal of ‘Valentine’ in the film won her many awards. In 2015, she starred in movies like ‘American Ultra’ and ‘Equals.’
2016 was a busy year for Stewart as she appeared in four films, namely ‘Certain Women,’ ‘Café Society,’ ‘Personal Shopper,’ and ‘Billy Lynn's Long Halftime Walk.’
In 2017, she made her directorial debut in the short film ‘Come Swim.’ The movie was premiered at the ‘Sundance Film Festival’ and received favorable reviews. She was next seen in the biographical drama ‘JT LeRoy’ and biographical thriller ‘Lizzie’ in 2018.
In 2019, she was cast to play the title role in the political thriller film ‘Seberg.’ Directed by Benedict Andrews, the film stars Jack O'Connell, Anthony Mackie, Margaret Qualley, and Colm Meaney in important roles. ‘Seberg’ had its world premiere on August 30, 2019, at the ‘Venice Film Festival.’ 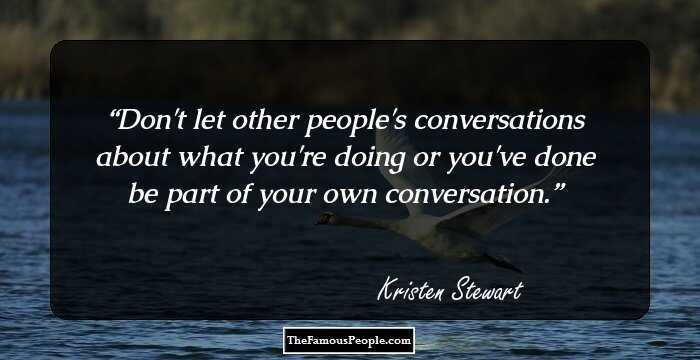 Major Works
Her major works include her portrayal of ‘Isabella Swan’ in the ‘Twilight’ film series. In the film series, she plays the love interest and later the wife of the lead character ‘Edward Cullen,’ a love-struck vampire. The ‘Twilight’ film franchise is based on Stephenie Meyer’s best-selling novels of the same name. Her role in the film series made her popular around the world.
Stewart’s portrayal of the diligent assistant ‘Valentine’ in the drama movie ‘Clouds of Sils Maria’ was praised all over the world. Her performance in the film earned her several awards, including the ‘César Award’ for ‘Best Supporting Actress.’ She became the first American female actor to even receive a ‘César Award’ nomination in 30 years.
Continue Reading Below
Awards & Achievements
In 2009, she won a ‘MTV Movie Award’ for ‘Best Female Performance’ for her role in ‘Twilight.’
She won a ‘Teen Choice Award’ for ‘Choice Movie Actress: Drama’ for ‘Twilight’ in 2009.
She was honored with an ‘Orange Rising Star Award’ by the ‘British Academy Film Association’ in 2010.
She won the ‘Kids’ Choice Award’ for ‘Cutest Couple-Taylor Lautner’ for her role in ‘The Twilight Saga: New Moon’ in 2010.
She won a ‘MTV Movie Award’ for ‘Best Female Performance’ for ‘The Twilight Saga: Eclipse’ in 2011.
She received a ‘People’s Choice Award’ nomination for ‘Favorite Face of Heroism’ for her role in ‘Snow White and the Huntsman’ in 2013. 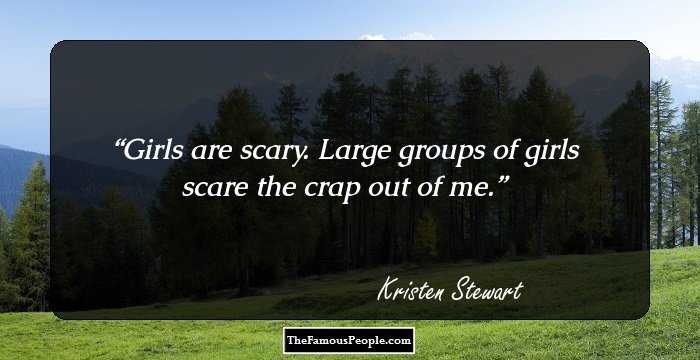 Quotes: Me
Personal Life & Legacy
Stewart was romantically linked with her ‘Twilight’ co-star Robert Pattinson since 2009. She then stated that she was in a relationship with Michael Angarano.
She confirmed her relationship with her co-star Pattinson in 2012 after the ‘US Weekly’ published photos of her cheating on him with director Rupert Sanders.
After dating several men, Stewart announced that she is bisexual. She also said that she has dated many women like French singer Soko, musician St.Vincent, and stylist Sara Dinkin.
She wishes to attend college in the future and pursue writing. The actress currently lives in Los Angeles.
Trivia
While preparing for her part in ‘Welcome to the Rileys,’ she decided to learn pole dance, deprived herself of sleep, and devoured junk food. As a result, she looked pale, blemished, and her legs were covered with bruises.

Quotes By Kristen Stewart | Quote Of The Day | Top 100 Quotes

See the events in life of Kristen Stewart in Chronological Order