Klay Alexander Thompson is an American professional basketball player, who plays for the ‘Golden State Warriors’ of the ‘NBA’ (National Basketball Association) league. The sport runs in Thompson’s blood. Born to a basketball champion father, he was introduced to the sport at an early age. Being a sportsperson herself, his mother also supported Thompson in his sporting endeavors. Before beginning his professional career, Thompson played college basketball for three seasons at ‘Washington State University,’ where he was a two-time first-team all-conference player in the ‘Pac-10 Conference.’ He was selected by the ‘Golden State Warriors’ in the first round of the 2011 ‘NBA’ draft as the 11th overall pick. Over the course of his career, Thompson has broken numerous records. He holds the ‘NBA’ regular season record for most points scored in a quarter and most three-pointers made in a single playoff. He also has the ‘NBA’ playoff record for most three-pointers made in a game. In 2015, he led the ‘Warriors’ to their first ‘NBA’ championship since 1975. With his fellow teammate Stephen Curry, he set a then-NBA record of 484 combined three-pointers in a season. American People
Tall Celebrities
Tall Male Celebrities
Male Sportspersons
American Sportspersons
Childhood & Early Life
Klay Alexander Thompson was born on February 8, 1990, in Los Angeles, California, USA, to Julie and Mychal Thompson. Both his parents were sportspersons – his mother a volleyball player, and his father a basketball player. His father was the first overall pick of the 1978 ‘NBA’ draft. He has two brothers, Mychel and Trayce.

When Thompson was two-years-old, the family shifted to Lake Oswego, Oregon. It was at Oregon that Thompson befriended Kevin Love, the future ‘NBA’ star. Twelve years later, his family moved to Ladera Ranch, California.

On the academic front, Thompson graduated from ‘Santa Margarita Catholic High School’ (SMCHS) in 2008. It was while in school that Thompson’s love for basketball blossomed. Such was his skill at the sport that he averaged 21 points per game during his senior year and led ‘SMCHS’ to a 30–5 record win and a ‘Division III State Championship’ appearance. 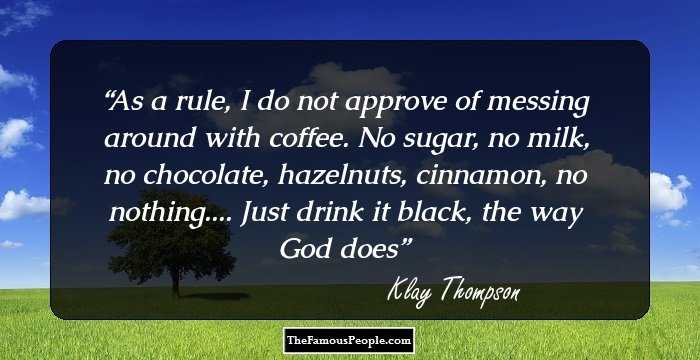 Continue Reading Below
Career
Klay Thompson played collegiate basketball at the ‘Washington State University’ (WSU) where he was named to the ‘Pac-10 All-Freshman Team’ and Collegehoops.net’s ‘All-Freshman Honorable Mention Team.’ He averaged 12.5 points per game.

In his sophomore year, Thompson led his team ‘Cougars’ to the ‘Great Alaska Shootout Championship.’ At the championship, he set several records – becoming the tournament’s ‘Most Outstanding Player’ after scoring a record 43 points in a single game, which was the third-highest single game point in ‘WSU’ history. He became the third-fastest ‘Cougar’ to reach 1,000 points. He was named to the ‘All-Pac-10 First Team’ and twice received the ‘Pac-10 Player of the Week’ honor. He finished the season with an average of 19.6 points.

Thompson’s early basketball career thrived as he kept on bettering his game. He won his second ‘All-Pac-10’ first team honors, becoming the third ‘Cougar’ to do so. What’s more, he became the first ‘Cougar’ to win ‘Pac-10 Player of the Week’ three times. In the 2011 ‘Pac-10’ tournament, he set a tournament record with 43 points and eight three-pointers. He finished the season with a record 733 points. Thompson became one of the all-time leading scorers in ‘WSU’ history.

Post the junior season, Klay Thompson opted to stay with the ‘NBA’ draft. He was selected as the 11th overall pick by the ‘Golden State Warriors.’ Subsequently, Thompson improved his skills in all areas, including points per game, shooting percentage, rebounds, assists, steals, and turnovers. He bettered his own record as he scored a season-high 27 points against ‘New Orleans Hornets.’ At the end of the season, he was mentioned in the ‘NBA All-Rookie First Team.’

He started the year 2013, on a happy note. He scored a season high 32 points against ‘Cleveland Cavaliers.’ Together with Stephen Curry, he formed the best shooting duo in ‘NBA’ history; the duo scored 483 three-pointers, the most ever by an ‘NBA’ duo. In May, Thompson recorded a playoff career-high 34 points against ‘San Antonio.’

In the 2013–14 season, Thompson broke his previous record of 34 points by scoring 38 points, including 5-of-7 three-pointers. He and Curry broke the ‘NBA’ record by scoring 484 points, bettering their own record. Thompson averaged 18.4 points, 3.1 rebounds, and 2.2 assists throughout the season.
On October 2014, Thompson signed a four-year contract extension with the ‘Warriors.’ On January 2015, he scored his then career-high 52 points, with 11 three-pointers, in a match against ‘Sacramento Kings.’ At the end of the month, he was named a reserve for the 2015 ‘Western Conference All-Star team.’
On March 2015, Thompson and Curry struck their career best, scoring 525 three-pointers, and surpassing their previous record by 41 points. The season proved to be magnanimous for the ‘Warriors’ as they went on to defeat ‘Cavaliers’ in six games to win the ‘NBA’ championship, thus ending the franchise's 40-year-old championship drought.
Thompson began the 2015–16 season averaging 17.2 points per game in his first 21 games. He then scored his season’s best 39 points against ‘Indiana Pacers.’ ‘The Warriors’ recorded a winning streak of 24 consecutive victories, which ended with a loss to ‘Milwaukee Bucks.’
Continue Reading Below
On January 2016, Thompson scored his season best 45 points against ‘Dallas Maverick.’ Simultaneously, he was named ‘Western Conference All-Star’ reserve for the 2016 ‘NBA All-Star Game,’ earning his second straight ‘All-Star’ nod. In March, Thompson scored two consecutive 40-pointers against ‘Dallas Mavericks’ and ‘Philadelphia 76ers’ for the first time in his career. Later on, he became the first player in ‘NBA’ history to score at least seven three-pointers in consecutive playoff games.
On December 5, 2016, Thompson created history by becoming the first player in ‘NBA’ history to score 60 points in less than 30 minutes. In the match against ‘Indiana Pacers,’ he scored 60 points in 29 minutes, which led to a 142-106 victory for his team. His outstanding performance earned him a place in the ‘Warrior’s Hall of Fame’ list, alongside players like Wilt Chamberlain, Rick Barry, and Joe Fulks. On July 1, 2019, he signed a five-year contract and agreed to stay with the ‘Warriors.’
Thompson was also a member of the ‘United States National Team’ that won the gold medal at the 2014 ‘FIBA Basketball World Cup’ and the 2016 ‘Rio Olympics.’ Prior to this, he was a member of the ‘Under-19 National Team’ that won the gold at the 2009 ‘FIBA Under-19 World Championship.’ 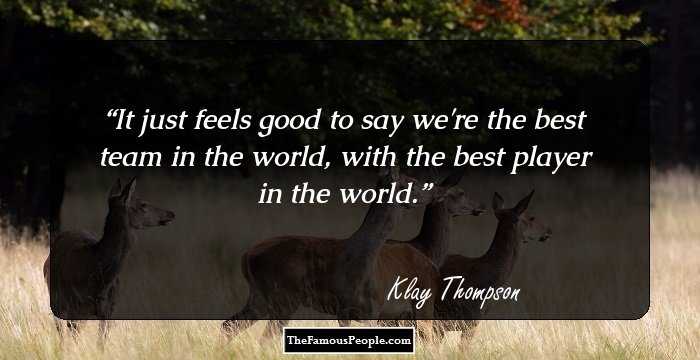 Awards & Achievements
In 2015, Klay Thompson led the ‘Warriors’ to their first ‘NBA Championship,’ thus ending the franchise's 40-year-old championship drought.
He was included thrice in the ‘NBA All-Star’ (2015–2017), and was part of the ‘All-NBA Third Team’ for 2015 and 2016.
He holds NBA’s record for most points scored in a quarter, most three-pointers scored in single playoffs, and most three-pointers scored in a game.
Personal Life
Thompson's older brother Mychel played in the ‘NBA’ for ‘Cleveland Cavaliers.’ His younger brother Trayce plays for the ‘Cleveland Indians’ in the ‘Major League Baseball’ (MLB).
In 2017, he donated $1,000 for every point he scored in his home games against ‘Detroit Pistons,’ ‘Toronto Raptors,’ and the ‘Washington Wizards,’ as part of his efforts to raise fund for relief for the ‘Northern California firestorm.’

From 2019 to 2020, Thompson was romantically linked to actress Laura Harrier.

Trivia
His 2015 ‘NBA’ championship victory made him and his father the fourth father-son duo to win ‘NBA’ titles as players.

See the events in life of Klay Thompson in Chronological Order