Advanced Search
Kevin Maurice Garnett is an American professional basketball player who started his glorious career in the sport with the NBA draft Minnesota Timberwolves. He was the only player since 1975 to be drafted directly out of high school. He played with the Timberwolves for the first 12 seasons of his basketball career, again a record set by him— the longest current tenure of any player in the NBA with one team. While he was with the Timberwolves, he led them to eight consecutive playoff appearances and to the Western Conference Finals. Garnett has been named to 15 All-Star Games, winning the All-Star MVP award in 2003, and is currently tied for 2nd-most All-Star selections in NBA history. He has been a nine-time member of the All-NBA Teams selection and a twelve-time member of the All-Defensive Teams selection. Garnett currently holds several unprecedented Timberwolves franchise records. After his long stint with the team, he was traded off to the Boston Celtics in a three-year $60 million contract extension deal. He helped the team win their first NBA championship since 1986, while also finishing third for the MVP award for himself. In 2013, he was traded off to Brooklyn Nets. American People
American Men
Tall Celebrities
Tall Male Celebrities
Male Sportspersons
Childhood & Early Life
Kevin Garnett was born in Greenville, South Carolina to Shirley Garnett and O’Lewis McCullough. His parents were never officially married and after he was born, his father left his mother. She did the sole job of bringing him up.
Garnett attended the Hillcrest Middle School and started exploring basketball for the first time there but it was at Mauldin High School that he started playing in the school team.
Although Garnett was doing well with basketball in the school but an unfortunate event took place and he got into a racially inflicted fight. He was arrested for second-degree lynching. All the charges were dropped but he decided to leave Mauldin.
He got transferred to Farragut Career Academy, Chicago, and he continued his senior year there. He did very well in basketball and was named National High School Player of the year by USA Today.
Around the same time, he was titled as the Most Outstanding Player and to mark the 35th anniversary of the McDonald’s All American High School Boys Basketball Game, he was honored as one of the 35 Greatest McDonald’s All Americans. 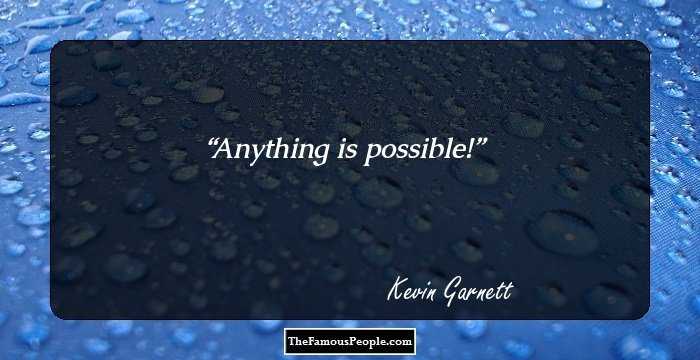 Continue Reading Below
Career
In 1995, Garnett was the first player to be drafted directly out of school by NBA Draft’s Minnesota Timberwolves. Timberwolves new head coach moved him into the startup line. Though not a superstar yet, he had a decent rookie year.
During the next season, 1996-97, Garnett showed improvement in his performance, which resulted in the better performance of the Timberwolves as well. He earned 17.0 points, 8.0 rebounds, 3.1 assists, 2.1 blocks and 1.7 steals in total.
1997-98 began with the contractual agreement between Timberwolves and Garnett to remain in association for another 6 years. He improved and earned 18.5 points, 9.6 rebounds, 4.2 assists, 1.8 blocks, and 1.7 steals per game.
In the next season, Garnett achieved solid success earning 20.8 points, 10.4 rebounds, 4.3 assists and 1.8 blocks per game, he was named to the All-NBA Third Team. His stardom started to take shape around this time.
In 1999-2000, too many controversies clouded the success of Timberwolves–– the free agent signing of Joe Smith was considered illegal by NBA. As a result the team was stripped off three first-round draft picks and the owner was fined.
Garnett kept showing improvement and in 2001-02 season he gathered 21.2 points, 12.1 rebounds, 5.2 assists, 1.6 blocks and 1.2 steals per game enough for another All-NBA Second Team nomination.
In 2003-04, Garnett now was not the only star of Timberwolves now, he was joined by players like Sprewell, Cassell, etc. With their assistance, he earned 24.2 points, 13.9 rebounds, 5.0 assists, 2.2 blocks and 1.5 steals.
Garnett was named to the All-NBA Second Team in 2004-05 but Timberwolves was not doing so well and the next season was a bigger disappointment as Timberwolves had to let go of Cassell and the team logged the second worst record since Garnett joined.
In 2007, Garnett was traded off to the Boston Celtics after being part of the Timberwolves for first 12 seasons of his basketball career. He had the longest current tenure of any player in the NBA with one team.
Continue Reading Below
Garnett made his Boston debut with a strong performance against the Washington Wizards in 2007-08, with 22 points and 20 rebounds.
He also led all players in voting for the 2008 NBA All-Star Game. Garnett received 2,399,148 votes, the sixth highest total in NBA All-Star balloting history.
In 2008, Garnett was named the NBA Defensive Player of the Year. It was the only major award a Celtic player had not claimed since the franchise's foundation in 1946. He was also third in MVP voting for the year.
He averaged 15.8 points 8.5 rebounds and 2.5 assists during 2008-09 and became the youngest player in NBA history to reach 1,000 career games. He also got his twelfth consecutive All-Star Game but suffered from knee injury.
Garnett was selected to play in the 2010 NBA All-Star Game, which was his 13th All-Star Game selection.
The 2010 Finals went to a decisive seventh game in LA, where the Celtics led well into the third quarter before the LA Lakers mounted a comeback and held on for the victory.
In the 2010–11 NBA season, Garnett and the Celtics started strong, winning 23 of their first 26 games but he injured his knee and had to miss two weeks.
When he returned, he averaged under 15 points, under 9 rebounds, and a career low 0.8 blocks per game.
Garnett agreed to a three-year contract extension with the Celtics worth an estimated $34 million in 2012. And the following year, it was announced that Garnett had been voted to start in the 2013 All-Star Game in Houston.
In 2013, the Celtics and Brooklyn Nets reached a deal to trade Garnett, Paul Pierce, and Jason Terry for future first-round picks in the 2014, 2016, and 2018 drafts. 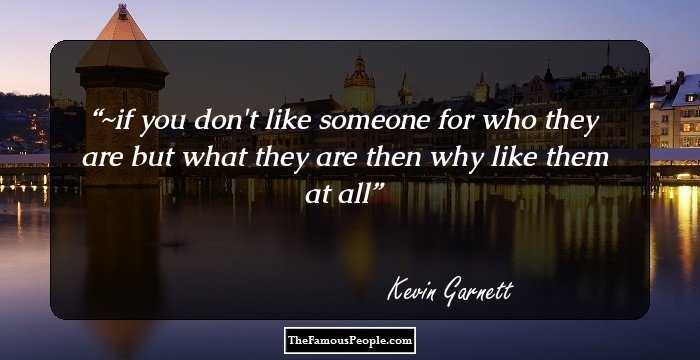 Quotes: You, Like
Awards & Achievements
He has set many NBA records - ‘Only player in NBA history to reach at least 25,000 points, 10,000 rebounds, 5,000 assists, 1,500 steals and 1,500 blocks in his career’, ‘Only player in NBA history to average at least 20 points, 10 rebounds and 5 assists per game for 6 consecutive seasons’, etc.
Other awards include: ‘NBA champion (2008)’, ‘Olympic gold medal (2000)’, ‘NBA Most Valuable Player (2004)’, ‘NBA Defensive Player of the Year (2008)’, ‘NBA All-Star Game MVP (2003)’, etc.
The most prominent achievement of Garnett’s basketball career is considered to be his 12 season long stint with the Minnesota Timberwolves, the NBA team that he started off with directly after school. He led the Timberwolves to eight-consecutive playoff appearances.
Personal Life & Legacy
In 2004, Garnett got officially married to his longtime girlfriend Brandi Padilla in California.
Trivia
In 1997, he signed a six-year contract extension with Minnesota Timberwolves that was worth an incomparable $126 million.

Quotes By Kevin Garnett | Quote Of The Day | Top 100 Quotes

See the events in life of Kevin Garnett in Chronological Order