Tomohisa Yamashita
DID WE MISS SOMEONE?
CLICK HERE AND TELL US
WE'LL MAKE SURE
THEY'RE HERE A.S.A.P
Quick Facts

Japanese People
Musicians
Japanese Men
Gemini Actors
Male Singers
Childhood & Early Life
Ninomiya was born in Katsushika, Tokyo, on June 17, 1983. His parents worked as chefs.
Nino has an elder sister. Being the only grandson in the family, Nino was announced to be the heir of their family’s windshield-wiper factory.
His entertainment career began when his cousin sent an application to ‘Johnny & Associates’ without intimating him. His application was accepted, and Nino soon auditioned and joined the talent agency.
He graduated from high school in March 2002. He was 18 years old at the time of his graduation.
Continue Reading Below
Career
Nino made his acting debut in 1997, with the play ‘Stand by Me,’ based on an American film. Interestingly, he did not perform in any play for the next seven years.
His next stage appearance was for ‘Shibuya Kara Tooku Hanarete’ in 2004. The play, directed by Yukio Ninagawa, had Nino in the lead role.
He portrayed ‘Jim Stark’ in the 2005 play ‘Rebel Without a Cause.’ He returned to stage in 2009, to play the lead in ‘Strangers on a Train,’ based on a novel of the same name. His role in the play was that of a psychopathic murderer named ‘Bruno.’ This has been his last stage appearance to date.
He made his TV debut with the TV movie ‘Amagi Goe’ (‘Crossing Mt. Amagi’) in 1998. He also made small appearances in shows such as ‘Nijuroku ya Mairi’ (1998), ‘Akimahende’ (1998), ‘Nekketsu Ren'ai-dō’ (1999), until he starred as the lead in the movie ‘Abunai Houkago’ (‘Dangerous After School’) in 1999.
The same year, he co-starred with the other members of his band in ‘V No Arashi,’ to show his support for the 8th ‘World Cup’ of ‘Volleyball Championships.’ From 2000 to 2003, he appeared in ‘Namida O Fuite,’ ‘Handoku!!!,’ and ‘Netsuretsu Teki Chuka Hanten,’ before playing the lead in the comedy series ‘Stand Up!!’
The 2004 drama ‘Minami-kun no Koibito’ (‘Minami’s Girlfriend’) featured him as ‘Susumu Minami.’ In the series, ‘Susumu’s girlfriend somehow shrinks to 16 cm. In 2005, he appeared as the lead character, ‘Takuro Wakui,’ in ‘Yasashii Jikan’ (‘Affectionate Time’). ‘Takuro’ ends up killing his mother and develops bad blood with his father.
In 2006, he starred in the drama ‘Sukoshi wa, Ongaeshi ga Dekitakana’ (‘Have I Returned a Bit of My Gratitude?’), which featured him as a young man diagnosed with Ewing’s sarcoma. It was based on a true story. In 2007, he played a poor student, ‘Tarō Yamada,’ in comedy drama ‘Yamada Tarō Monogatari.’
In 2008, he again took the lead in ‘Ryūsei no Kizuna,’ which featured him as ‘Kōichi Ariake,’ a man whose parents had been murdered by an unknown man years ago. His performance was critically praised and even earned him various awards and honors.
From 2009 to 2011,he starred in dramas such as ‘Door to Door,’ ‘Tengoku de Kimi ni Aetara,’ ‘Freeter, le o Kau ,’ and ‘Freeter, le o Kau SP.’ ‘Door to Door’ and ‘Ryūsei no Kizuna’ got him a number of awards.
Continue Reading Below
From 2012 to 2015, he continued starring in series such as ‘Kuruma Isu de Boku wa Sora wo Tobu,’ ‘Yowakutemo Katemasu,’ ‘Murder on the Orient Express,’ and ‘Aka Medaka.’ In 2016, he starred in ‘Botchan,’ a TV special.
His latest TV role was that of ‘Seishiro Tokai’ for the 2018 series ‘Black Pean.’
Nino made his film debut with the 2002 movie ‘Pikanchi Life is Hard Dakedo Happy.’ However, he played his first lead role in the 2003 film ‘The Blue Night,’ which featured him as ‘Shuichi,’ a high-school student trying to get rid of his abusive father.
In 2006, he made his big Hollywood debut in Clint Eastwood’s ‘Letters from Iwo Jima,’ in which he played a soldier named ‘Saigo,’ a performance that was highly appreciated by critics. The movie also won an ‘Academy Award.’
He made his debut as a voice artist in the animated film ‘Tekkon Kinkreet.’ His next lead role was in ‘Ōoku’ in 2002.
Thereafter, he starred in various films, such as ‘Gantz’ and ‘Gantz: Perfect Answer’ in 2011, ‘Platinum Data’ in 2013, ‘Nagasaki: Memories of My Son’ in 2015, and ‘The Last Recipe’ in 2017.
He lent his voice to the character ‘Koro-sensei’ in the 2015 film ‘Assassination Classroom’ and its sequel, ‘Assassination Classroom: Graduation,’ in 2016. His latest film appearance was in the 2018 film ‘Killing for the Prosecution.’
Nino made his singing debut as the member of Japanese boy band ‘Arashi’ in 1999. The band has sold millions of copies of their albums.
Nino wrote the lyrics for songs such as ‘Konseki,’ ‘Fight Song,’ ‘Niji,’ and ‘Gimmick Game,’ and other songs from the various ‘Arashi’ albums.
Continue Reading Below
Other Major Works
Ninomiya is also a radio host. His own radio show, ‘Bay Storm,’ began airing in October 2002.
Awards & Achievements
Ninomiyo has won various awards and honors during his career. In 2001, he won the ‘Nikkan Sports Drama Grand Prix (Fall)’ award for the ‘Best Supporting Actor’ for ‘Handoku!!!’
In 2003, he won the ‘Nikkan Sports Drama Grand Prix’ (Winter)’ award for the ‘Best Supporting Actor’ for his performance in ‘Netsuretsu Teki Chuka Hanten.’
In 2004, he won the ‘Rendora 110 Award’ for the ‘Best Actor’ for his role in ‘Stand Up!!’ In 2007, he won the ‘Japan Broadcast Film Arts Award’ for the ‘Best Actor’ for ‘Haikei, Chichiue-sama.’
He also won ‘Hōsō Kojin Award’ at the 62nd ‘Cultural Affairs Award’ ceremony, for ‘Marathon.’ In 2008, he won the ‘Best Actor Award’ for ‘Ryūsei no Kizuna’ at the 59th ‘Television Drama Academy Awards.’
He was also nominated for the ‘Outstanding Actor (Drama)’ award at the 49th ‘Monte-Carlo Television Festival.’ In 2011, he won the ‘Best Actor Award’ at the 67th ‘Television Drama Academy Awards,’ for ‘Freeter, le o Kau.’
In 2016, Ninomiya won the 39th ‘Japan Academy Prize’ for the ‘Best Actor’ for his performance in ‘Haha to Kuraseba’ (‘Living with My Mother’).
Personal Life

Throughout his career, Nino has been linked with various women. He is said to have dated Shiina Noriko in 2000, Nagasawa Masami in 2005, Mizukawa Asami in 2010, and Sasaki Nozomi in 2011.

He married announcer Ayako Ito in 2019. The couple was blessed with a daughter in 2021.

See the events in life of Kazunari Ninomiya in Chronological Order 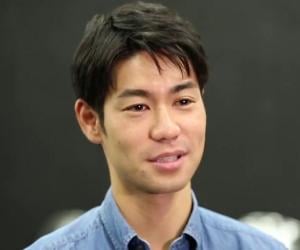