(Conservative Commentator Known for Her Work at ‘Townhall.com’, ‘Townhall Magazine', and ‘Fox News’)

Katie Pavlich is an American journalist, author, blogger, podcaster, and conservative commentator. Born and raised in Arizona, Katie attended the ‘Sinagua High School’ and later joined the ‘University of Arizona’ to earn a degree in broadcast journalism. Soon after graduating college, she began working at ‘Townhall’ magazine, as a contributing editor. She also served as a news editor for ‘Townhall.com,’ the magazine’s online portal. She also worked at ‘Fox News.’ In 2013, she was hired by ‘Fox’ to work as an alternative co-host on the panel talk-show titled ‘The Five.’ She has also been active on radio shows for leading portals such as ‘CNN,’ ‘MSNBC,’ and ‘Fox Business.’ She also co-runs a podcast named ‘Everything’s Going to Be All Right.’ She is a conservative and has expressed her right-wing beliefs on many forums. In 2013, she was named the ‘Blogger of the Year’ by the ‘Conservative Political Action Conference.’ In 2014, she was named the ‘Woman of the Year’ by the ‘Clare Boothe Luce Policy Institute.’ She was also given the ‘Conservative Leadership Award’ by the same institute. Elise Jordan
DID WE MISS SOMEONE?
CLICK HERE AND TELL US
WE'LL MAKE SURE
THEY'RE HERE A.S.A.P
Quick Facts 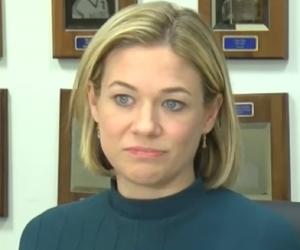 American People
American Women
Women Journalists
American Journalists
Women Media Personalities
Childhood & Early Life
Katie Pavlich was born Catherine Merri Pavlich, on July 10, 1988, in Arizona, US. She is of Irish, German, Croatian, and Australian descent. She was the older child in the family of two children and grew up with her younger brother.
Her grandfather, John Pavlich, fought as part of the American side in the Second World War. He met Katie’s grandmother during the war and got married to her. Some of the conservative and pro-America beliefs that Katie holds originates from her family history.
Growing up in Arizona, she became heavily interested in outdoor activities such as mountain climbing, river rafting, and hunting. She was a proud American ever since she was a kid.
She enrolled at the ‘Sinagua High School,’ where she played outdoor sports such as basketball and volleyball. She had made up her mind about being a journalist while she was in high school.
Following her high-school graduation in 2006, she joined the ‘University of Arizona’ and pursued a bachelor’s degree in broadcast journalism, graduating in 2010. Due to her history of patriotism, she qualified to join ‘Daughters of the American Revolution,’ an organization for women whose families had a history of fighting in the American War of Independence.
Continue Reading Below
Career
Following her graduation from the ‘University of Arizona,’ she moved to Washington, DC, and pursued a career in active journalism. She started working at ‘Townhall.com,’ a popular American conservative website. The website featured about 80 columns, mostly written by journalists working at ‘Fox News.’ Katie worked as a news editor for the website.
In addition, she also became a contributing editor of ‘Townhall’ magazine, the print version of ‘Townhall.com.’ She also contributed to ‘Fox News,’ aiming to earn a bigger position at the news agency.
Her big break arrived in 2013, when she was hired as an alternate co-host for the ‘Fox’ panel talk-show ‘The Five.’ Although she never became a regular host on the show, she did her job remarkably well, earning good feedback from the management. The show featured five ‘Fox’ personalities discussing and debating on news, current affairs, and controversies. At its peak, it was one of the most-watched ‘Fox’ shows.
She also worked as a ‘Washington Fellow’ on ‘National Review,’ a semi-monthly editorial magazine.
Katie has also been part of many local and national radio shows on platforms such as ‘MSNBC,’ ‘CNN,’ ‘Fox Business,’ and ‘CNBC.’
In 2013, she covered the ‘ATF Gunwalking Scandal,’ known more popularly as the ‘Fast and Furious Scandal.’ The tactic was run by Arizona authorities. They sold firearms to illegal straw buyers to track them back to Mexico, in order to catch the Mexican drug cartel lords and arrest them. It turned out to be one of the most talked-about scandals of the recent years.
Her brave work in exposing the scandal earned Katie the 2013 ‘Blogger of the Year Award’ at the ‘Conservative Political Action Conference’ (CPAC).
In 2014, she was named the ‘Woman of the Year’ by the ‘Clare Boothe Luce Policy Institute.’ In 2013, she was also given the ‘Conservative Leadership Award’ by the same organization.
She has been known to be actively unsupportive of former president Barack Obama’s liberal policies. Following her work on the ‘Fast and Furious’ scandal, she wrote a book titled ‘Fast and Furious: Barack Obama’s Bloodiest Scandal and Its Shameless Cover-Up.’ The book, which was published in 2012, accused Barack Obama of risking the lives of many Americans.
In 2014, she wrote another book, ‘Assault & Flattery: The Truth about the Left and Their War on Women.’ She landed blows on the American left liberals through her book. Both her books became bestsellers.
Since 2018, she has been running a podcast titled ‘Everything’s Going to be All Right,’ in association with former ‘White House’ press secretary Sean Spicer.
Political Leanings
Katie Palvich has never been adamant about her support for right-wing conservative leaders, such as President Donald Trump. When Trump was accused of being racist and anti-feminist, she declared on debate shows that it was a planned attack by the left liberal media to bring him down. She further added that the media could not digest Trump’s rise as the president.
In contrast, and in accordance with her right-wing ideologies, she had been an active critic of Barack Obama.
Family & Personal Life
Katie Palvish dated Israeli resident Gavy Friedson for a few years before getting married to him in 2017. Gavy works in an NGO.
Katie is active on social media and regularly uploads pictures with her husband.

See the events in life of Katie Pavlich in Chronological Order