Kathy Bates is one of the celebrated American actors of the film fraternity and theatre groups. Bates love for acting was discovered when she was in high school, participating in the school dramas. The feel-at-home feeling on-stage led her to think about the artistic genre seriously as she took up a course in drama and theatre in college. Very soon, she opted to be a part of the glitzy world professionally. Despite being sumptuously talented and skilled, Bates career took off with a slow start. In the beginning of her acting career, she took up minor roles in films and television series. She did not give up on her love for theatre and did a couple of shows. After about 20 years of being in the entertainment industry, Kathy Bates struck it big with the film, ‘Misery’ which opened the roads of success. She won an Academy Award for her outstanding performance. She followed this up with several successful and hit blockbusters such as ‘Fried Green Tomatoes’, ‘Dolores Caliborne’, ‘Titanic’, ‘Primary Colors’, ‘About Schmidt’, ‘P.S. I Love You’ and so on. She made guest appearances in several television miniseries. Furthermore, she has even donned the hat of a director for a couple of television shows. American People
American Women
Tennessee Actresses
Southern Methodist University
Cancer Actresses
Childhood & Early Life
Kathy Bates was born as Kathleen Doyle ‘Kathy’ Bates to Bertye Kathleen and Langdon Doyle Bates. While her mother was a homemaker, her father was employed as a mechanical engineer. She was the youngest of the three daughters born to the couple.
She completed her formal education from White Station High School. It was while at school that she discovered her hidden talent and affinity for acting. With an aim to make a career out of her talent, she enrolled at the Southern Methodist University.
She graduated from the university in 1969 majoring in theatre and drama. At university, she was a prominent member of the Alpha Delta Pi sorority 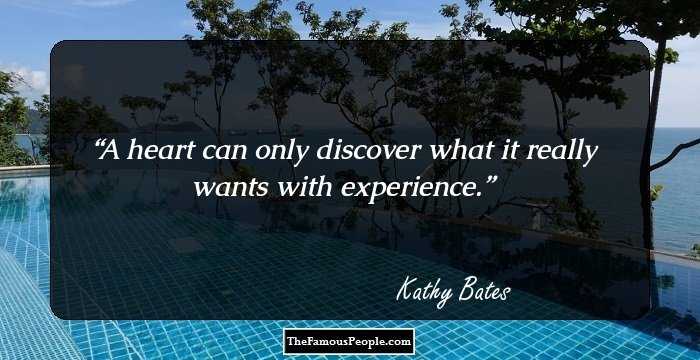 Quotes: Experience, Heart
Continue Reading Below
You May Like

The Hottest Male Celebrities With The Best Abs
Career
Completing her education, she moved to New York to pursue a career in acting. Meanwhile, she took up odd jobs in the city to survive a living. From working as a singing waiter in a famous resort to working as a cashier at the New York’s museum, she did not shy away from menial works.
She first secured a role for herself opposite Christopher Walken at Buffalo's Studio Arena Theatre in Lanford Wilson's world premiere of ‘Lemon Sky’. However, to her dismay, the show relocated to New York’s off-Broadway Playhouse Theatre without her.
Not the one to be disheartened quickly, she did not give up. By the mid-1970s, she gained a name for herself and a rising popularity among the New York’s regional theatre scene by some exceptional performance in shows like, ‘Casserole’ and ‘A Quality of Mercy’.
Meanwhile, she made a foray into the big screen with the film ‘Taking Off’. However, she was wrongly credited as Bobo Bates.
Continuing in theatre, it was her performance as Joanne in the theatre show, ‘Vanities’ that proclaimed her to fame. The show highlighted her acting prowess and immense talent as a performer.
She earned her first Broadway performance for the 1980’s show, ‘Goodbye Fidel’. Lasting only six performances, she followed this up by taking up a replacement role in the well-established and highly-successful drama, ‘Fifth of July’ in 1981.
She starred opposite Karen Black and Cher in the Robert Altman directed theatrical release, ‘Come Back to the Five and Dime, Jimmy Dean, Jimmy Dean’. The success of the drama led to a release of a film version of the same in 1982. The film earned her, her first big screen success, as audience now recognized and noticed her.
In 1983, she starred in the Pulitzer-prize winning play, ‘Night, Mother’ opposite Anne Pitoniak. The show earned her, her first Tony Award. She followed this up by ‘Off Broadway’ and Terrence McNally's ‘Frankie and Johnny in the Clair de Lune’, the latter of which ran for 533 performances.
In 1988, she succeeded Amy Irving in the off-Broadway production of ‘The Road to Mecca’. Despite having a super successful theatre career, the big screen fame eluded her. She failed to receive offers to portray her award-winning stage characters on the screen.
Continue Reading Below
Eventually, in 1990, luck smiled on her and she bagged the role of an obsessed fan Annie Wilkes, who kidnaps her favorite author and subjects him to a series of horrific tortures, in the film, ‘Misery’. Her exceptional performance and panache for acting not only won her critical acclaim and popularity, but the prestigious academy Award as well.
Other films released for the year include, ‘Dick Tracy’, ‘Men Don’t Leave’, ‘White Palace’ and so on. She followed these up by the 1991 acclaimed movie, ‘Fried Green Tomatoes’ in which she starred along with Jessica Tandy. In the film, she played the character of Evelyn Couch.
In 1992, she reprises her theatre role in the film version of the play, ‘The Road to Mecca’. Other films released during this time include, ‘Prelude to a Kiss’, ‘Used People’, ‘A Home of Our Own’, ‘North’, Curse of the Starving Class’ and so on.
In 1995, she played the titular character of Dolores Claiborne in the film-adaptation of the Stephen King novel, ‘Dolores Claiborne’. Her performance in the film was much appreciated.
While most of her films did well at the box office, the exceptional blockbuster performance seemed quite illusive. It was then that she played the character of Molly Brown in the James Cameron's flick, ‘Titanic’, which was based on the sinking of the RMS Titanic of 1912. The film broke all records, chronicling a humongous US$1.8 billion and more at the box office.
Taking the success story forward, she played the character of an acid-tongued political advisor Libby Holden in the film, ‘Primary Colors’. Adapted from a book in which political journalist Joe Klein gave an account of his experiences on the Presidential campaign trail, the film was a major success and earned her a nomination at the Academy Awards.
Towards the end of the 1990s and beginning of the 2000 decade, she came up with several films such as ‘The Waterboy’, ‘A Civil Action’, ‘Bruno’, ‘American Outlaws’, ‘Dragonfly’ and ‘Love Liza’. She even did several television films like, ‘Annie’ and ‘My Sister’s Keeper’ and short films like ‘Baby Steps’.
In 2002, she starred in the film, ‘About Schmidt’ for which she gained her third Academy Award nomination. In the film, she was cast opposite Jack Nicholas. Following this, she was a part of the star cast of a number of movies such as ‘Around the World in 80 Days’, ‘Unconditional Love’, ‘Failure to Launch, and ‘Relative Strangers’.
Meanwhile, she did several uncredited roles and played various characters in short films, documentaries, television films and miniseries and so on. She gave her voice to a couple of animation films like, ‘Bee Movie’, ‘Charlotte’s Web’, ‘The Golden Compass’ and ‘Christmas is Here Again’.
Continue Reading Below
Other than acting, she diversified her established and highly successful career by wearing the cap of the director for several television series such as ‘Homicide: Life on the Street’, ‘NYPD Blue’, ‘Oz’, ‘Six Feet Under’, and ‘Everwood’. She even went on to direct television films like, ‘Dash and Lilly’ and ‘Ambulance Girl’.
From 2010 to 2011, she took up a recurring role in the popular comedy series, ‘The Office’. Subsequently, she starred in the legal drama, ‘Henry’s Law’ which lasted for two seasons. She played the character of writer Gertrude Stein in Woody Allen’s ‘Midnight in Paris’.
In 2012, she made a guest appearance in the show, ‘Two and A Half Men’ on the episode ‘Why We Gave Up Women’ as the ghost of Charlie Harper. The role went on to earn her, her first Emmy Award for Outstanding Guest Actress in a Comedy Series, after nine nominations.
In 2013, she starred in the third season of the American Horror Story series' Coven as Delphine LaLaurie, an immortal racist. 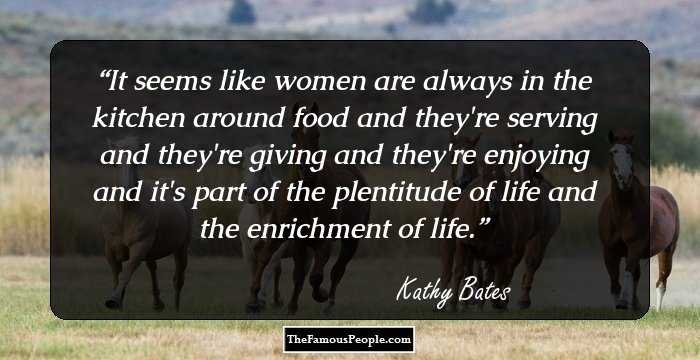 Quotes: Life, Like, Women
Awards & Achievements
In her four and a half decades of career, she has won numerous prestigious awards in various categories. Some of the prominent awards won by her include, Academy Award, Golden Globe Awards, Screen Actors Guild Awards, Blockbuster Entertainment Awards, American Comedy Awards, Primetime Emmy Awards and so on.
Other than acting and directing, she chairs the Executive Committee Chair of the Actors Branch of the Academy of Motion Picture Arts and Sciences Board of Governors.
Personal Life & Legacy
In 2003, she was diagnosed with ovarian cancer which she successfully overcame. In 2012, she underwent double mastectomy to treat breast cancer which she was diagnosed with in July 2012.
Trivia
She is the first woman ever to win an Oscar for Best Actress in a Horror/Thriller for her role in the film ‘Misery’.

See the events in life of Kathy Bates in Chronological Order