Advanced Search
Mary Kathleen Turner, better known as Kathleen Turner, is a film and stage actress who rose to prominence during the 1980s with her perfect combination of beauty, intelligence, grace and talents. Before embarking on a successful career in Hollywood she had been an active participant in the theatre and had received Tony Award nominations for her Broadway roles in ‘Cat On a Hot Tin Roof’ and ‘Who’s Afraid of Virginia Woolf?’ A career in acting seemed a very unlikely choice for the young woman who hailed from a conservative family. Both her parents, especially her father was strictly opposed to the thought of his daughter entering this field. However, family pressure could not deter the feisty lady from following her heart. She studied theater at the University of Maryland Baltimore County (UMBC), and acted in several stage productions by Steve Yeager. Then she started doing television before making her movie debut in ‘Body Heat’ as a cunning woman who plans to get her husband killed. Her raw sexuality and adventurous streak made her an instant favourite with the industry experts. As an actress she is famous for taking up unconventional roles in films like ‘Serial Mom’, ‘Peggy Sue got Married’ and ‘Prizzi’s Honor’. Unfortunately health problems limited her career growth later on. American People
Voice Actresses
American Women
Missouri Actresses
Gemini Actresses
Childhood & Early Life
She was born to Allen Richard Turner and his wife Patsy. Her father was a U.S. Foreign Service officer. The family traveled all over the world because of her father’s profession. She was raised in a conservative Christian household.
She was interested in the performing arts from a young age though her parents were opposed to it. She graduated from the American School in London in 1972 and then moved back to the U.S.
She attended Missouri State University for two years and then studied theater at the University of Maryland Baltimore County (UMBC). She earned her Bachelor of Fine Arts degree in 1977. During her college years she frequently appeared in several stage productions directed by Steve Yeager. 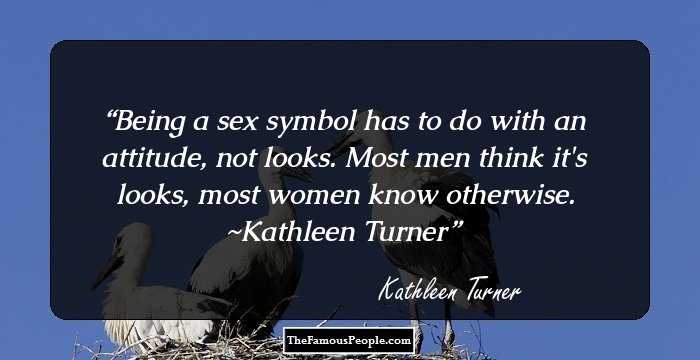 Quotes: Think, Women
Continue Reading Below
Career
She moved to New York in 1977 and started acting as the female lead in Michael Zetter’s play ‘Mister T’ at the Soho Repertory Theatre, making her off-Broadway debut. She made her Broadway debut as Judith Hastings in ‘Gemini’ at The Little Theatre after a few months.
Her film debut came in 1981 when she was chosen to play the role of the femme fatale Matty Walker in the thriller ‘Body Heat’. Her role of a cunning and beautiful woman who plots her husband’s murder was loved by all.
Not wishing to be stereotyped as a sexy seductress after her debut, she made a conscious choice to choose a variety of roles. She played a gold-digging wife in the science fiction comedy ‘The Man with Two Brains’ in 1983.
She chose to play a comedic role in the 1984 romantic comedy ‘Romancing the Stone’ directed by Robert Zemeckis. It also starred Michael Douglas and Danny DeVito. It was a big commercial hit and catapulted Turner to stardom.
She played a middle aged married woman who finds herself transported back to her high school days in the comedy drama ‘Peggy Sue Got Married’ in 1986. She was nominated for the Academy Award for the Best Actress for this role.
She again appeared with Michael Douglas and Danny DeVito in the black comedy ‘The War of the Roses’ in 1989. The film tells the story of a wealthy couple with a seemingly perfect marriage who find themselves on the verge of divorce over some issues.
She was a much sought after actress throughout the 1980s. Unfortunately she began suffering form rheumatoid arthritis in the 1990s which seriously restricted her career. She also took to heavy drinking during this time which further sabotaged her professional life.
After appearing in a few forgettable films during the early 1990s, she found moderate success with the role of Beverly Sutphin in the black comedy ‘Serial Mom’ in 1994 in which she played a seemingly perfect housewife who turns a serial killer and becomes a celebrity because of her notoriety.
Unable to find leading roles during the late 1990s, she appeared in supporting roles in films like ‘A Simple Wish’ (1997), ‘The Real Blond’ (1997), ‘The Virgin Suicides’ (1999). She also lent her voice to an episode of ‘The Simpsons’.
Continue Reading Below
Her health improved during the 2000s and so did her career. She appeared in a Broadway production of ‘The Graduate’ in 2002. The play was staged to sold-out crowds for as long as Turner was part of the cast.
In 2005, she appeared in a Broadway revival of ‘Who’s Afraid of Virginia Woolf?’ She played Martha in the play, a role that was highly appreciated and nominated for the Tony Award for Best Actress in a Play.
More recently she has appeared in minor roles in movies like ‘Marley & Me’ (2008), and ‘The Perfect family’ (2011). 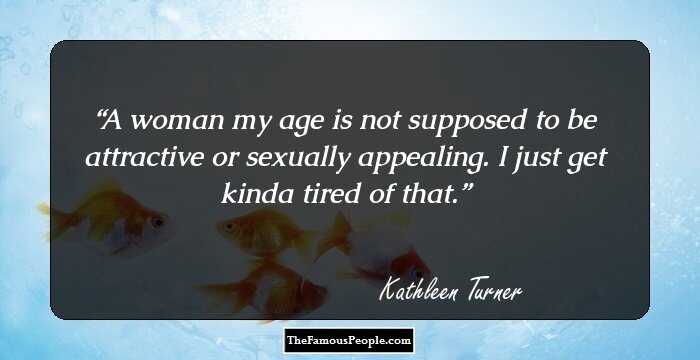 Major Works
She played Joan Wilder in ‘Romancing the Stone’ which was a romantic comedy that launched her to stardom. She played a lonely romance novelist whose sister is kidnapped by smugglers. This was her first venture into comedy.
She effortlessly played the role of a middle aged woman who is transported back to her high school days in the comedy drama ‘Peggy Sue Got Married’ for which she received an Academy Award nomination and won several other awards.
Awards & Achievements
She won the Golden Globe Award for Best Actress-Motion Picture for Comedy for her role of Joan Wilder in ‘Romancing the Stone’ (1984). She also won the Los Angeles Film Critics Association Award for Best Actress for this role.
She was presented with the Golden Globe Award for Best Actress – Motion Picture Musical or Comedy and the Sant Jordi Award for Best Foreign Actress for ‘Prizzi’s Honor’ (1985). 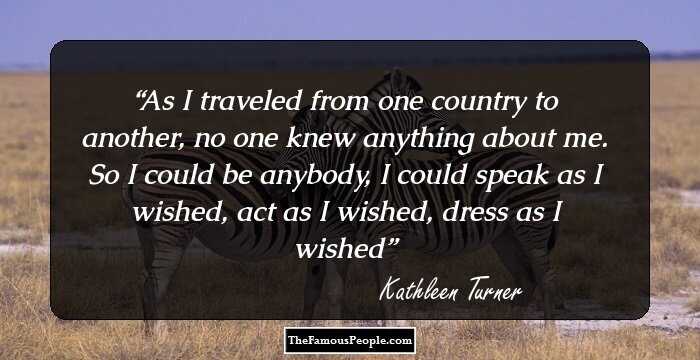 Personal Life & Legacy
She was once married to the real estate entrepreneur Jay Weiss whom she wed in 1984. She has one daughter. Weiss and Turner divorced in 2007.
She has been involved with Planned Parenthood of America from her teenage and later became a chairperson. She also volunteers for other charities like Amnesty International and Citymeals-on-Wheels.

Quotes By Kathleen Turner | Quote Of The Day | Top 100 Quotes

See the events in life of Kathleen Turner in Chronological Order