Johnny Cash was one of the most prominent American singer-songwriters of the 20th century. Although he was known for his country music, his large gamut of work went on to influence genres like rock and roll, blues, folk, gospel and rockabilly. He is best-remembered for his deep, baritone voice and his meek demeanor, notwithstanding his fame and success which was rife. He earned the nickname, ‘The Man in Black’, because he would always wear dark clothing while performing live and sang songs that were based on ‘dark’ themes, echoing his troubled past and other themes of pathos, lust, oddity, misfortune and redemption. Some of his well-known works include, ‘I Walk the Line’, ‘Ring of Fire’, ‘Man in Black’, ‘Jackson’, ‘Hey, Porter’, ‘Rock Island Line’ and ‘A Boy Named Sue’. His typical trooping bass songs have influenced the likes of Waylon Jennings, Bono and Bob Dylan. He started his career by recording gospel music and ended it by doing covers for more modern artists such as ‘Nine Inch Nails’. Cause of Death: Diabetic Complications

American Celebrities
Country Singers
Lyricists & Songwriters
American Men
Arkansas Musicians
Childhood & Early Life
Johnny R. Cash was the fourth of the seven children born to Carrie Cloveree and Ray Cash in Kingsland, Arkansas. When he was just three years old, the family shifted to Dyess, Arkansas.
From a very young age, he helped his family by working in cotton fields. He came from a poor family and ‘The Great Depression’ caused further financial troubles for the family. Many of these troubles would later be reflected in his songs.
Cash was extremely close to his elder brother Jack, who died after almost being cut into two when he was pulled into a rotating head saw in the mill, in 1944. His brother was only 15-years-old at the time. This depression added on to his woes in his childhood, which can also be seen in a number of his songs in later life.
He was mainly inspired by gospel and Irish music and began writing songs at the age of 12. It was around this time he learnt to play the guitar and was given a chance to perform in the local radio station.
In 1950, he enlisted in the United States Air Force, where he was allotted the job of a Morse Code Intercept Operator. During his time with the army, he and a few of his Air Force friends formed the ‘Landsberg Barbarians’, where he wrote the famous song, ‘Folsom Prison Blues’.
He was nobly discharged from service on July 3, 1954 as Staff Sergeant and he went back home to Texas. 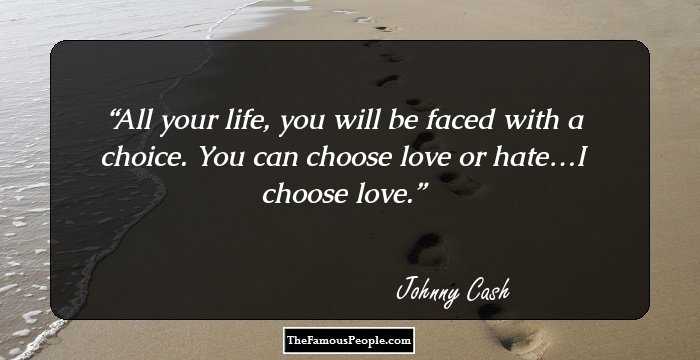 Quotes: You, Life, Love, Will
Continue Reading Below
You May Like

Who Is The Greatest Female Warrior In History?
Career
After his marriage, he worked for a brief period as an appliance salesman. He got together with a few mechanics and formed a tight music group called ‘Johnny Cash and the Tennessee Two’. They mainly played a fusion of country and blues music.
They approached Sun Records studio to record their gospel music, but Sam Phillips, the record producer asked them to come up with non-gospel music because he believed that the market for gospel music was very ‘limited’.
He finally convinced Philips which resulted in the release of the songs, ‘Hey, Porter’ and ‘Cry! Cry! Cry!’ in 1955. Other hits followed including, ‘Folsom Prison Blues’ and ‘So Doggone Lonesome’.
He tasted true fame with his song ‘I Walk The Line’, which became an instant success on music charts, in 1956. The following year, Cash became the first artist to record a ‘long-playing album’ and became one of the highest-selling artists with Sun Records.
In 1958, he signed a profitable deal with Columbia Records, where his single, ‘Don’t Take Your Guns to Town’ peaked at all major music charts and also entered the pop charts.
In the 60s, he starred in the ephemeral television series, ‘Rainbow Quest’ and was also seen in the movie, ‘Five minutes to Live’. Through the 60s, he took the country by storm with a fusillade of popular hits including, ‘Ring of Fire’ and ‘Understand Your Man’.
His career began to spiral downwards when he began to drink excessively and also started taking drugs.
Around this time, he also separated from his first wife. When he remarried, his life took an extraordinary U-turn in 1968, with the release of the live album, ‘Johnny Cash at Folsom Prison’.
In 1969, he hosted ‘The Johnny Cash Show’, a variety series on the ABC Network, which showcased contemporary musicians ranging from Bob Dylan to Kenny Rogers.
Continue Reading Below
By the 70s, he had cemented his image as ‘The Man in Black’ as he would frequently dress in black, wearing a long black knee-length coat. In 1971, he wrote a song, ‘Man in Black’ explaining his queer choice of clothing.
In the mid-70s, his popularity began to wane. In 1973, he released the double album, ‘The Gospel Road’ - the name was used in a Hollywood film of the same name.
In 1975, his autobiography, ‘Man in Black’ was published, which was the first of the two autobiographies he would write in his lifetime. Through the remainder part of the 70s, he appeared on television, hosting annual Christmas specials and also appeared in shows like ‘Columbo: Swan Song’, ‘Little House on the Prairie’ and ‘Dr.Quinn, Medicine Woman’.
In the 80s, he toured with Willie Nelson, Waylon Jennings and Kris Kirstofferson, recording three hit albums with the group. The first, titled, ‘Highwaymen’ was released in 1985. During this period, he also appeared in ‘The Pride of Jesse Hallam’ and the ‘Muppet Show’.
In 1986, he quit Columbia Records and reunited with Sun Studios in Memphis and created the album, ‘Class of 55’. The same year, he authored his only novel, ‘Man in White’.
The second album, ‘Highwaymen 2’ was released in 1990. Four years later, he recorded his album, ‘American Recordings’, which is largely considered one of his greatest works.
He concluded his group ‘Highwaymen’ series with the third and final album titled ‘Highwaymen- The Road Goes on Forever’, in 1995. The following year, he released the album, ‘Unchained’, which also went on to become one of his last hit albums.
In 1997, he wrote the second installment of his autobiography series titled, ‘Cash: The Autobiography’, which covered details of his life that were not mentioned in the former publication.
In 2000, he released ‘American III: Solitary Man’. One of his more somber albums ‘American IV: The Man Comes Around’, was released two years later and received popular acclaim.
Continue Reading Below
In the last stage of his career, Jihnny Cash covered songs by several late 20th-century rock artists; some of the notable songs among them include "Hurt" by Nine Inch Nails and "Rusty Cage" by Soundgarden. 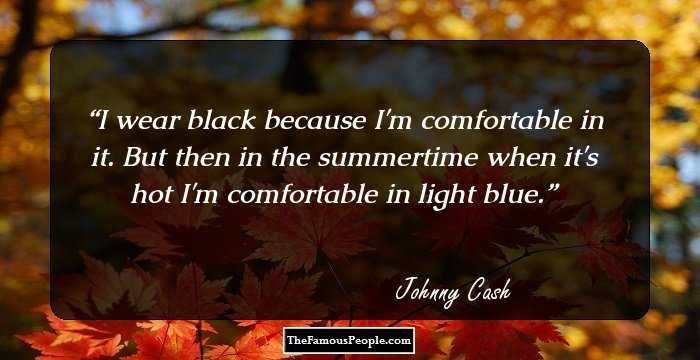 Quotes: I
Major Works
In 1973, he released ‘The Gospel Road’ under Columbia Records. The album was ranked one of the best 12 Country albums of the year and went on to spawn a film of the same name which Cash provided the narration to and the soundtrack.
‘American Recordings’ released in 1994, is believed to be one of his greatest albums till date. It is included in the list of the ‘500 greatest albums of all time’ by Rolling Stone magazine. The album was hailed by critics as one of his best works since the 60s. It also went on to win a Grammy Award for ‘Best Contemporary Folk Album’ at the Grammy Awards ceremony the same year.
Awards & Achievements
He won 19 Grammy Awards, including posthumous awards.
In 1969, he was presented the Country Music Association Award for ‘Entertainer of the Year’.
He was inducted into the Country Music Hall of Fame and Museum, in 1980.
He won the Academy of Country Music Award for ‘Single of the Year’ for ‘Highwayman’, in 1985.
In 1988, he was presented the Academy of Achievement Golden Plate Award.
Continue Reading Below
In 1992, he was inducted into the Rock and Roll Hall of Fame.
In 1999, he received the ‘Grammy Lifetime Achievement Award’.
In 2003, he won the Americana Music Association Award for ‘Album of the Year’ for ‘American IV: The Man Comes Around’.
In 2011, he was inducted into the Gospel Music Hall of Fame, posthumously. 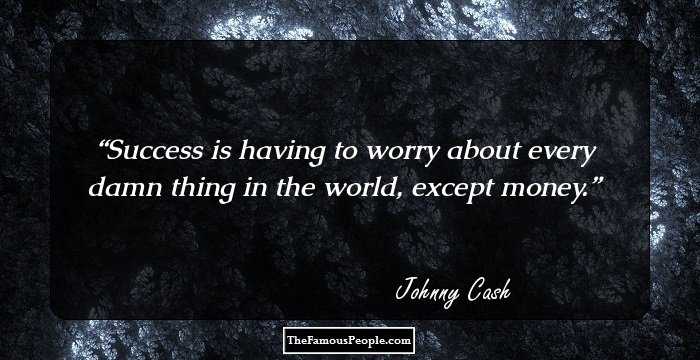 Quotes: Money
Personal Life & Legacy
He married Vivian Liberto in 1954 and they had four daughters - Rosanne, Kathy, Cindy and Tara.
He had a number of affairs with women and became a chronic alcoholic and a drug addict which finally ended his marriage with his first wife. He filed for divorce in 1966.
He married June Carter on March 1, 1968 and they had a son together; John Carter Cash.
He was diagnosed with neurodegenerative disease Shy-Drager syndrome in his final years. In 1998, he was even hospitalized for severe pneumonia which affected his lungs.
He passed away at the age of 73 due to problems arising from diabetes. His conditioned worsened towards the end because he was shattered after his wife’s death, who died four months before him. He was interred next to her in Hendersonville.
His image as a popular alternative country icon influenced a number of artists even after his death including Chris Isaak, Bob Dylan, Wyclef Jean, Willie Nelson and Dom DeLuise.
There is a street in Hendersonville, Tennessee, named after him. The Johnny Cash Museum is also located in the same place.
In 2007, the Johnny Cash Flower Pickin’ Festival took place in Starkville.
He has also been portrayed in a number of films including ‘I Still Miss Someone’ and ‘Walk the Line’.
In 2013, a limited edition Forever stamp was released in his honor, depicting a picture of him.
Trivia
In 1965, this famous American singer-songwriter burnt 508 acres of the Los Padres National Forest in California after his truck caught fire. He became the only person ever prosecuted by the government for beginning a forest fire.

Grammy Awards
Recommended Lists:
Musicians #343
Singers #35
You May Like

Quotes By Johnny Cash | Quote Of The Day | Top 100 Quotes

See the events in life of Johnny Cash in Chronological Order