Joan Alexandra Molinsky, better known by her stage name, Joan Rivers, was an American actress, comedian, writer, producer, playwright, screenwriter, film director, columnist, lecturer, radio host, jewelry designer and TV-host. As a young girl she worked at a number of jobs before trying her hand at acting. After appearing in numerous small plays she took up stand-up comedy. She became a known face throughout America after appearing as a guest on 'The Tonight Show' which was hosted by her mentor Johnny Carson. With the new found popularity she went onto make guest appearances in many talk shows and released chart-topping comedy albums. In 1986, she became the first woman to host a late night network television show called 'The Late Show with Joan Rivers'. The show's timings clashed with the timings of Carson's show which embittered her former mentor who never spoke to her again. In the last years of her career, she mostly conducted comedic interviews of celebrities walking on the red carpet at award shows. Throughout her career her comic style remained rather controversial as she'd often use satirical and scathing words to make fun of herself and other celebrities. She also wrote 12 best-selling memoir and humor books Cause of Death: Brain Damage

American Celebrities
Jewish Comedians
Actresses
Stand-up Comedians
American Women
Childhood & Early Life
Joan Rivers was born on June 8, 1933, in Brooklyn, New York to Russian Jewish immigrants Beatrice and Meyer C Molinsky. Joan had an elder sister, Barbara Waxler who passed away in 2013.
Joan received her education from Brooklyn Ethical Culture School and the Adelphi Academy. After her family moving to Larchmont, she attended Connecticut College and graduated from Barnard College in 1954 with a BA in English literature and anthropology.
Before entering show business she worked as a buyer for a chain store, a tour guide at Rockefeller center, proofreader in an advertising agency and as a fashion consultant.
On her agent, Tony Rivers' advise she adopted her stage name - Joan Rivers. 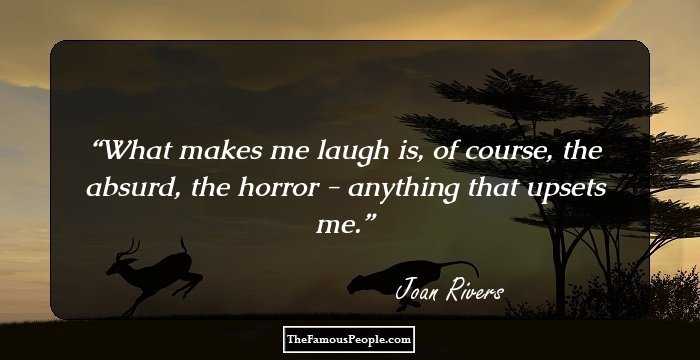 Quotes: Me
Continue Reading Below
Career
In the 1960s Rivers performed at many comedy clubs in the Greenwich Village. Her big break came when she appeared on ‘The Tonight Show with Johnny Carson’ in 1965. Eventually she got her own talk-show 'That Show with Joan Rivers' in 1969.
In the 1970s, she appeared on comedy show 'The Carol Burnett Show' and the game show 'Hollywood Squares'. She wrote a black comedy movie titled 'The Girl Most Likely to...', directed the film 'Rabbit Test' and performed the opening acts for the singers Helen Reddy, Robert Goulet, Mac Davis and Sergio Franchi at the Las Vegas strip.
By 1983, she had become a regular guest host of 'The Tonight Show' and also hosted the April 9, 1983 episode of 'Saturday Night Live'. Around this time, she also released a comedy album titled 'What becomes a Semi-Legend Most?' The album was a huge hit and attained No. 22 on the US Billboard 200.
In 1986, FOX TV Network announced the launch of 'The Late Show with Joan Rivers'. The show timings clashed with that of Johnny Carson’s show but Rivers did not tell him anything about the show. Carson never talked to her again.
A new TV talk show 'The Joan Rivers Show' came out in 1989 and ran for five years. It won her the Daytime Emmy for Outstanding Talk Show in 1990.
In 1994, she co-wrote and starred in the play 'Sally Marr... and Her Escorts' which was about Lenny Bruce's mother, an established stand-up comedian herself. Rivers was nominated for a Tony Award for Best Actress in a Play for the role.
She made regular appearances on Howard Stern's radio show and The Shopping Channel where she promoted her own line of jewelry, The Joan Rivers Collection.
The 2005 wedding of Prince Charles (Prince of Wales) and Camilla Parker Bowles saw only four Americans in the guest list; Rivers was one of the esteemed ones.
In 2008, she appeared on the show 'Big Brother: Celebrity Hijack' as one of the 20 hijackers. The same year she also appeared on the NBC-show 'Celebrity Feud' with her daughter Melissa.
Continue Reading Below
In 2009, she became the special 'pink-carpet' presenter for the Sydney Gay and Lesbian Mardi Gras parade. She was roasted in the Comedy Central Special roast aired on August 9, 2009.
The TV show 'Joan and Melissa: Joan Knows Best?' premiered on January 25, 2011 on WE TV. It chronicled their lives as they worked on their careers, took care of the family and balanced their social circles. It concluded on May 4, 2014 after four seasons. 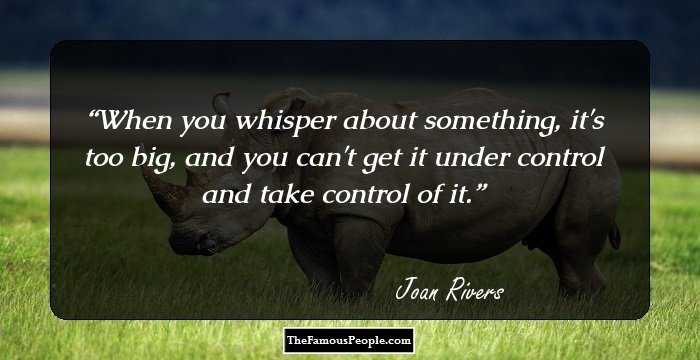 Quotes: You
Awards & Achievements
Joan Rivers received a star on the Hollywood Walk of Fame in 1989.
She won the Daytime Emmy Award for Outstanding Talk Show Host for ‘The Joan Rivers Show’ in 1990.
She won a Grammy Award for Best Spoken Word Album for 'Diary of a Mad Diva' in 2015.
Personal Life & Legacy
Joan Rivers married James Sanger, the son of a Bond Clothing Stores manager, in 1955. When she found out that he was not interested in having children, she got the marriage annulled in six months.
She married Edgar Rosenberg in 1965 and they had a daughter named Melissa. Edgar committed suicide in 1987 and Rivers later confessed that their 22-year marriage was a 'total sham' and that she had had several extra-marital affairs.
Several times her cheeky and in-your-face humor landed her in trouble. Her jokes on Adele's weight, the Holocaust and Ariel Castro kidnappings received stern and strong criticism, but she refused to apologize as these were jokes and nothing more.
Rivers had several cosmetic surgeries and was a patient of the famous plastic surgeon Steven Hoefflin.
Following a minor surgery in August 2014, she had a cardiac arrest and was placed in a medically induced coma. Joan Rivers never woke up from the coma and passed away on September 4, 2014. 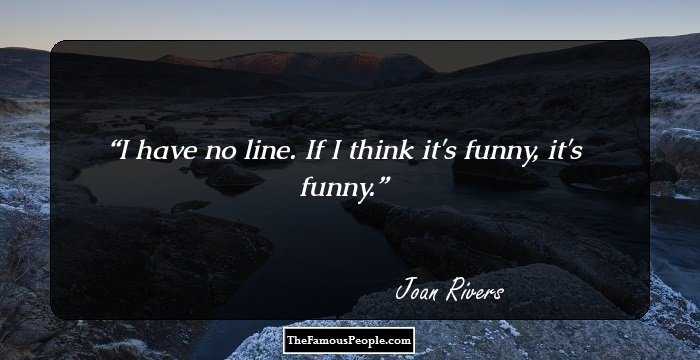 Quotes: Think
Trivia
She was a philanthropist who supported the Elton John AIDS Foundation. The City of San Diego called her their 'Joan of Arc' because of her philanthropic work regarding HIV/AIDS.
She helped several NGOs and generously donated to Jewish charities, animal welfare efforts, and suicide prevention causes

Quotes By Joan Rivers | Quote Of The Day | Top 100 Quotes

See the events in life of Joan Rivers in Chronological Order