(Comedian and a Cast Member of "The Ben Stiller Show," "The Larry Sanders Show," and "Saturday Night Live.")

Advanced Search
Janeane is one of the biggest names in the stand-up comedy showbiz. She developed an interest in comedy at a very young age, drawing inspiration from ‘Late Night with David Letterman’ for her drollness. After graduating from high school, she entered a comedy contest and did a number of odd jobs before setting foot in the world of entertainment. Like many comedians/ennes, her childhood was one of ‘struggles’ and as every story goes, she had to work from one pole to another to make ends meet. Her humor, which is characterized as dark, atypical and politically ‘correct’, has made her stand out from the rest, for which she has received extremely positive reviews. She has grown to become a cult figure, venting her frustrations on live television shows and voicing her opinions on issues pertaining to everything from food to relationships and scandalous office affairs. Apart from her career as a comedienne, she also did a brief stint as an actress and appeared in ‘Romy and Michele’s High School Reunion’ and ‘Mystery Men’. She is a regular at New York City’s local comedy scene. American People
Stand-up Comedians
American Women
New Jersey Actresses
Libra Actresses
Childhood & Early Life
Janeane Garofalo was born in Newton, New Jersey, to Joan and Carmine Garofalo. She was raised a conservative Catholic and is of Irish-Italian descent. As a result of her father’s job, she grew up in different places including Ontario, New Jersey and Texas.
Garofalo was a history student at Providence College, where her interest for comedy shows began. Her interest towards comedy islargely attributed to her watching, ‘Late Nights with David Letterman’. Soon enough, she entered a local comedy contest and won the title of the ‘Funniest Person in Rhode Island’.
Upon graduating from college and with the hope that she would appear on David Letterman’s show someday, she decided to pursue stand-up comedy. Since her family was not very well-off, she struggled to make ends meet and did a number of jobs from a bike messenger to waitress and a temp secretary. 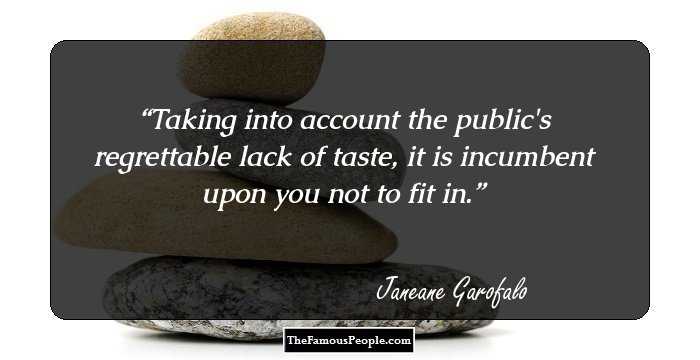 Quotes: You
Continue Reading Below
Career
She finally began her career in stand-up comedy in the late 1980s, during the pre-grunge era, which presaged thick glasses, frayed hair and tattoo sleeves. She made use of the ‘moment’ and realized that she was successful if she made fun of popular culture and deprecated her image to garner more attention.
In the early 1990s, after she gathered a cult following, she became a regular at the comedy scene in Los Angeles and New York City. However, her big break came in 1990 after a chance meeting with Ben Stiller and her appearance on the ‘Ben Stiller Show’, which was aired on fox in 1992.
She got her breakthrough in films in 1994, when she was cast in ‘Reality Bites’ as ‘Vickie’, Winona Ryder’s best friend. She then starred in the critically acclaimed, film ‘The Truth About Cats & Dogs’, in 1996.
Her acting skills were soon recognized and she was offered the role of ‘Paula’ on ‘The Larry Sanders Show’ on HBO, which earned her two Emmy Award nominations in 1996 and 1997, respectively.
In the period from 2000 to 2003, she appeared in many guest star roles in shows like ‘Seinfeld’, ‘Mad about You’, ‘Newsradio’ and ‘TV Nation’.
In 2004, she became the co-host for a show on Air America Radio, ‘The Majority Report’, along with Sam Seder.
In 2005, she appeared in the hit television series, ‘The West Wing’, as Louise Thornton. The following year, she lent her voice for the animated character, ‘Bearded Clam’ for Comedy Central’s ‘Freak Show’’.
In 2007, she provided her voice for the role of ‘Colette’ in the Pixar/Disney animated film, ‘Ratatouille’. She also did cameos for ‘The Guitar’ and ‘Labor Pains’ which were released in 2008 and 2009 respectively.
In 2009, she was cast as ‘Janis Gold’ for the Fox Network series, ‘24’. The next year, she did a three-hour stand-up special, ‘If You Will’, at the Moore’s Theater in Seattle, which was aired on Epix in June 2010. The same show was released on DVD in September 2010.
Apart from parallel careers as stand-up comedienne and actress, she is also a famous political activist and has voiced her opinion on a number of issues pertaining to the ‘Code Pink’ anti-war march and the 2003 Iraq War. She has appeared on a number of news channels like Fox News and CNN to discuss her views alongside famous personalities like Billy O’Reilly and Brian Kilmeade. 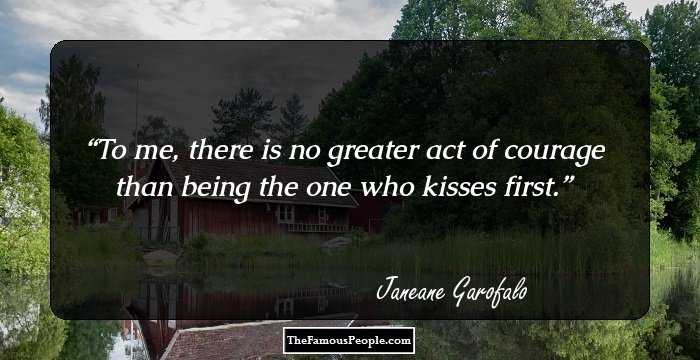 Quotes: Me
Major Works
She joined ‘The Larry Sanders Show’ in 1992 and played the much-appreciated role of ‘Paula’. This is considered to be her most important work because it honed her brusque and witty persona, earning her critical acclaim as well as two Emmy Award nominations in 1996 and 1997.
Personal Life & Legacy
She married Robert Cohen in Las Vegas, in 1991. The marriage, however, ended in divorce in 2012.
She has claimed publicly on a stand-up show, that she was asexual and that it was of ‘no good’ for her boyfriend. She also claims to be an atheist.
She also underwent a breast reduction surgery due to back problems. 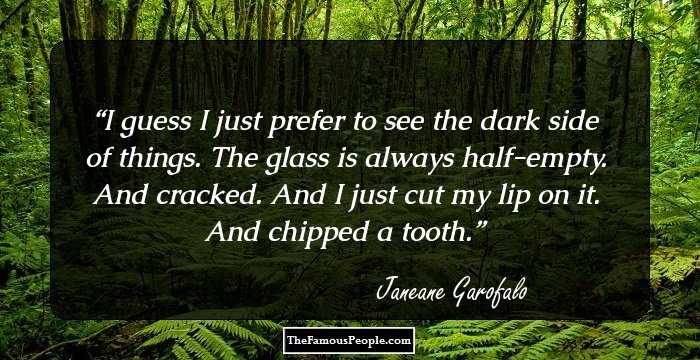 Quotes: I
Trivia
This stand up comedienne is barely five feet tall and often has to stand on a box during her live stand-up performances.

Quotes By Janeane Garofalo | Quote Of The Day | Top 100 Quotes

See the events in life of Janeane Garofalo in Chronological Order