Jane Therese Curtin is an American actress quite famously referred to as the ‘‘Queen of the Deadpan’’. She has an enthralling personality and has a unique way of connecting with the viewers through her acting. She was drawn towards dramatics in her teenage years and decided to pursue acting as her career. Initially she landed a role in NBC’s ‘Saturday Night Live’ and became very popular for her portrayal of various characters on the show; she also became a co-host of the show. Later she appeared in numerous sitcoms and Broadway musicals including the sitcom ‘Kate & Allie’, which won her Emmy Award twice. Her quirky display of dry humor made her viewer’s favorite and earned her the sobriquet ‘Queen of the Deadpan’. She also captivated the audience with her equally remarkable display of other emotions in her performances. Her musicals have received a positive acclaim, critically as well as commercially, with wide appreciation of her acting. She has been entertaining people all around the world through her simple yet engrossing performances on various platforms of entertainment and continues to do so. American People
American Women
Massachusetts Actresses
Northeastern University
Virgo Actresses
Childhood & Early Life
She was born on September 6, 1947 in Cambridge, Massachusetts to John Joseph Curtin and Mary Constance, owners of an insurance agency and was raised as a Roman Catholic.
She was the only daughter among the three children in her family. She had an older brother, John J. “Jack” Curtin, who died in 2008 and a younger brother, Larry Curtin, who lives in Florida.
She received her early education at a catholic school, Convent of Sacred Heart, and graduated from Elmhurst Academy in Rhode Island in 1965. Then she got a two year associate degree from the Elizabeth Seton Junior College, New York City. After that, she got enrolled at Northeastern University in Boston but left it in 1968. 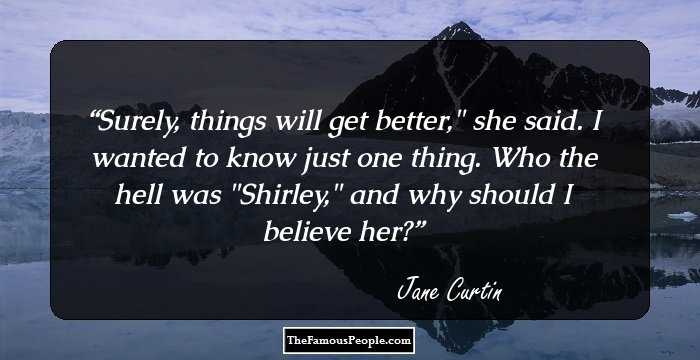 Quotes: Will, Believe, I
Continue Reading Below
You May Like

The Hottest Male Celebrities With The Best Abs
Career
In 1968, she landed an acting job at a comedy show in Cambridge, ‘The Proposition’, at $40 a week. She gained a vast amount of experience working alongside fine actors such as Fred Grandy and Josh Mostel from 1968 to 1972.
In 1974, she co-wrote and starred in the off-Broadway play, ‘Pretzels’, along with Fred Grandy, John Forster and Judith Kahan.
In 1974, she was offered part in two comedy shows simultaneously. She was offered a role in ABC’s ‘Saturday Night Live with Howard Cosell’, which featured guest stars, and another part in ‘NBC’s Saturday Night Live’, which featured young unknown faces of comedy. She took up the NBC’s part, a very significant decision of her career as the ABC’s show was cancelled after 18 episodes.
She made her TV debut in NBC's ‘Saturday Night Live’ in 1975 and worked in the iconic show for five years. She was a hard working and dedicated professional unlike several others who lost themselves to drug addiction and alcoholism.
She left the show in 1980 to explore other opportunities. In the mean time, she worked in a Broadway play, ‘Candida’, with Joanne Woodward in 1981 and its TV adaptation in 1983. She also starred in two movies over the same time period, ‘How to Beat High Cost of Living’ (1980) and ‘ O.C. and Stiggs’ (1985).
In 1984, she grabbed the most significant role of her career in the ABC sitcom ‘Kate & Allie’. She got the part of an independent and divorced mother, ‘Allie Lowell’, alongside Susan St. James, who played the role of ‘Kate’. The show was widely appreciated and she quickly rose to fame with its success. The show aired from 1984 to 1989.
After the show was cancelled in 1989, she returned to the stage with a Broadway production, ‘Love Letters’.
She got her next big break in the year 1996 with the NBC sitcom ‘3rd Rock from the Sun’, in which she played the character of Dr. Mary Albright. The show aired from 1996 to 2001.
In 2003, she appeared in the television adaptation of the classic drama, ‘Our Town’, alongside Paul Newman. In 2006, she played the role of an unstable mother in the ABC’s sitcom ‘Crumbs’, but the show was cancelled after a few episodes.
Continue Reading Below
In 2009, she played the role of Paul Rudd’s mother in the movie ‘I Love You, Man’. She also appeared in the CBS sitcom ‘Unforgettable’ as Dr. Joanne Webster in 2012.
Major Works
Among her prominent works is her portrayal of various characters in the show “NBC’s Saturday Live” from 1975 to 1980. Her most eminent appearances included the role of ‘Mrs. Lupner’, ‘Prymaat Conehead’ and as a co-anchor of ‘Weekend Update’.
Another major appearance of her career was in the sitcom ‘Kate & Allie’ from 1984 to 1989. Her display of the shy, reserved and progressively independent single mother won the love and respect of critics and viewers.
One of her notable performances was in the sitcom ’3rd Rock from the Sun’ from 1996 to 2001. She was much appreciated for portraying the role of a human doctor, Dr. Mary Albright, amid an alien family.
Awards & Achievements
In 1984 and 1985, she was honored with consecutive Emmy Awards in ‘Best Lead in a Comedy Series’ category for her riveting performance in the CBS sitcom ‘Kate & Allie’.
She was included in the “Top Prime Actors and Actresses of All time” list of 1986.
She served as a U. S. Committee National Ambassador for UNICEF.
She received Emmy nominations in 1978 and 1979 for her performance in NBC’s ‘Saturday Night Live’.
Personal Life & Legacy
She married Patrick Francis Lynch, a TV producer, on April 2, 1975. The couple was blessed with a daughter, Tess Curtin Lynch, in 1983.

See the events in life of Jane Curtin in Chronological Order