Advanced Search
James Alexander Hamilton was an American lawyer and the fourth child of Alexander Hamilton, one of the ‘Founding Fathers of the United States.’ James Hamilton’s father was killed in a duel with the then Vice President Aaron Burr. A graduate of ‘Columbia University,’ Hamilton went on to practice law for several years. During the ‘War of 1812,’ he served as an Inspector and Brigade Major in the ‘New York State Militia.’ In 1829, he served as acting United States Secretary of State for less than a month and was later appointed as ‘U.S. Attorney for the Southern District of New York.’ He entered politics as a member of the ‘Democratic Party’ and supported Andrew Jackson. Along with Jackson, he opposed the ‘Second Bank of the United States’ which was modeled on his father’s ‘First Bank of the United States.’ Hamilton married Mary Morris and had six children including Alexander Hamilton Jr., who served as the Secretary of the ‘United States Legation’ at Madrid.

Angelica Hamilton
14th April In History
DID WE MISS SOMEONE?
CLICK HERE AND TELL US
WE'LL MAKE SURE
THEY'RE HERE A.S.A.P
Quick Facts 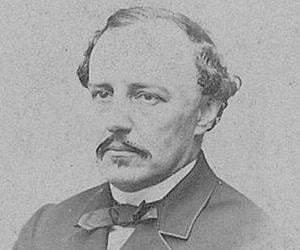 American People
Male Lawyers
American Lawyers
American Lawyers & Judges
Aries Men
Childhood & Early Life
James Alexander Hamilton was born on April 14, 1788. He was the fourth child and third son of Alexander Hamilton and his wife Elizabeth Schuyler Hamilton. Elizabeth co-founded New York City’s first private orphanage and served as its deputy director. Hamilton had seven siblings, namely John Church Hamilton, Philip Hamilton, Colonel Alexander Hamilton Jr., Angelica Hamilton, Eliza Hamilton Holly, William Stephen Hamilton, and Philip (also known as Little Phil).
Hamilton, who looked up to his father, had fond memories of his childhood. His family went through a crisis when Alexander Hamilton had a duel with the sitting Vice President of the United States Aaron Burr. Alexander Hamilton was mortally wounded in the duel which took place on July 11, 1804. He was then taken to his friend William Bayard Jr.,’s house where he breathed his last. Alexander Hamilton’s wife and children, including the 16-year-old James Hamilton, were present at his bedside at the time of his death.
James Hamilton attended the ‘Columbia University’ from where he graduated in 1805. He then studied law and was eventually admitted to the ‘New York State Bar Association’ in 1809. He started practicing law in Waterford, New York.
Continue Reading Below
Career
In 1810, Hamilton relocated to the city of Hudson in New York where he continued practicing law for many years. Meanwhile, he was inducted into the ‘New York State Militia’ during the ‘War of 1812.’ He served as a Brigade Major and Inspector during the war.
From March 4, 1829, Hamilton served as the acting United States Secretary of State until Martin Van Buren assumed office as the tenth U.S. Secretary of State on March 28, 1829. During his short tenure as the acting Secretary of State, Hamilton dealt with many issues including relations with Eastern Europe. He also got involved in the banking policy, reorganization of the treasury department, and appointment of cabinet members. On April 3, 1829, he was recruited as U.S. Attorney for the Southern District of New York.
Surprisingly, Andrew Jackson received support from Hamilton in opposing the ‘Second Bank of the United States.’ The bank was modeled on the ‘First Bank of the United States,’ which was championed by James Hamilton’s father Alexander Hamilton.
In a letter written to Jackson in 1830, Hamilton pointed out several supposed flaws with the ‘Second Bank of the United States’ and suggested the formation of a substitute bank. The arguments he made against the bank were similar to those made by Andrew Jackson.
Hamilton said the ‘Second Bank of the United States’ was subversive to liberty. He also said the election process was influenced by the bank. Moreover, he asserted that forces working against the United States could be controlling the bank as its stock was owned mostly by foreigners. He called the bank ‘unconstitutional’ as the Congress did not have the power to form it.
He came up with a book of memoirs in 1867 in which he gave details of his father’s career and personal life. He also included the details of his father’s friends and foes in the book. In the preface of the book, Hamilton had mentioned the reason behind publishing the book. He said the book was published to save his father’s reputation which was under threat because of the aspersions of Thomas Jefferson and Martin Van Buren.
Family, Personal Life & Legacy
Hamilton married Mary Morris on October 17, 1810. Mary Morris belonged to the prominent Morris family of Morissania. She was the daughter of Robert Morris and Frances Ludlam. Her great-grandfather Lewis Morris was an early colonial governor of New Jersey. Her grandfather Richard Morris was the Chief Justice of ‘New York Supreme Court,’ while her grand-uncle Lewis Morris was a signer of the ‘United States Declaration of Independence.’
Recalling his first few years of marriage with Mary, Hamilton once said he and his wife faced financial problems and hardships but remained determined to overcome their problems. He also said that they had great faith in their future. Hamilton considered those hardships as the most fortunate occurrences of his life as it forced him to learn the value of economy and self-denial.
James Hamilton and Mary Morris had five children, namely Elizabeth ‘Eliza’ Hamilton, Frances ‘Fanny’ Hamilton, Alexander Hamilton Jr., Mary Morris Hamilton, and Angelica Hamilton. While Elizabeth ‘Eliza’ Hamilton was named after James Hamilton’s mother, Angelica Hamilton was named after his sister. Elizabeth married George Lee Schuyler, the son of American politician Philip Jeremiah Schuyler. After Elizabeth’s demise in 1863, George married her sister Mary Morris. While Frances was married to George Russel James Bowdoin, Angelica was married to attorney and political figure Richard Milford Blatchford.
Hamilton’s only son Alexander Hamilton Jr., became a lawyer in New York City and co-founded a law firm. He also served as the Secretary of the ‘United States Legation’ at Madrid for a couple of years. He was married to Angelica Livingston, a member of the prominent Livingston family. Angelica was the daughter of a popular lawyer and politician named Maturin Livingston.
On September 24, 1878, Hamilton died in Irvington, New York. His mortal remains were buried at the ‘Sleepy Hollow Cemetery,’ in New York. Hamilton had constructed a large home in the affluent suburban village of Irvington. He named it ‘Nevis’ in honor of his father’s birthplace. The house was later given to ‘Columbia University’ by Mrs. T. Coleman DuPont to establish a horticultural and landscape architecture center. It is currently operated by ‘Columbia University’ as ‘Nevis Labs,’ a physics and biological research center.