(The Most Recognized and Popular Wrestler of the 1980s)

Terry Gene Bollea, popularly known by his ring name Hulk Hogan, is an American professional wrestler, musician, actor, television personality, and entrepreneur. The wrestler can be easily recognized by his large frame, long white hair, handlebar moustache, and trademark feather boas. Growing up, he was an aspiring musician and a baseball player, but later chose wrestling as his forte. He received his training from the famous trainer Hiro Matsuda; on the first day of training, Matsuda broke Hulk Hogan’s leg. Hogan returned as soon as his leg healed and in doing so, earned the respect and admiration of the coach. Upon joining WWF, Vince McMahon wanted his character to be a red-haired Irish wrestler and wanted him to dye his blonde hair, to which Hogan refused. Eventually, he became very popular and garnered huge fan following who he referred to as Hulkamaniacs. He also became famous for his four "demandments": training, saying prayers, eating vitamins, and believing in oneself. His career got a big boost early on when he appeared alongside Sylvester Stallone in Rocky III. John Cena
DID WE MISS SOMEONE?
CLICK HERE AND TELL US
WE'LL MAKE SURE
THEY'RE HERE A.S.A.P
Quick Facts

He was born on August 11, 1953, in Augusta, Georgia, USA, to Pietro Bollea, a construction foreman, and Ruth V, a dance teacher. The family moved to Port Tampa, Florida, when he was quite young.

He pitched in the ‘Little League Baseball’ in his childhood, but an injury ended a probable baseball career. He also played fretless bass guitar for nearly a decade for Florida-based rock bands.

He attended the Hillsborough Community College�and the University of South Florida�from where he dropped out to focus on music. He formed the band Ruckus�in 1976 with a couple of other musicians.

A lot of wrestling competitions were organized around Florida; wrestlers would head to the bars in Florida where Ruckus�performed. Jack and Gerald Brisco, brothers and tag team partners, noticed Hogan and were impressed by his physique.

Motivated by the Brisco brothers, Hogan started training under Hiro Matsuda, who was known for training wrestlers for ‘Championship Wrestling from Florida’ (CWF). 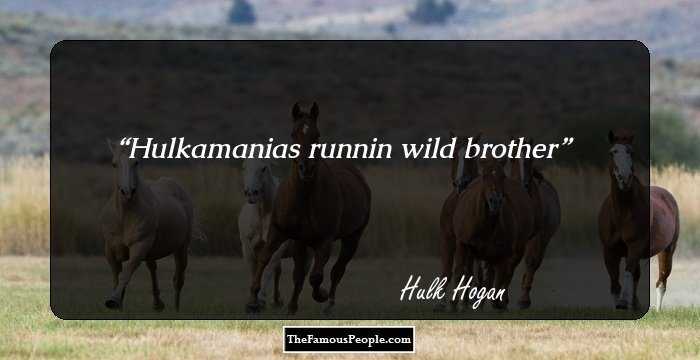 Continue Reading Below
Career
After training for a year with Matsuda, Hogan fought Brian Blair on August 10, 1977. When things didn’t work out with Matsuda, he left him and CWF.
Hogan decided to partner with his friend Ed Leslie (Brutus Beefcake) to form a tag-team and joined ‘Louie Tillet’s Alabama Territory.’ In Alabama, they wrestled as ‘The Boulder Brothers.’

They quit ‘Tillet’s Territory’ for ‘Continental Wrestling Association’ (CWA) in Memphis when promoter Jerry Jarrett offered them $800 a week.

In 1979, Vincent McMahon gave him an opportunity to join WWF. In his first match at WWF, he defeated Harry Valdez. His first big match with Andre the Giant happened in 1980 in which Hogan was defeated.

He also participated in the ‘New Japan Pro Wrestling’ in the 1980s, where he displayed more traditional and technical wrestling maneuvers and adopted the ‘Axe Bomber’ as his finishing move. The Japanese loved and admired him and gave him the nickname ‘Ichiban’ (Number 1).
He achieved super-stardom when he won his first ‘WWF Heavyweight Championship’ belt in 1984 after defeating the Iron Sheik. He remained the WWF champion for 1,474 days from 1984 to 1988.
He won the ‘Royal Rumble’ matches in 1990 and 1991, becoming the first wrestler to win consecutive rumble matches.
Hogan pinned Sgt Slaughter at ‘WrestleMania VII’ in 1991 for his third ‘WWF Championship’ title. However, he lost the title to The Undertaker at the ‘Survivor Series.’ After a mere six days, Hogan won it back but due to Rick Flair’s intervention, the title was declared vacant.
Continue Reading Below
He joined Ted Turner’s ‘World Championship Wrestling’ (WCW) in 1994 and defeated Ric Flair in his debut match to become the ‘WCW World Heavyweight Champion.’ After 15 months of successfully defending the title, he lost it to The Giant, but the title was later declared vacant on contract clause basis.
He won his second ‘WCW Heavyweight Championship’ after defeating The Giant in 1996 and after a year, he lost it to Luger by submission. Only five days later, he regained the title, before losing it to Sting. The title was declared vacant after several controversies; Sting won it eventually at the ‘Superbrawl VII.’
He won his fourth ‘WCW Heavyweight Championship’ in 1998 by defeating Savage in a much-interrupted ‘no disqualification match,’ and eventually lost it to Goldberg later that year.
He defeated Kevin Nash for his fifth ‘WCW Heavyweight Championship’ in 1999. ‘Nature Boy’ Ric Flair bested him in a ‘Steel Cage First Blood Match’ at ‘WCW Uncensored’ to take the title the same year. His final ‘WCW Heavyweight Championship’ came in 1999 when he defeated Savage.
He returned to WWF in 2002 at the ‘No Way Out’ event. He won his sixth ‘WWF Championship’ at ‘Backlash,’ before losing it to The Undertaker at ‘Judgment Day.’
He won his first ‘WWE World Tag Team Championship’ with Edge as his partner in 2002. Shortly after, Brock Lesnar won against Hogan when the latter lost consciousness courtesy a bear hug. Despite Hogan losing his consciousness, Lesnar thrashed him mercilessly. As a result, Hogan went on a hiatus.

He defeated Vince McMahon in ‘WrestleMania XIX’ in 2003, which left Vince furious. Subsequently, he made Hogan sit out the remainder of his contract. Hogan disguised himself as Mr. America and debuted on SmackDown, after which Vince McMahon made several unsuccessful attempts to reveal his true identity.

After the SmackDown show went off-air, Mr. America took off his mask to reveal his true identity and quit the WWE show in 2003.

In addition to being a wrestler, he has also acted in several movies, including ‘Suburban Commando,’ ‘Rocky III,’ ‘Mr. Nanny,’ ‘No Holds Barred,’ ‘Spy Hard,’ and ‘Santa with Muscles.’
Bollea opened a beachfront restaurant called ‘Hogan's Beach,’ situated in the Tampa area, in 2012.
He was honored at ‘Madison Square Garden’ during a live WWE event on February 27, 2015.
Awards & Achievements
Hulk Hogan was inducted into the WWE Hall of Fame in 2005.

�Hulk Hogan become a 12-time world champion:�six times with the WWE and another six with the WCW (World Championship Wrestling).

Hulk Hogan married Linda Claridge on December 18, 1983 and together they have two children, a daughter named Brooke and a son named Nick. After the couple separated in 2007, he went onto marry Jennifer McDaniel in 2010. Hulk and Jennifer divorced in late 2021. He shared this information in February 2022. In the same social media post, he revealed the name of his girlfriend, Sky.

See the events in life of Hulk Hogan in Chronological Order