Gloria Gwynne Gilford is an American former actress known for her roles in TV shows like ‘A New Kind of Family’, ‘The Young Lawyers’, and ‘The Waverly Wonders’ and films like ‘Beware! The Blob’, ‘Satan's School for Girls’, ‘Fade to Black’, and ‘Masters of the Universe’. After retiring from acting, Gilford earned a degree in psychotherapy and currently owns a practice in Studio City, Los Angeles. A native Californian, Gilford made her debut as an actress in an episode of ‘The Courtship of Eddie's Father’ in 1969. Three years later, she debuted on the big screen in ‘Beware! The Blob’, a comedy-horror film directed by Larry Hagman. She was prominently active in the 1970s and early 1980s, sharing screen space with the likes of Barnard Hughes, Dennis Christopher, and Dolph Lundgren. In the late 1980s, she left acting to join her daughter in the pursuit of a degree in psychotherapy. Her husband is actor Robert Pine, with whom she has two children, actor Chris Pine and psychotherapist Katherine Pine.
Continue Reading Below 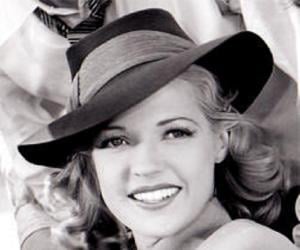 American People
Psychologists
American Women
California Actresses
University Of California, Los Angeles
Career
In 1969, Gilford made her acting debut in a season one episode of the ABC sitcom ‘The Courtship of Eddie's Father’. A year later, she made a guest appearance in a season one episode of NBC’s ‘Then Came Bronson’. She played Mary Douglas in an episode of CBS’ drama series ‘Medical Center’ (1970) and Dora Lou Fowler in an episode of in CBS’ western drama series ‘Gunsmoke’ (1971). She appeared in two episodes of ABC’s legal drama series ‘The Young Lawyers’, portraying two different characters.
In 1972, she debuted on the big screen in Larry Hagman’s comedy horror ‘Beware! The Blob’. Also starring Robert Walker, Richard Stahl, and Richard Webb, the film is the sequel to the 1958 film ‘The Blob’. While the film received lukewarm response upon its release, it and its predecessor have since achieved cult status. In 1973, she guest-starred in the ABC crime-drama series ‘The F.B.I.’. That year, she was also cast in the telefilm ‘Satan’s School for Girls’. Directed by David Lowell Rich, the film revolves around a young woman who is trying to understand the circumstances in which her sister committed suicide. She worked with Philip Burns and Robert Emhardt in the 1977 telefilm ‘The Chopped Liver Brothers’ and Michael Lerner and Frederic Forrest in the 1978 telefilm ‘Ruby and Oswald’.
She was cast as Linda Harris in the short-lived NBC sitcom ‘The Waverly Wonders’, which aired from September 7 to October 6, 1978. Gilford made her return to the big screen in the 1980 psychological film ‘Fade to Black’, portraying Officer Anne Oshenbull. Between 1979 and 1980, she played Abby Stone in eight episodes of the ABC sitcom ‘A New Kind of Family’.
Gilford worked opposite her husband in his show ‘CHiPs’ (1979-81). She was cast as Eva Taylor in a season four episode of ABC’s mystery television series ‘Hart to Hart’. In the 1986 telefilm ‘Kate’s Secret’, she co-starred with Meredith Baxter Birney, Ben Masters, Georgann Johnson, Tracy Nelson, and Shari Belafonte. Her last screen appearance was in the 1987 superhero flick ‘Masters of the Universe’. As with her debut film, her final movie was received negatively by the critics and the audience alike but has since become a cult classic.
In the late 1980s, Gilford decided to retire from acting, and along with her daughter, successfully pursued a degree in psychotherapy. She is currently a licensed psychotherapist with a practice in Studio City, Los Angeles.
You May Like

Leo Actresses
American Actresses
Women Psychologists
Actresses Who Are In Their 70s
Continue Reading Below
Family & Personal Life
Gwynne Gilford was born on July 27, 1946, in Los Angeles, California, USA, to lawyer, actor, and producer Max M. Gilford and actress Anne Gwynne. She has a brother named Gregory. She was 18 years old when her father passed away. Her mother never remarried and started to lose her health in the 1990s. She eventually had to move into the Motion Picture Country Home. Anne Gwynne passed away on March 31, 2003, at the Motion Picture Country Hospital, following complications from a stroke. Gilford is a descendant from Russian Jewish immigrants from her father’s side and of English, Welsh, and French ancestry from her mother’s.
Gilford married actor Robert Pine on September 6, 1969. She has portrayed the wife of his character, Sgt. Joe Getraer, in several episodes of the crime-drama ‘CHiPs’. Their daughter, Katherine Pine, was born on September 24, 1972. Like her mother, she is also an actress turned therapist. She has appeared with her father in the 1998 telefilm sequel to ‘CHiPs’, ‘CHiPs ’99’. At present, she works as a marriage and family therapist in Studio City, Los Angeles.
Gilford and Pine’s son, Chris, was born on August 26, 1980. He is presently one of the biggest stars of Hollywood. Some of his memorable roles include Captain James T. Kirk in the rebooted Star Trek film series, Steve Trevor in the superhero film ‘Wonder Woman’ (2017), and Robert the Bruce in the 2018 Netflix film ‘Outlaw King’.
Recommended Lists: