Gus Kamp is an American actor most known for his role in Disney sitcom ‘Best Friends Whenever’. He plays the role of Barry Eisenberg, a teen genius whose invention enables best friends Shelby and Cyd to travel back and forth in time. Before landing a lead role in the Disney series, he has acted in theatre and also appeared in commercials. He is a trained stage actor who took part in many plays and musicals including ‘Annie’, ‘Guys and Dolls’, ‘Charlie and the Chocolate Factory’, and more. For over a year, he appeared in print ads and television and radio commercials for Toys R Us. In 2011, he was a panelist on Fresh Perspectives with Beck Bennett, a talk show featuring kids discussing current events. The same year, he played Ryan Freeman, the son of a gamer trying to make it as a professional, in ‘The Streetfighter’. Gus, who loves horror stories, landed roles in a number of horror short films and TV series in the next few years, including ‘The Sleepover’ and ‘Deadtime Stories’. He started his YouTube channel in September 2013 and posts mostly gaming videos. He mentions that his channel is purely for fun and he doesn't intend to monetize the platform by introducing ads. Jaeden Lieberher
Actors #10711
Film & Theater Personalities #25453
Continue Reading Below
DID WE MISS SOMEONE?
CLICK HERE AND TELL US
WE'LL MAKE SURE
THEY'RE HERE A.S.A.P
Quick Facts

American People
Colorado Actors
Cancer Actors
American Actors
Actors Who Are In Their 20s
The Meteoric Rise To Stardom
Gus Kamp started to show his acting skills at a very early age. When he was just three years old, he acted out a scene from ‘Star Wars’ for his family. He started learning magic tricks when he was 9 years old, and would often perform tricks for family and friends at various occasions. However, Gus recognized his love for acting when he participated in a Shakespeare festival at his elementary school. He soon started performing on stage with Catchpenny Theater in Denver. At the age of ten, his exceptional talent was recognized by a national talent agency, which chose him to perform an opening skit for popular comedian David Cross in front of 3,000 people. Travelling to Los Angeles, he soon started auditioning for student films, national commercials, movies and television. At the age of eleven, he finally moved to LA and started taking acting lessons at The Young Actor's Studio. In 2013, Gus secured a role alongside high profile actors Matthew Broderick and Kristin Chenoweth in an untitled CBS comedy series, which was later cancelled. However, his performance in the pilot of the show didn't go unnoticed. He bagged roles in short films and made guest appearances in a number of television shows before being cast in Disney's ‘Best Friends Whenever’ in 2015. He also made guest appearance in Nickelodeon's comedy ‘Henry Danger’ in the episode "Let's Make a Steal".

American Film & Theater Personalities
Cancer Men
Continue Reading Below
What Makes Gus Kamp So Special
A talented actor, Gus has charmed the audience with his good looks and natural acting since he was very young. Interestingly, none of his family members were ever into acting and his mother actually has a crippling stage fright. Gus, on the other hand, has always been thrilled by the thought of going on stage, and loves to improvise when he doesn't have a scripted line. A successful actor now, Gus has not given up on polishing his acting skills and continues to visit The Young Actor's Studio regularly. According to him, while he does his job as a professional actor on the sets, he needs to learn his craft in the acting class. Apart from his love for acting, Kamp enjoys writing scripts, poetry and short stories.

Beyond Fame
Despite the fact that Gus is most popular for starring in the Disney series ‘Best Friends Whenever, in 2015, this was not his first role for Disney. He was first selected for a TV series on Disney in 2013, but the series was later cancelled and made into the 2014 TV movie ‘Fairest of the Mall’. He played the role of Barry, a nerdy teen genius. The producers of the show were so impressed with Gus that they included his character into the upcoming series about time-travelling teenage girls, ‘Best Friends Whenever’.

Originally just on story, but too good not to post @iccydrip @mightbeernie

Behind The Curtains
Gus Kamp was born on July 5, 1999, in Denver, Colorado. He has spent his early years in Denver, often moving to Los Angeles for auditions and shooting. His family finally moved to Los Angeles in 2010 after he became more involved in his acting career. He has an older brother Henry and a younger brother Ernie. For a long time, he was in a relationship with actress Charlene Geisler whom he met in 2013; but the couple recently broke up. The reason behind their break up is not known. Gus has been featured in Charlene's YouTube channel many times. He is currently rumored to be dating Erin Murray, whom he met in the summer of 2016 at The Young Actor's Studio.

Trivia
His younger brother played a younger version of his character in Disney's Best Friends Whenever. 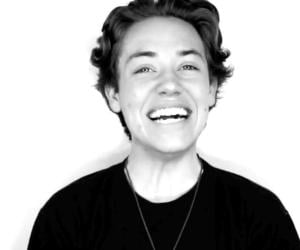