(One of the Greatest Female Stars of Classic Hollywood Cinema)

Advanced Search
Greta Garbo starred in movies of both the silent and the talkies eras, one of the few artists who made the transition very successfully. She is remembered for her elusive persona and husky voice. She was not just beauty but matched it with her intelligence and love for independence. Despite the fact that most of her movies were MGM productions; she would not let the banner unduly exploit her popularity. In fact, she was perhaps the first actor to assert herself using her fame. At the same time, she would go any length to ensure that nothing affected her performance by being punctual at the sets and always well prepared for the role she was to essay. She could romance, play the vamp or shine in a comic role with ease. Her role as a prostitute in ‘Camille’ is considered by critics to be her best. It is said of her acting technique that her eyes did all the acting. She introduced the method of underplaying expressions which was innovative, unique and much ahead of the time. Starting from a small role in a Swedish movie till the time she retired her career was one of unmatched success. Despite her immense popularity, she could never win an Oscar for her performances. Ingrid Bergman
DID WE MISS SOMEONE?
CLICK HERE AND TELL US
WE'LL MAKE SURE
THEY'RE HERE A.S.A.P
Quick Facts

American Celebrities
Swedish Celebrities
American Women
Swedish Women
Virgo Actresses
Swedish Actresses
Childhood & Early Life
Greta Garbo was born, on September 18, 1905, as Greta Lovisa Gustafson, in Stockholm to Karl and Anna. She had a brother Sven Alfred and sister Alva Maria.
Her father was an untrained labourer and the family led an impoverished life. In 1918, she discontinued her schooling to take care of her ailing father. His death two years later worsened the family’s economic situation. 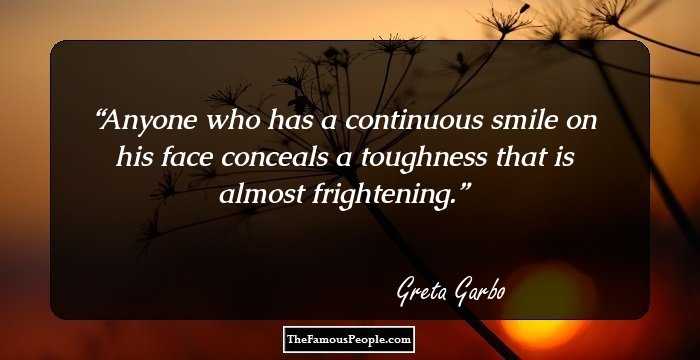 Continue Reading Below
Career
Greta Garbo started working as a sales woman in a departmental store at the age of fifteen. Her innate acting ability was discovered when she featured in an advertisement promoting shorts for men.
In 1922, she enrolled as a student on scholarship at the celebrated ‘Royal Dramatic Theatre’, but she dropped midway from the course after meeting Mauritz Stiller, the famous Swedish film director.
Stiller became her mentor and persuaded her to change her surname to Garbo. In 1924 Stiller cast her in his film ‘The Legend of Gosta Berling’.
She accompanied Stiller to America ostensibly to act in his film but their partnership failed to materialize. Her first American hit was ‘The Torrent’ in 1926.
Her resounding success enabled her to negotiate for a pay which touched record levels. She would choose to work with directors, producers and cinematographers of her own choice.
’Anna Christie’ released in 1930 was her first sound movie. She proved her critics wrong and the audience loved her husky seductive voice. She was nominated for an ‘Academy Award’ for her role in the movie.
In 1931 she acted in and as Mata Hari opposite Ramon Navarro, the Mexican star. ‘Garbomania’ was at its zenith with this film.
‘Camille’ released in 1936 was about a Parisian courtesan who falls in love with a French noble man. Her subtle and very restrained acting was regarded as her best ever by critics.
By the late 1930s her popularity began to wane. Though some of her films did well reasonably commercially in America, she no longer had the same appeal in Europe.
Continue Reading Below
The 1941 comedy ‘The Two-faced Woman’ was her very last film. She was disappointed with the negative reviews she received despite its box-office success. 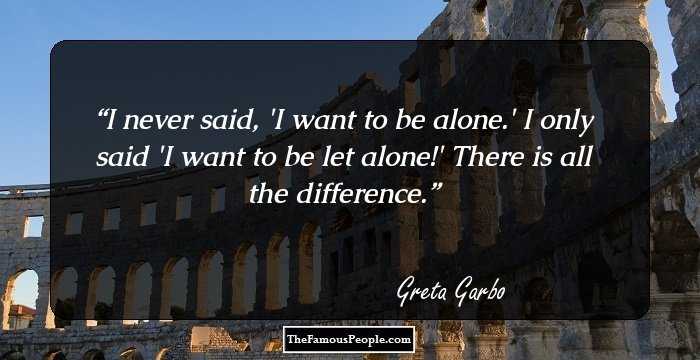 Quotes: Never, I
Major Works
The 1932 multi starrer, Grand Hotel was her most commercially successful film. It grossed $2,250,000 at the box-office. The film won an ‘Academy Award’ for the best picture that year.
Her performance in the 1935 MGM production ‘Anna Karenina’ as a woman entwined in an extra-marital love affair and love for her own son whom she is prohibited from seeing, was critically well received.
Awards & Achievements
She was presented with the ‘New York Film Critics Circle Award for Best Actress’ thrice- for ‘Anna Karenina’, ‘Ninotchka’ and for ‘Two-Faced Woman’.
She was awarded an ‘Academy Honorary Award’, "for her luminous and unforgettable screen performances", in 1954.
In 1983, she was made a ‘Commander of the Swedish Order of the Polar Star’ by order of King Carl XVI Gustaf, the King of Sweden.
In 2005 commemorative stamps with her image was issued jointly by the postal services of the U.S and Sweden.
The Central Bank of Sweden announced in 2011 the issue of 100 krona note with her image on it.
Continue Reading Below 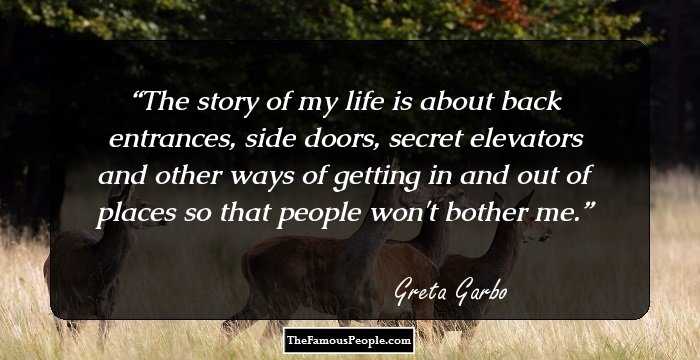 Quotes: Life, Me
Personal Life & Legacy
She was described as the Swedish Sphinx by the American media for her beautiful yet enigmatic facade. She detested any kind of publicity and preferred solitude.
She was romantically linked with many of her co-stars and with at least one woman. She remained unmarried. She had a platonic relationship with the English photographer Cecil Beaton and ventriloquist Edgar Bergen.
Her silence during World War II was misconstrued to be unpatriotic. Later it was discovered that she actually helped the Allied cause by identifying some prominent Nazi sympathisers in Stockholm.
She became an U.S citizen in 1951, dabbled in real estate and art and spend a major part of her life travelling all over Europe.
Even though she had a successful recovery from breast cancer, she died due to renal failure on 15 April, 1990.
Trivia
A popular actor, she made MGM agree to closed sets; she and the camera were entirely surrounded by black curtains during the filming of close-ups.
There was a much publicized gossip about her love affair with a co-star. She very nearly married him. But the wedding did not take place as she did not turn up for the ceremony.

Quotes By Greta Garbo | Quote Of The Day | Top 100 Quotes

See the events in life of Greta Garbo in Chronological Order