Graeme Murray Walker was an English journalist and motorsport commentator. He was born and brought up in Birmingham, England, to a Formula One enthusiast and sales director of a motorcycle company, Graham Walker. Interestingly, Walker did commentary for Formula 1 initially with his father for BBC. Walker attended the Royal Military Academy Sandhurst and left the army after gaining the title of captain. He worked in advertising for a major part of his life and continued to do it even when he started commentating for Formula 1. Throughout the 1970s, Walker did full-time commentary for BBC until 1997 and then he joined ITV Network and worked along Martin Brundle in commentating for F1. He announced that he was to retire from Formula 1 in 2000 but returned back to the microphone in 2005 with BBC. He also wrote books on Formula One titled Murray Walker’s Grand Prix Year with Hazelton Publishing for many years. He was known for his interesting analysis and enthusiastic take on Formula 1 and people used to love him for his conduct and positive approach in everything. Jeremy Clarkson
Journalists #282
Media Personalities #922
DID WE MISS SOMEONE?
CLICK HERE AND TELL US
WE'LL MAKE SURE
THEY'RE HERE A.S.A.P
Quick Facts

British Celebrities
British Men
Male Journalists
British Journalists
Male Media Personalities
Childhood & Early Life
Murray Walker was born in Hall Green, Birmingham, England, to Graham Walker. His father was a sales competition director at the Rudge-Whitworth Motorcycle Company and was a motorcyclist for Norton Motorcycle Company.
Walker went to the Highgate School and attended the Royal Military Academy Sandhurst during the time of World War II. Later he participated in the Battle of the Reichswald but left the army after getting the rank of captain.
After leaving the army, he worked for Dunlop and Aspro in advertising and then joined the Masius ad agency. He kept working with the company even after he had a successful career as a commentator. 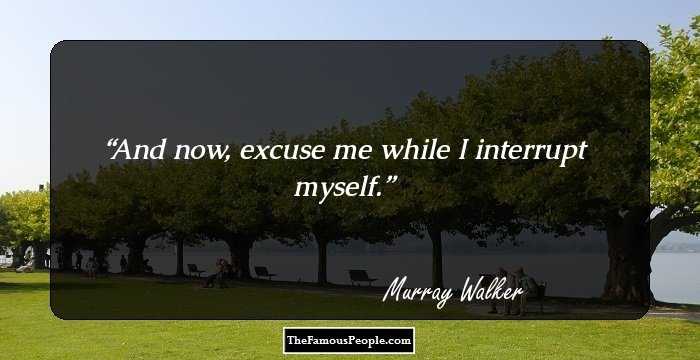 The Hottest Male Celebrities With The Best Abs
Career
In 1949, Walker got his first big commentating fixture for the British Grand Prix, Silverstone for the BBC Radio. He did it along with Max Robertson. Before this, he did a little stint at the Shelsley Walsh hillclimb.
After this, Murray started doing Formula 1 commentary full-time for the rest of 1970s for BBC. He used to do the commentary with his father and it was only after his death in 1962 that he got his position of chief motorcycling commentator.
From 1980-1993, during his Formula 1 coverage, Murray collaborated with the World Champion James Hunt. Initially they were not able to hit it off on screen but soon the pair became hit and worked for almost 10 years for BBC together.

From 1987-1997, Murray wrote annuals for the Grand Prix season for Hazelton Publishing titled Murray Walker’s Grand Prix Year. These books are very famous amongst the Formula 1 enthusiasts for his expert writing and analysis.

From 1993-1996, ex-Formula 1 driver Jonathan Palmer collaborated with Walker in the commentary box and the pair worked together for almost 3 years. From time to time other people like Alan Jones too joined him.
In 1997, Murray left BBC and joined ITV because of the transfer of television rights for the UK coverage of the Formula 1. His co-commenter was Martin Brundle, a retired Formula 1 driver. The pair worked together until Murray’s retirement.
In 2000, Murray publically announced that he would retire from commentary for the Formula 1 races. The next year, for United States Grand Prix, he did his final commentary. He was awarded an authentic brick from ‘The Brickyard’.
In 2005, it was announced that Walker would return back to commentating and he again became a part of the BBC coverage of the new Grand Prix Masters series. He commentated on the opening race in South Africa the next year.
In 2006, he was declared as the chief ambassador for David Ormerod Hearing Centers. Also, he became the team ambassador for the half season for the Honda Racing F 1 team. He also covered Clipsal 500 V8 Supercar.
Continue Reading Below
In 2007, he became a part of the DVD documentary ‘TT: Centenary Celebration with Murray Walker’, for which he visited the Isle of Man. He also commentated on the European Grand Prix for BBC Radio 5 Live.
In 2008, Walker became a web columnist for the BBC recovered coverage of Formula 1. In the same year, he was honored in Birmingham, and was presented with a ‘Star’ on the Walk of Stars on Broad Street.
In 2011, he appeared on the ‘Free Practice 3’ as a co-commentator for BBC F1 on BBC Five Live and BBC one. He also made an appearance on the Qualifying show with Jake Humphrey, Eddie Jordon, David Coulthard and Martin Brundle. 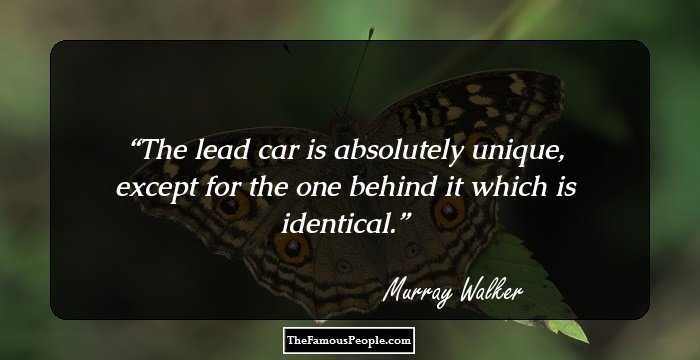 Murray Walker married Elizabeth in 1955. The couple had no children. In 2011, a documentary was premiered on BBC 2 with the title Life in the Fast Lane. It was based on his life, showing Walker’s contribution in changing the shape of the Formula One races. It showed all the aspects of his life.

In 2013, Walker fell and broke his pelvis. It was the same time when he was diagnosed with lymphatic system cancer. He was 89 at the time and the doctors reassured that he will be alright. He underwent chemotherapy. 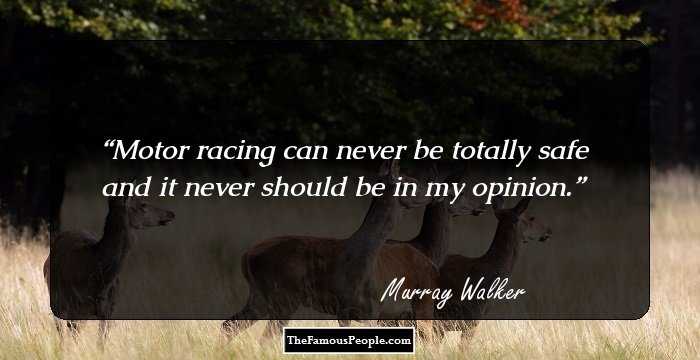 Quotes By Murray Walker | Quote Of The Day | Top 100 Quotes

See the events in life of Murray Walker in Chronological Order