Advanced Search
Gloria Swanson was one of the most prominent stars in the U.S. who reigned supreme during the silent film era. She was an actress and producer, highly acclaimed for her stylish fashion statements. She started out as an extra in films and gradually worked her way up to become one of the biggest film personalities of her times. Initially she was able to get only small roles in Hollywood movies, but things changed forever once she was spotted by the legendary director Cecil B. DeMille who cast her as the leading lady in his films ‘Don't Change Your Husband’ and ‘Male and Female’. From a lowly extra, she got transformed into one of the most sought-after actresses within a couple of years—she was so much in demand that film makers gave in to her every whims and fancies for the fear of losing her. It was not just her luminous beauty or acting skills that pulled the audiences towards her, but also her bold dressing style which made her one of the most photographed women in the world. Her dresses and accessories were often adorned with beads, jewels, and feathers. She was a fashion icon whom women all over America loved to imitate. During the later part of her career, she also tried her hand at theatre and television.

Priscilla Presley
27th March In History
DID WE MISS SOMEONE?
CLICK HERE AND TELL US
WE'LL MAKE SURE
THEY'RE HERE A.S.A.P
Quick Facts

American Celebrities
Illinois Actresses
Aries Actresses
American Actresses
Women Film & Theater Personalities
Childhood & Early Life
Gloria Swanson was born in Chicago to Joseph Swanson, a soldier and his wife Adelaide. She was of mixed ancestry.
Her father’s army job meant that the family moved frequently and as a result she had attended several schools by her teens, the most notable among them being the Hawthorne Scholastic Academy.
As a school student she loved singing and participated in a number of school plays. She was beautiful, had a lovely voice and a stylish sense of dressing. 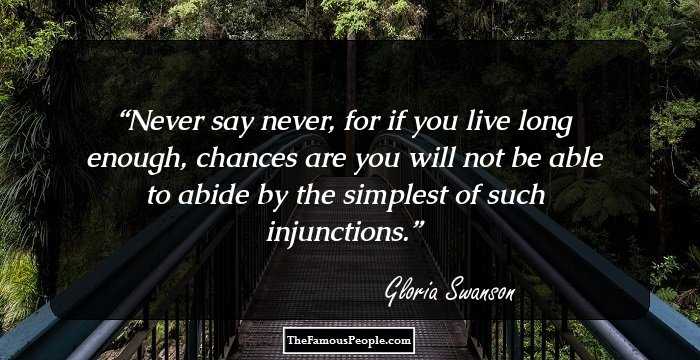 Quotes: You, Never, Will
Continue Reading Below
Career
Her film career happened by chance. She had gone to visit Essanay Studios, Chicago, with her aunt where her good looks and stylishness got noticed by the directors and she was immediately offered the role of an extra.
She made her film debut as an extra in ‘The song of Soul’ in 1914, and went on to work as an extra in many other Essanay movies. She got a small role in ‘His New Job’ where she co-starred with Charlie Chaplin.
She moved to California in 1916 to pursue more substantial roles and signed a contract with Paramount Pictures in 1919.
The legendary director Cecil B. DeMille recognized the young woman’s capabilities and cast her as the leading lady in his 1919 film ‘Don't Change Your Husband’.
Her convincing portrayal of Leila Porter in ‘Don’t Change Your Husband’ was followed by more leading roles: ‘Male and Female’ (1919), ‘Why Change Your Wife?’ (1920), and ‘The Affairs of Anatol’(1921).
She became a much sought after actress and one of the best paid ones in Hollywood by the mid 1920s. She starred in the French-American costume comedy-drama, ‘Madame Sans-Gene’ in 1925 which was produced and filmed in France.
She turned producer in 1927 with ‘The Love of Sunya’, in which she also starred. The first time producer faced a lot of hurdles in the making of the film which ultimately fared badly at the box office.
She produced and starred in another film, ‘Sadie Thompson’ in 1928 which also featured Lionel Barrymore and Raoul Walsh. It revolved around the life of a “fallen woman” desperate to start her life anew.
In the late 1920s, the trend was shifting from silent movies to talkies. In 1929, she made her talkie debut in ‘The Trespasser’, which was also released in silent version.
Continue Reading Below
Her career began to decline in the 1930s after a series of flops like ‘What a Widow!’, ‘Indiscreet’, ‘Tonight or Never’, etc.
She shifted permanently to New York in 1938 and began exploring other fields like television, theatre, painting and sculpting, political activism, etc.
She made a comeback in 1950 with ‘Sunset Boulevard’ in which she played the role of a faded silent movie star who dreams of making a successful return to the screen.
Major Works
‘Sadie Thompson’, a 1928 silent film produced by Swanson, in which she also starred, was one of her better known films. The film dealt with the controversial topic of a prostitute seeking to redeem her life. It was both a critical and commercial success and earned Swanson an Academy Award nomination for Best Actress in a Leading Role.
Her first talkie, ‘The Trespasser’ (1929) became a smash hit. Her role as Marion Donnell earned her an Academy Award nomination for Best Actress in a Leading Role.
Her role as Norma Desmond, a faded silent movie star in ‘Sunset Boulevard’ was hailed as her best ever performance. The 1950 movie was her first big hit after 20 years. The film is widely considered a classic, one of the greatest of American films.
Awards & Achievements
She won the Golden Globe Award for Best Actress in a Motion Picture for her portrayal of Norma Desmond in ‘Sunset Boulevard’ in 1951.
She was named the Best Actress-Foreign Film by the Italian National Syndicate of Film Journalists in 1951 for the film ‘Sunset Boulevard’.
Personal Life & Legacy
Swanson had been married six times, with five of her marriages ending in divorce. She was also involved with many other men throughout her acting career. She had three children.
She became a vegetarian in 1928, and was an advocate of macrobiotic diets.
She died from a heart ailment at the age of 84 in 1983.
Trivia
Her autobiography, ‘Swanson on Swanson’ was published in 1980 which became a national best seller.
She was the first star to earn back-to-back Oscar nominations in two consecutive years for "Sadie Thompson" in 1929 and for "The Trespasser" in 1930.
One of her most talked about affairs was with the politician Joseph Kennedy which was an open secret in Hollywood.

See the events in life of Gloria Swanson in Chronological Order