(Italian Painter and Founder of the ‘Scuola Metafisica’ Art Movement)

Advanced Search
Giorgio de Chirico was an Italian artist who co-founded the genre of ‘metaphysical painting’ which had a profound influence on the Surrealists. Born in Rome, he developed a keen interest in art in childhood and was also moved by philosophical writings. As a young artist, he was enthused by the European Symbolist artists and their use of dream-like imagery. His earliest signature works combined a Symbolist sensibility with his love of the classical antiquities of ancient cities and his philosophical musings on the true nature of reality. He held many exhibitions of his work around the world and was much praised for his brilliant and intricate interpretations of everyday life which were expressed vividly through his paintings. He introduced the world to the style of metaphysical painting and his enigmatic scenes of empty cities, menacing statues, mysterious shadows and strange combinations of everyday objects inspired the artists of the Surrealist movement in the 1910s. However, the element of mystery in his paintings diminished after 1919, when he eventually began painting in a more realistic and academic style. Although his later works failed to recapture the unsettling originality of his early paintings, he is still recognized and praised for his influence on both, the Surrealists and THE later generation of artists. His contribution to modern art of the 20th-century is invaluable Masaccio
DID WE MISS SOMEONE?
CLICK HERE AND TELL US
WE'LL MAKE SURE
THEY'RE HERE A.S.A.P
Quick Facts

Founder/Co-Founder: with Carlo Carrà and Giorgio Morandi, founded the style of Metaphysical painting.

Italian Celebrities
Male Writers
Cancer Writers
Italian Writers
Italian Artists & Painters
Childhood & Early Life
He was born on July 10, 1888, in the town of Volos, Greece, to Evaristo de Chirico, a railway engineer, and his wife, Gemma Cervetto, a Genovese woman. He had a sister who died in childhood and a younger brother, Andrea, born in 1891.
Initially, he studied art at the ‘Higher School of Fine Arts’ in Athens. But after the death of his father in 1905, the family moved to Munich, where he attended the Academy of Fine Arts.
At the Academy, he also took special interest in the philosophical writings of ‘Arthur Schopenhauer’ and ‘Friedrich Nietzsche’. In 1909, he went to Italy, traveling to Milan and Turin, and later settled in Florence. 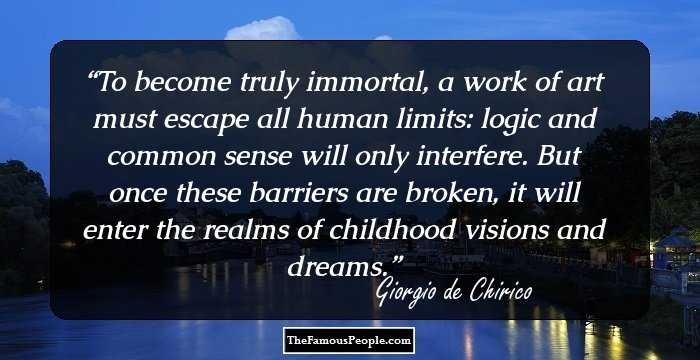 Quotes: Will, Dreams, Art
Continue Reading Below
Career
In 1910, he painted the first of his 'Metaphysical Town Square' series, ‘The Enigma of an Autumn Afternoon’, and later in the same year he painted ‘The Enigma of the Oracle’.
In 1911, he traveled to Paris, France where he exhibited his work and met a number of influential avant-garde artists and writers, including Pablo Picasso’and Constantin Brancusi.
In 1912, his works were exhibited at the ‘Salon d’Automne’ and the ‘Salon des Indépendants’. He received much appreciation for his ambiguously ominous scenes of deserted piazzas, and also sold his first painting, ‘The Red Tower’.
He produced many of his most important and influential paintings during his Parisian stay of 1911–15. These include: ‘The Soothsayer's Recompense’ (1913), ‘Love Song’ (1914), and ‘The Seer’ (1915).
In 1915, when he returned to Rome during the World War I, he was drafted into the Italian Army. Initially he was enlisted in military, but soon afterwards, he had a nervous breakdown and was assigned to a hospital at Ferrara.
During the same period, he painted some of his other works including ‘The Great Metaphysician’, ‘The Troubadour’ and ‘The Disquieting Muses’. In 1917, he met artist Carlo Carrà; and together the two artists developed the genre which they termed as ‘Metaphysical painting’. When the World War I ended, he moved to Rome.
In February 1919, he held his first solo show in Rome at Casa d’Arte Bragaglia. His work was greatly admired by the newly formed Surrealist school of artists and writers, who were fascinated by dream analysis and the subconscious mind.
However, in the 1920s, he started working in a neo-traditional style inspired by Raphael and Titian, old masters of Renaissance period. Eventually, he turned against the modern art and broke ties with the Surrealists.
He held his first exhibition in New York City in 1928, and shortly afterwards, in the same year, he also held an exhibition in London.
Continue Reading Below
In 1929, he wrote essays on art and other subjects and also published a novel entitled 'Hebdomeros, the Metaphysician'.
In 1939, he adopted a neo-Baroque style influenced by Rubens. His later works were not able to earn the same critical acclaim as did those from his metaphysical period. His reputation was also damaged when the false backdated copies of his works infiltrated the art market.
In 1944, he settled permanently in Rome. The following year, his autobiography ‘Memorie della mia vita’ was published. 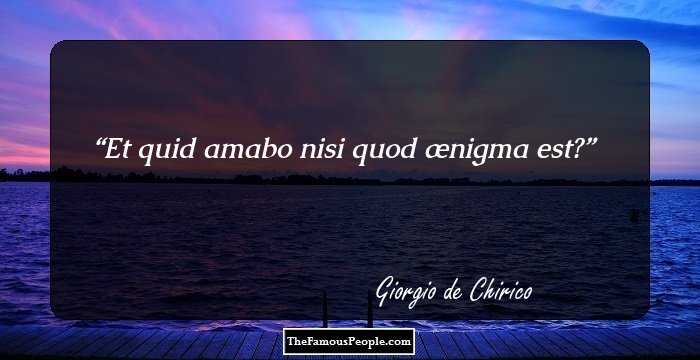 Major Works
Some of his most important metaphysical works include: ‘The Enigma of an Autumn Afternoon’, ‘The Soothsayer's Recompense’ and ‘The Mystery and Melancholy of a Street’. They are considered extraordinary for the haunting, brooding moods evoked by their images.
Awards & Achievements
In 1948, he was elected as an honorary member of the Royal Society of British Artists.
Personal Life & Legacy
In 1925, he met and married a Russian ballerina, Raissa Gurievich, and the couple moved to Paris.
In 1930, he met Isabella Pakszwer Far, a Russian, who later became his second wife. In 1932, the couple moved to Italy, finally settling in Rome in 1944.
He died on November 20, 1978, in Rome, Italy, at the age of 90.