Giacomo Casanova was an adventurer, writer and a spy, born in eighteenth century Venice. He is probably one of the most misunderstood men in history. Thanks to his amorous escapades his name has long being associated with womanizers and libertines. Indeed, he had his first taste of sexual pleasure when he was just a kid and from then on it had become a passion for him. Over the time, he also became an ardent gambler. Later, he travelled all over Europe and at each place managed to get entry into the highest social circle. Although he himself did not have any social standing at each place he managed to associate with monarchs, aristocrats and cardinals. He also had close connection with people like Voltaire, Goethe, and Mozart. Besides, he was a successful spy and later introduced the lottery system in France. He would also have been a good physician if he were allowed to pursue medicine. His memoire ‘Histoire de ma vie’, written at the end of his life, provides one of the most authentic documentation of European society of that era.
Continue Reading Below 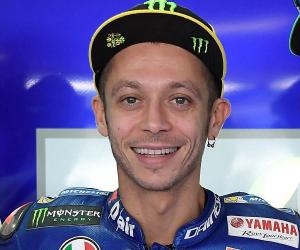 Italian People
Italian Men
University Of Padua
Aries Writers
Male Writers
Childhood and Early Life
Giacomo Casanova was born in Venice on April 2, 1725. His father Gaetano Giuseppe Giacomo Casanova was an actor and ballet dancer while his mother Zanetta Farussi was a comedic actress. The couple had five children, out of which Giacomo was the eldest.
Casanova’s father died in 1733 and since his mother travelled a lot with her troupe Casanova and his siblings were mostly looked after by their grandmother Marzia Baldissera. At the age of nine he was sent to a boarding house in Padua. Casanova was very bitter about this.
At Padua, young Casanova was placed under Abbe Gozzi, his tutor. From him, he not only received tuitions in academic subjects, but also learnt to play violin. When he was twelve years old he was enrolled at the University of Padua and graduated from there at the age of seventeen.
Although he had passed out with a degree in law, he was more interested in medicine and had also studied moral philosophy, chemistry and mathematics. He also picked up the habit of gambling during his stay here. 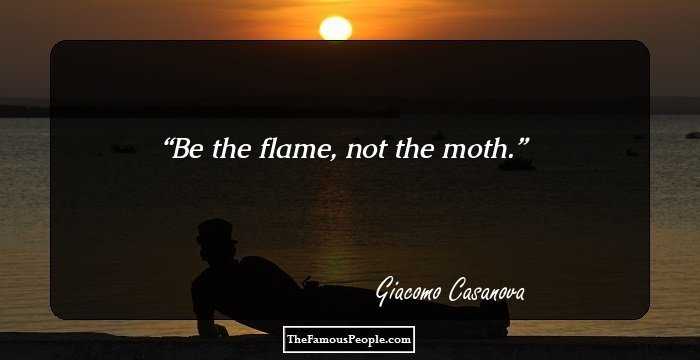 The Most Popular US Veterans
Early Career
Casanova started his career in clerical law as an abbe, a lower ranking clergyman. During this period, he caught the attention of 76-year-old Venetian senator Alvise Gasparo Malipiero. Malipiero introduced Casanova to the higher circles and taught him everything he needed to know.
By this time, Casanova had also become a libertine and was caught dallying with actress Teresa Imer, whom Malipiero was trying to seduce and so Casanova lost his patronage. After that Casanova entered the Seminary of St. Cyprian in Padua for a short period, but was soon arrested for his debts.
On coming out of the prison he was employed as a scribe with Cardinal Acquaviva in Rome. Here he also met the pope. However, this job was also short lived. He was made a scapegoat after a scandal broke out and fired.
He next bought a commission and became a military officer for the Republic of Venice. However, he found the job boring and the payment not adequate for his bohemian lifestyle. Consequently, he sold the commission and went back to civilian life.
He now had considerable money and decided to become a professional gambler. However, he soon lost all his money and got an employment as a violinist in the Teatro San Samuele, an opera house in Venice.
While working there he met senator Bragadin and saved his life by going against the instructions of the physician. The grateful senator took him under his patronage. Casanova began to live in his home along with three of the senator’s bachelor friends.
For three years he worked nominally as a legal assistant in Venice. However, his maximum energy was spent on sexual liaisons. He also gambled a lot and played many practical pranks. Soon enough these backfired on him and at the end of three years he again had to flee.
Casanova next landed in Parma and went into a relation with a woman named Henrietta. When she left him he felt despondent and came back to Venice, taking up gambling as a profession once more. This time, the luck was with him and he made a lot of money. 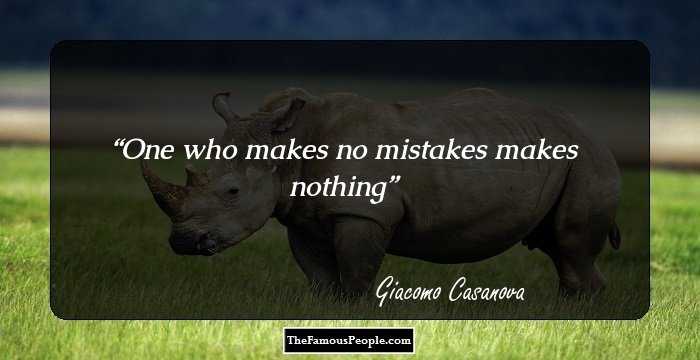 Continue Reading Below
The Grand Tour
With money so gained, Casanova went on Grand Tour of Europe. On the way he stopped at Lyton and joined the Freemasons there. He found their secret rites quite interesting.
He reached Paris in 1750 and stayed there for two years. He spent the time learning French and getting himself acquainted with well-known people. In addition, he had numerous romantic liaisons, which was noted by the police.
From Paris he went to Dresden, where his mother used to stay. It is possible that he started his writing career here. One of his plays ‘La Moluccheide’ was staged here.
In Jail
He then went to Prague, from there to Vienna. Finally he reached Venice in 1753 and started a career as a magician, alchemist and an oculist. Very soon, he got involved in number of escapades. His record of blasphemies, seductions, fights, and public controversies became so huge that he was sentenced to jail in 1755.
The prison was housed in the Dodge’s Palace and was said to be inescapable. However, on October 31, 1756 he made a daring escape and reached Paris on January 5, 1757. 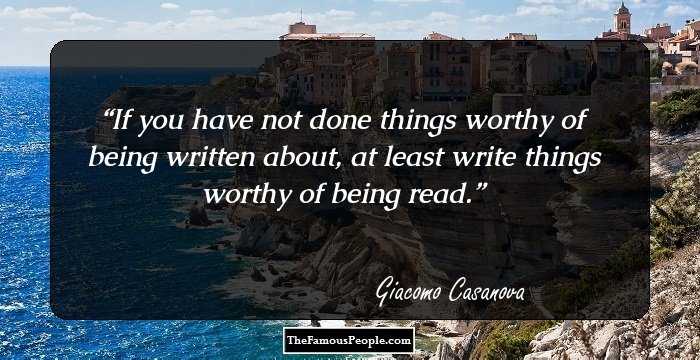 Quotes: You
In Paris
Casanova was now more mature. He knew that he would have to stay here for a long time and on the advice of one of his well wishers, who as at that time Foreign Minister of France, he decided to use his capabilities to raise funds for the state in lieu of which he hoped to incur instant favor.
To achieve his end, Casanova introduced state lottery in France and at the same time, became its best salesman. As a result, he not only helped to fill the state’s coffer, but also acquired huge fund and gained admission in the higher circle.
In Paris, he became very popular for his supposed knowledge in occultism and duped many nobles. This was also the time when he was sent on his first spying mission by the Government of France. He made good amount of money out of it.
Continue Reading Below
He also made huge amount of money out of selling French bonds in Amsterdam and was offered French citizenship as well as a pension. Casanova refused the offer and opened a business. Very soon he was heavily in debt and was imprisoned.
Travels Across Europe
Once out of prison in 1760, he went first to Holland. From there he went to Southern Germany, Switzerland; and then to Marseille, Genoa, Florence, Rome, Naples, Modena, and Turin. All the while he used the pseudo name of Chevalier de Seingalt.
During his tour he met many renowned men such as Albrecht von Haller and Voltaire. However, he spent lot more time in bed with various partners.
In 1763, Casanova went to England trying unsuccessfully to sell the concept of lottery and had an audience with King George III. Here too he had liaisons with various partners and was soon afflicted by venereal disease. Ultimately, he left England sick and penniless.
Next he went to Belgium and from there to other parts of Europe including Moscow and St Petersburg. At each place, he tried to sell his idea of lottery in vein. After a brief stay in Warsaw he returned to Paris in 1767. However, he was very soon expelled by the King for his notoriety.
By that time Casanova had become infamous all over Europe. He was, however, little known in Spain and so he headed for that country. Although he used his usual tactic he could make little headway here and so decided to return to Venice.
Return to Venice.
Although initially people showed interest about him, no financial opportunity came his way and doors of the higher circle were closed for him. However, one of his old patrons gave him a small pension, which was not enough for him. Income from his writing was also very little.
He now began another stint in spying; this time for Venice and was paid for each information he provided. Ultimately, in 1783, he was expelled once again; this time for poking fun at the nobility.
Casanova first went to Paris and from there to Rome. However, he was not given permission to enter Venice immediately and used the time in Rome to translate Homer’s Iliad into Tuscan Italian language. and to write two other books. Ultimately he received permission to enter Venice in September 1774, eighteen years after his exile.
Last Days
Casanova then went back to Paris and took up various positions under renowned people. Finally, he went to Bohemia to become a librarian at the Castle of Dux. The job offered him security; but Casanova was so bored that he contemplated suicide; but later decided he would write his memoirs first. He completed the first of his memoirs 'Histoire de ma vie', in 1792.
By that time, his reckless life began to take its toll. Although he visited nearby cities and met few well known people his closest companions were a few fox terriers. Finally, at the age of 73, Casanova died in Dux, on June 4, 1798.
You May Like

Quotes By Giacomo Casanova | Quote Of The Day | Top 100 Quotes

See the events in life of Giacomo Casanova in Chronological Order