Advanced Search
Francine Joy Drescher, better known as Fran Drescher, is an American actor, comedian, writer, and activist. She is famous for her performance as ‘Fran’ in the hit TV series ‘The Nanny’ (1993–1999) and for her iconic nasal voice and a thick New York accent. After making her screen debut with a small role in the 1977 film ‘Saturday Night Fever,’ she starred in ‘American Hot Wax’ and Wes Craven’s horror tale ‘Stranger in Our House’ in 1978. She established her TV career with guest appearances in several series while, at the same time, gaining recognition for films such as ‘Gorp,’ ‘The Hollywood Knights,’ ‘Doctor Detroit,’ ‘This is Spinal Tap,’ and ‘UHF.’ However, she became a household name when she appeared as ‘Fran Fine-Sheffield’ in her own sitcom, ‘The Nanny,’ for which she was nominated for two ‘Emmy Awards’ and ‘Golden Globes’ each in the ‘Best Actress in a Comedy Television Series’ category, during the show’s run. A uterine cancer survivor, she is a vocal healthcare advocate and an LGBT rights activist. She is also known for her work as a public diplomacy envoy for women’s health issues at the ‘US State Department.’ She currently resides in Malibu, California, following her divorce from writer and producer Peter Marc Jacobson. American People
Jewish Actresses
Writers
Actresses
Comedians
Childhood & Early Life
Born on September 30, 1957, in Flushing, Queens, New York, to Sylvia, a bridal consultant, and Morty Drescher, a naval systems analyst, Dreshcher was raised in Kew Gardens Hills, Queens.
Her family originates from Southeast and Central Europe. Her maternal grandmother, Yetta, was born in Focsani, Romania. Her father’s family was from Poland. Her older sister Nadine’s family is Jewish.
In 1973, she became the first runner-up at the ‘Miss New York Teenager’ contest. After attending Flushing’s ‘Parsons Junior High,’ which has since been dissolved, she attended ‘Hillcrest High School’ in Jamaica, Queens. There, she met her future husband, Peter Marc Jacobson. They got married in 1978, when Drescher was 21, and divorced in 1999. Already aware of her passion for acting, she joined the school’s drama department to develop her talent further.
Ray Romano, who became a comedian later, also attended ‘Hillcrest High School’ and was her classmate. It is interesting to note that Drescher’s character ‘Fran Fine-Sheffield’ (from ‘The Nanny) and Romano’s character ‘Ray Barone’ (from ‘Everybody Loves Raymond’) met at a high-school reunion in an episode of ‘The Nanny.’
After graduating high school, she and Jacobson together attended ‘Queens College,’ under the ‘City University of New York,’ only to drop out after completing freshman year. They then joined a cosmetology school, which was more aligned with their career aspirations. 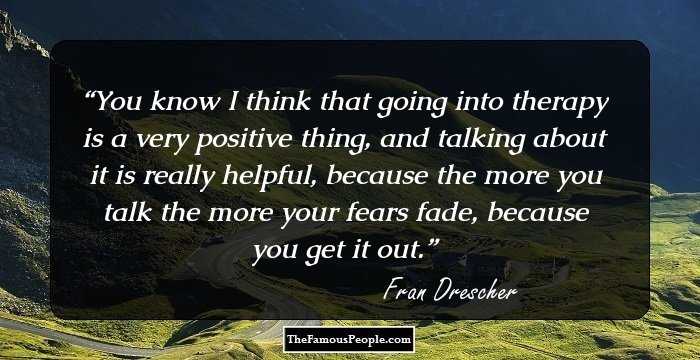 Continue Reading Below
Career
In 1977, Drescher had her first break, with a small role as a dancer named ‘Connie’ in the movie ‘Saturday Night Fever,’ in which she delivered the line “So, are you as good in bed as you are on the dance floor?” to John Travolta’s character. She gained more attention the following year, with films such as ‘American Hot Wax’ and ‘Summer of Fear.’
In the 1980s, she found moderate success as a character actor, with unforgettable roles in films such as ‘Gorp,’ ‘The Hollywood Knights,’ ‘Doctor Detroit,’ ‘The Big Picture,’ ‘UHF,’ ‘Cadillac Man,’ and ‘This is Spinal Tap.’ The last one featured her as publicist ‘Bobbi Flekman,’ her most memorable role in that decade. In 1985, she appeared as an interior decorator in a second-season episode of ‘Who’s the Boss?’ The same year, she appeared in the sitcom ‘Night Court.’ Her role was that of a woman with a dissociative identity disorder who switches from being a prude to a sexually charged woman, eventually ending up in a hotel with ‘ADA Dan Fielding.’
In 1990, Drescher appeared as ‘Roxanne’ in an episode of ‘ALF’, titled ‘Future’s So Bright I Gotta Wear Shades,’ playing the clueless wife of ‘Brian,’ who is unaware that her husband is a mob boss.
Following her role in the short-lived ‘CBS’ sitcom ‘Princesses’, she went on to voice ‘Peggy’ (the woman with the flower on her hat) in ‘The P Pals’ on ‘PBS’ till the mid-1990s.
Following this, she appeared in the comedy–drama ‘Jack,’ directed by Francis Ford Coppola. She then appeared in ‘The Beautician and the Beast’ the following year. She also worked as an executive producer for the movie. She was also seen in ‘Picking up the Pieces,’ co-starring Woody Allen.
In the 2000s, she marked her return to TV, with both guest and lead roles. After appearing as ‘Roberta Diaz’ in the short-lived ‘Good Morning, Miami’ in 2003, she returned 2 years later, with the sitcom ‘Living with Fran,’ which featured her as ‘Fran Reeves,’ a middle-aged mother of two living with a man half her age.
Later, in 2006, she lent her voice to ‘Pearl’ in ‘Shark Bait’, guest-starred in an episode of ‘Law & Order: Criminal Intent,’ and voiced a female golem in ‘The Simpsons’ episode ‘Treehouse of Horror XVII.’ The following year, she appeared in the US version of an Australian improvisational comedy series named ‘Thank God You’re Here.’
After some failed projects, namely, ‘The New Thirty’ (which did not materialize), ‘The Fran Drescher Tawk Show,’ and ‘Happily Divorced’ (which got canceled after 2 years), Drescher made her ‘Broadway’ debut in 2014, with the revival of Rodgers and Hammerstein’s ‘Cinderella.’ She replaced Harriet Harris as the stepmother. The 10-week engagement lasted till April 2015.
She has written the books ‘Enter Whining’ (1996), ‘Cancer Schmancer’ (2002), and ‘Being Wendy’ (2011).
Continue Reading Below
She has written a number of episodes of ‘Happily Divorced,’ ‘Dadi,’ and ‘The Nanny.’
She has directed a few episodes of ‘The Nanny’ and an episode of ‘Strong Medicine.’ 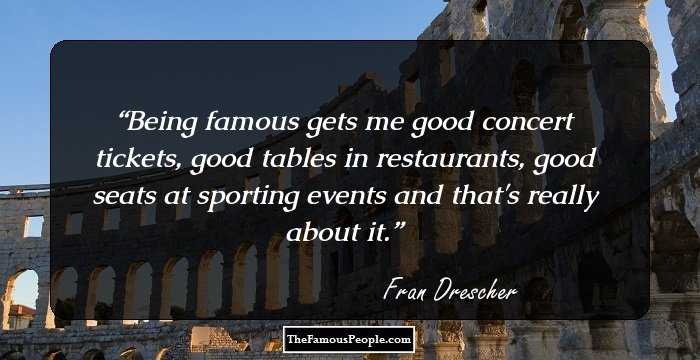 Major Works
She created her own TV show along with Jacobson. The show, named ‘The Nanny,’ aired on ‘CBS’ from 1993 to 1999. It catapulted Drescher to instant stardom and was about a woman, ‘Fran Fine-Sheffield,’ the nanny of ‘Margaret,’ ‘Brighton,’ and ‘Grace Sheffield,’ the children of a widowed father.
Awards & Achievements
Drescher has been endowed with the ‘John Wayne Institute’s Woman of Achievement Award,’ the ‘City of Hope Woman of the Year Award,’ the ‘Gilda Award,’ the ‘Hebrew University Humanitarian Award,’ and the ‘Albert Einstein College of Medicine’s Spirit of Achievement Award.’
In 2006, she was honored with the ‘City of Hope Spirit of Life Award,’ which she received from Hillary Clinton.
On April 10, 2010, she was made the guest of honor at the ‘Dancer against Cancer’ charity ball held at the ‘Imperial Palace’ in Vienna, Austria. There, she received her first ‘My Aid Award,’ for her achievements in support of cancer prevention and rehabilitation. 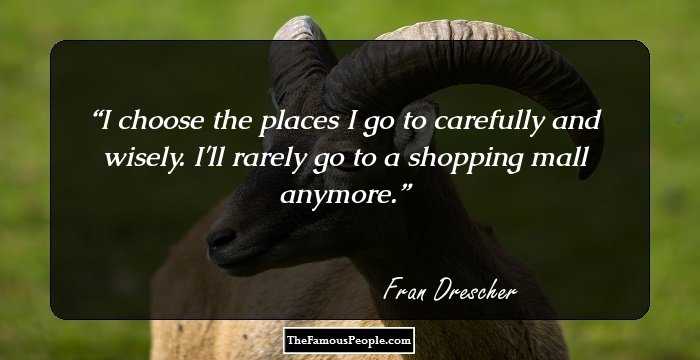 Family & Personal Life
In 1985, Drescher and a friend were raped at gunpoint by two robbers who broke into her home, while Jacobson was tied and forced to watch.
Drescher was married twice. She was initially married to Jacobson. They remained married from 1978 to 1999. She then got married to controversial scientist/politician Shiva Ayyadurai in 2014. They divorced in 2016. She remained friends with Jacobson even after they parted ways when he came out as gay. They continued to work together. To show her support, she advocated for LGBT rights.
A cancer survivor, she had been misdiagnosed by eight doctors in 2 years, before she got treated for uterine cancer. She later recounted her experiences in her book ‘Cancer Schmancer,’ to bring attention to early warning signs of cancer for both men and women.
Trivia
Drescher pitched her idea for ‘The Nanny’ to ‘CBS’ president Jeff Sagansky while sitting next to him on a flight to Paris.

Quotes By Fran Drescher | Quote Of The Day | Top 100 Quotes

See the events in life of Fran Drescher in Chronological Order